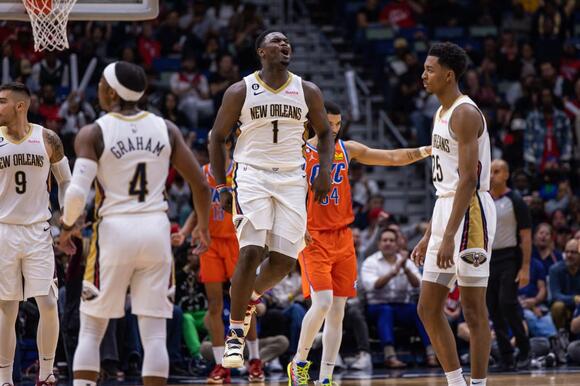 It took 100 games for Zion Williamson to be whistled for a technical foul as a member of the New Orleans Pelicans.

NEW ORLEANS - Zion Williamson's first 100 games with the New Orleans Pelicans have been downright historical. The NBA's 2019 first-overall pick said it's "been a journey" to hit that milestone in his fourth professional season.

There has been one surprise though, coming in the 100th game. Williamson got a technical foul.

It took a while to hit both the games play and technical fouls received achievements. Drafted in July 2019, the Duke alum did not make his professional debut until January 22, 2020. Williamson has remained humble it all and has not criticized the refs. Even on nights where Brandon Ingram and CJ McCollum are sidelined and Williamson ends up with only one free-throw attempt.

Williamson said after leading the Pelicans to a 105-101 win over the Oklahoma City Thunder, "I would say I think I've grown most maturity-wise and just seeing the game. I feel like my rookie year, I was more just using talent to get me by."

Rookies have to earn their stripes. All-Stars should get their calls, especially so for the most respectful to the refs. Zero technicals on the resume is just one sign of a player who never tries to show anyone up, including the officials. Shai Gilgeous-Alexander shot 18 free throws in the Smoothie King Center. Williamson got to the line for an and-1 situation with 44 seconds remaining in the game.

I asked Zion to share what the bench was saying to bring some calm to the situation once the technical was assessed early in the first quarter.

"You know what's crazy? For your to think about it, that's the logical way to think about it and I respect that. What was being said on the bench was 'Wow! They really tech'ed you up for that.' And man I wasn't expecting it. I think I was like shocked like oh I really got a tech. That might be my first one!"

"I'm never going to sit here and tell the referees how to do their job. Looking at it from the rules perspective, what I did was a technical because I did walk toward him and I did yell. So, respectfully, it was a tech but in the moment it was more like 'Damn! I really got a tech.'"

Refs will soon have to put some more respect on Williamson's name. Per ESPN stats:

New Orleans needed every bit of Zion's efforts to muscle past the pesky Thunder. For all of the weight placed on him by those outside of the locker room, Williamson is starting to come out of his shell on and off the court. Still, the hallway jokes about shooting as many "three's as free's" should not apply to Williamson on any given night.

The Pelicans scored 18 of their first 24 points from within the paint. There is too much photo evidence of fouls to ignore at this point but Williamson will not go on a referee witch hunt. It's a winding road to a championship. Learning how to get whistles without getting the wrong reputation is just one bump along the way.

"It's been a long journey. Would I have liked the journey to have gone like that? Absolutely not. I wish I could have played every game. But at the end of the day, I'm still grateful that I went through that. Because it helped me realize a lot mentally, spiritually, and just growing as a man."

Williamson continued, "So for me to finally hit a hundred games ... Think about it, I'm on three coaches. This is the first year where the locker room has looked somewhat the same player-wise. The thing I can take away from that is it's just good to kind of have just steady people around me now."

Kenny Smith details just how miserable the culture of the Sacramento Kings was, having spent 3 years with them
SACRAMENTO, CA・3 HOURS AGO
rolling out

NBA players confirm once again: They don’t like Trae Young

The Pelicans surrendered a 12-point first half lead and lost their sixth consecutive game on Wednesday night.
NEW ORLEANS, LA・2 DAYS AGO
FastBreak on FanNation

Joel Embiid is on the injury report for Saturday's game.
PHILADELPHIA, PA・1 HOUR AGO
The Big Lead

Brevin Galloway will miss a few games.
CLEMSON, SC・1 DAY AGO
All 76ers

Nuggets’ Nikola Jokic on Injury Report vs. Sixers on Saturday

Nikola Jokic is on the injury report for Saturday's game against the Sixers.
DENVER, CO・1 HOUR AGO
Pelicans Scoop

Pelicans are trying to get back on track defensively.
NEW ORLEANS, LA・2 DAYS AGO
Pelicans Scoop

Hernangomez Worth More To Pelicans Than 2nd Round Pick

ESPN tabs Peyton Bowen as a 'freshman worth following' in 2023

When Brent Venables and his staff pulled off the flip-flip of Peyton Bowen, it helped the Sooners secure their highest-rated recruiting class in the modern era. Beyond everything that transpired during the early signing period, Oklahoma earned a signature of a difference maker. Peyton Bowen is one of the best...
NORMAN, OK・54 MINUTES AGO
AZCentral | The Arizona Republic

The coronavirus pandemic put former Arizona Cardinals star Larry Fitzgerald on a path toward ownership of another sports franchise. Already holding a minority stake in the Phoenix Suns, Fitzgerald is also part owner of a team in a sport that has been played recreationally for decades: pickleball. Fitzgerald was looking...
PHOENIX, AZ・54 MINUTES AGO