After Being Turned Away From A Club Because Of Their Size, These Women Are Calling For A Change In Nightclub Policies 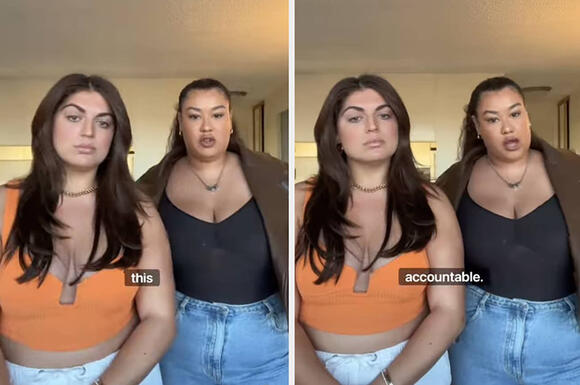 This is Ella Halikas (left) and Alexa McCoy (right) — two curve models who were out with friends when they say they were turned away from a club because of their size.

In a video that has gathered the collective attention of nearly 2 million viewers on TikTok, Ella and Alexa explained that on Nov. 2, the two ran into one another outside The Highlight Room, a Los Angeles club. Alexa invited Ella to join her group — a squad of 12 to 15 people — but, when Alexa attempted to file in after their friends, the bouncer purportedly put the rope down in front of her and said, "Not tonight."

"The promoter starts letting in the whole group of girls and right when it gets to me, the bouncer puts the rope in front, looks me up and down, and says, 'Yeah, not tonight,'" Alexa recalled in their now-viral video. "I let him know I was a part of the group he was letting in and he looked me up and down one more time and said, 'Yeah, not tonight.'"

"At that point it was extremely apparent what was going on and that I was being discriminated against because of the size of my body."

At this point, Ella says she tried to approach the bouncer next to clear up any possible confusion, but she was ultimately told the same. "I was like, 'What do you mean not tonight? I'm so confused.' ... He wouldn't give us an answer, we didn't know why."

BuzzFeed reached out to The Highlight Room for comment and received the following statement from their parent company, Tao Group Hospitality:

“We are aware of Ella and Alexa’s experience. The doorman on this particular evening worked for a third-party promotion company and we’ve removed this individual from the door effective immediately.

We have made several attempts to resolve the issue directly with Ella and Alexa and even scheduled a meeting within days to address their experience, which they unfortunately cancelled.

Our company does not tolerate discrimination of any kind. We are always appreciative of feedback on our operations and continue to work on how to improve our guest experience.”

According to Ella, both she and Alexa asked to reschedule their meeting with The Highlight Room but have yet to hear back since making this request.

When speaking to Ella about the situation, she says removing the doorman from his post is not enough. "I believe that removing the bouncer is just like removing a Band-Aid. It's a temporary fix to a bigger issue," the 25-year-old told BuzzFeed. "[The Highlight Room] has allegedly been notorious for turning away plus-size women and women of color for so long now. After hearing so many similar stories of this place, it's disheartening to see the way they are handling this situation."

Some of these similar stories mentioned come from comments on their post and private messages Ella says she received after their video went viral. "I have received over 500 personal messages and comments from others who have experienced similar situations," she said.

Not every one is about The highlight Room, which demonstrates a larger issue across nightlife:

"One story was about...a successful plus-size model and influencer, who tried to go to [a] NYC nightclub with her friends and they let in everyone else who was thinner, but would not let her in unless she paid $4,000 to enter."

"Other stories were of women who couldn't get into a club for their 21st birthdays and were so humiliated by this experience that they just never went to a club again. This type of discrimination is so damaging to people's self-worth and confidence."

And it's this exact prevalence that has inspired Ella to speak up and share her experience online. "To be honest with you, we're tired of playing it safe. We're tired of not speaking up about it. This has happened to me three other times. I know this has happened to [Alexa] before, and our other curve friends as well, and it is not OK."

"I wanted to share my story to give a voice to so many other women who may not have the platform to do so. Once this happened to us, I felt immediate sadness for all the other women who experience this so often and just never say anything about it," Ella said.

"I hope that by speaking up, I will encourage others to do the same. ... I'm glad to be starting this conversation, and applying the pressure on nightlife and clubs across the world, to make some serious changes within their establishments."

Since posting, Ella has considered ways forward and how clubs can ensure better treatment for all. "I would love to see new policies enforced at nightclubs, and possibly new sensitivity training for bouncers to complete in order to do their jobs successfully. This conversation is important to me — to ensure that no one else feels the way we did that night."

"There needs to be a new system in place entirely, where more people can step in and determine whether this is right or not to not allow someone from coming in. It should not just be up to one person at the door that holds all this power."

Geez, every time someone gets turned down the say, it’s discriminatory or racist. Move on, your 15 minutes of fame are OVER! Go back on Tik Tok and cry me a river, lol

as a doorman I turn away dozens of people a night .from bad attitudes, tattoo's that are not acceptable,semi- intoxicated, and stupidity, it's the clubs rules and choice to refuse service to whom they please, quit bit##ing...

It’s a private club girls. PRIVATE. They can do what they want. And ….I’m sure this story has more to it.

17 Screenshots Of Clueless Parents Who Made A Decision That Was, Well...Not The Best

Whatever you do, don't let your parent post on Facebook without supervision.
2 DAYS AGO
The US Sun

THE estranged wife of a trans rapist sent to an all-female jail said yesterday: “It’s a sham for an easier life.”. Shonna Graham said gender-switch Isla Bryson never mentioned feeling he was in the wrong body. It comes as Bryson, 31, switched gender after appearing in the dock...
1 DAY AGO
BuzzFeed

These just fill my heart with joy.
2 DAYS AGO
BuzzFeed

If you were considering an internet break, this article will be the final nail in the coffin.
2 DAYS AGO
BuzzFeed

22 Mistakes Workers Made That You Can't Even Be Mad At Because Technically, They Did Their Job

If "Oops, oh well" was a person.
2 DAYS AGO
BuzzFeed

23 People Who Woke Up, Decided It Was Everyone Else's Problem, And Chose To Be A Menace

I would pay good money to hear the mental gymnastics these people did to convince themselves that they were in the right.
1 DAY AGO
BuzzFeed

It's a good thing he was wearing underwear.
INGLEWOOD, CA・1 HOUR AGO
BuzzFeed

Such a beautiful way with words.
1 DAY AGO
BuzzFeed

Priyanka Chopra And Nick Jonas Just Might Have The Cutest Matching Tattoos, Because The Meaning Behind Them Is Beautiful

"When he’s around, everything feels like it’ll be okay."
1 HOUR AGO
BuzzFeed

"Is it tacky for my future sister-in-law to get engaged two months before my wedding? I feel like she should've gotten engaged months earlier or at this point just wait until after our wedding."
2 DAYS AGO
Yana Bostongirl

A baby born with an extra pair of arms and legs growing out of its torso has been hailed as a "miracle of nature" by people who believe the child to be the reincarnation of the Hindu goddess Lakshmi. The goddess is depicted as having multiple limbs and is the goddess of wealth, fortune, power, beauty, fertility, and prosperity.
4 DAYS AGO
BuzzFeed

Ed Sheeran Made His Manager Carry Around A Picture Of The Weasley Twins For A Year, And 14 Other Secrets Celebs' Teams Revealed

In her tell-all book, Kris Jenner's former nanny claimed the momager "was grooming her children for their current celebrity status their entire lives."
23 HOURS AGO
BuzzFeed

Imagine going through life thinking like this.
2 DAYS AGO
BuzzFeed

Being A "Nice Guy," Meeting Strangers From The Internet, And 27 Other Things People Seriouslyyyy Regret From Their Teenage Years

"I just think about the wasted efforts and self-loathing I put myself through for absolutely no other reason besides an underdeveloped pre-frontal cortex."
WISCONSIN STATE・3 DAYS AGO
BuzzFeed

Black Women, Tell Us Why You Went Natural — And What You Love About It

We'd love to hear your story!
3 DAYS AGO
BuzzFeed

Not great, folks. Not great at all.
1 HOUR AGO
BuzzFeed

"His act of kindness changed her week. And in that moment, he changed my life — that was when I knew that he was it for me."
1 DAY AGO
BuzzFeed

“Don’t Trust Online Reviews”: The Internet Is Losing It Over What Guests Were Served On This “5-Star” $75 Dinner Cruise