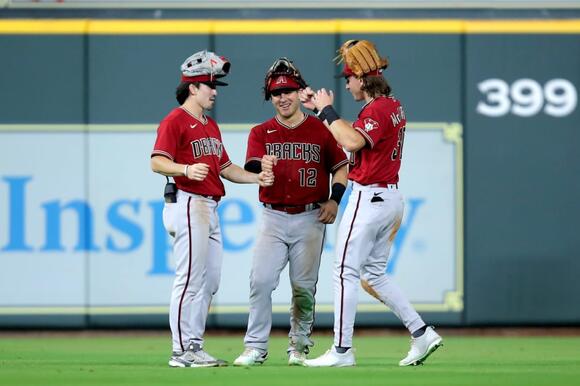 What are they worth and how do they rank?

The Diamondbacks glut of left handed outfielders and the probability they trade one of them has been a hot topic for a long time. But what is their trade value and how is it calculated?

Here is one simple method that is commonly used. Calculate the player's projected WAR, projected salary, and the value of WAR on the open free agent market, and arrive at a trade value, positive or negative achieved during the player's control years. (In the cases below that is up until they become free agents. Obviously the team may choose to extend some of these players before reaching free agency)

When contemplating or evaluating a trade, then you can apply the same methodology to the players coming back to see if it makes sense from a value standpoint. Of course teams value players differently, depending on their own needs and internal criteria. There is no one size fits all, but something like this can be a starting point for discussion.

Accordingly, here are our calculations for select D-backs outfielders, with comments:

With a surplus trade value of over $136 million, there is a reason that Corbin Carroll is deemed virtually untouchable. The above WAR projection is very conservative and reflects prospect uncertainty. Already projected to reach 3 WAR in 2023 , topping out at 4 WAR during his peak years may feel low. But with a major shoulder surgery in his past and a somewhat smaller build, other teams would likely factor those injury risks. Even with that, it's easy to see why Carroll would be almost impossible to trade. It would have to truly be the definition of  a blockbuster.

Daulton Varsho had a 5-WAR season last year, but projections systems will factor in regression to the mean, and that's reflected here. However there is a higher confidence level for Varsho to maintain a 3+ WAR projection  due to more MLB playing time. We also see baseball economics at work here. Varsho has only four years of control left, compared to the six years for Carroll and the players to follow. Still, $77 million is a whopping trade surplus. If they move Varsho, they need to get a premium player back.

Grouping these two players together at approximately the same value feels right on many levels. Both are projected to be league average or slightly above in 2023, (2.4 and 2.3 WAR respectively).  But there is uncertainty with both, suppressing the trade value.

Alek Thomas has a an above replacement level floor due to his stellar defense, but teams will be wary of the fact that the D-backs optioned him to Reno last September due to a prolonged batting slump. He's hit throughout his minor league career however so there is justification to believe he will hit enough to generate at least this much during his control years.

Jake McCarthy had a very good season in 2022, hitting much better than Thomas. But the uncertainty with him arises from the fact that his "expected statistics" indicated there might have been some over performance. His defense is clearly inferior to Thomas' as well.  But his speed, strength, and athleticism are proven commodities and he should be able to tap into them going forward.

Dominic Fletcher has not yet played in the major leagues. Right now he profiles as a 4th outfielder, part time player. He would need to have an impressive major league debut to increase his trade value above this level.

Pavin Smith has essentially been a replacement level player in total in his career so far. With only one more season at pre arbitration wages, and lackluster track record his trade surplus calculation is negative. Some team may view him better than this of course. But if he gets an opportunity to play in MLB in 2023 he will need to perform much better than he has so far.

Low risk contracts that might produce a surprise performer
PHOENIX, AZ・1 DAY AGO