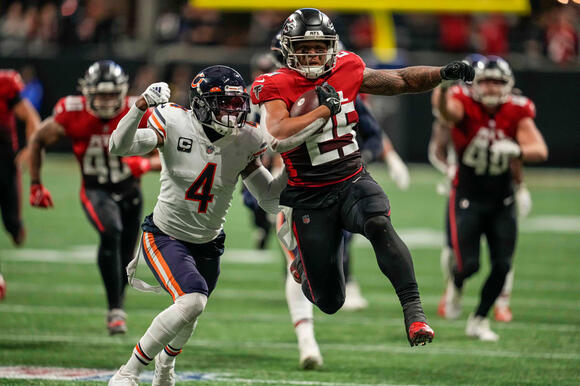 Eddie Jackson's injury involves Lisfranc ligaments in his foot according to NFL Network, and the severity is uncertain.

Despite unfounded speculation about an Achilles injury for Bears safety Eddie Jackson, it appears he has a Lisfranc injury in his foot.

The nature of the injury was reported Tuesday by NFL Network's Mike Garafolo. Whether this is just a Lisfranc ligament issue or also involves a broken foot wasn't reported.

This apparently is the reason the Bears said they're still awaiting word on the injury's severity.

Asked Monday whether Jackson was out for the last five games, coach Matt Eberflus couldn't offer much.

"If it does happen that way then we'll have to get some young guys ready to play," he said.

Jackson suffered the non-contact injury while dropping into coverage on a 54-yard TD pass to Garrett Wilson.

The younger guy would be Elijah Hicks. Hicks and DeAndre Houston-Carson were the only two healthy safeties the Bears had left at game's end Sunday.

The Lisfranc ligament is band of tissue connecting metatarsal and tarsal bones in the foot but it is not the Achilles.

If surgery is needed, then Jackson's season would be over but his recovery from that injury wouldn't be as great of an issue as coming back from Achilles surgery. If no surgery is needed, he'd still be likely to miss the rest of the year because he'd need to keep the foot in a cast for an extended period.

It's often said players can recover from an Achilles tear in about the time it takes for an ACL tear but coming back from Achilles surgery with full speed and mobility can sometimes take more than a full season.

The Bears signed Larry Ogunjobi in free agency before this season after he had Lisfranc surgery due to an injury in the playoffs. He couldn't pass the Bears physical in free agency but it had only been a short period since his surgery.

Ogunjobi has gone on to start 10 games for the Steelers this year, although not with the kind of impact statistically they might have liked. He has half a sack and two tackles for loss.

Jackson was leading the Pro Bowl fan voting for safeties in the NFC and has four interceptions, tied for third in the league.

Mock Drafts Say Bears Have a Problem and It's Houston

A scary scenario is developing in some mock drafts that suggests a great impact on whether the Bears can trade down.
CHICAGO, IL・2 DAYS AGO
BearDigest

What Bears Offensive Line Rankings Can Say for the Future

Startling rankings by ESPN and Pro Football Focus for the Bears offensive line and some of the linemen could indicate future moves.
CHICAGO, IL・12 HOURS AGO
BearDigest

One Insider Sees Bears Raking in Draft Picks and Offers

The need for quarterbacks early in the draft is likely to bring the Bears numerous trade offers says one ESPN insider.
CHICAGO, IL・4 HOURS AGO
BearDigest

Former Bears coach Matt Nagy at the Super Bowl described a reason for his firing that the current staff needs to know.
CHICAGO, IL・1 DAY AGO
BearDigest

Devin Hester is among the 15 players still hoping Thursday night to be named to the Pro Football Hall of Fame.
CHICAGO, IL・8 HOURS AGO
BearDigest

It seems the Bears quarterback has won over plenty of Wisconsin fans because his jersey No. 1 is No. 1 there for sales.
WISCONSIN STATE・3 HOURS AGO
BearDigest

Why Cornerback Crop in 2023 Draft Could Interest Bears

The Bears secondary improved but not to the point where they could ignore a wealth of cornerback talent in this draft.
CHICAGO, IL・16 HOURS AGO
BearDigest