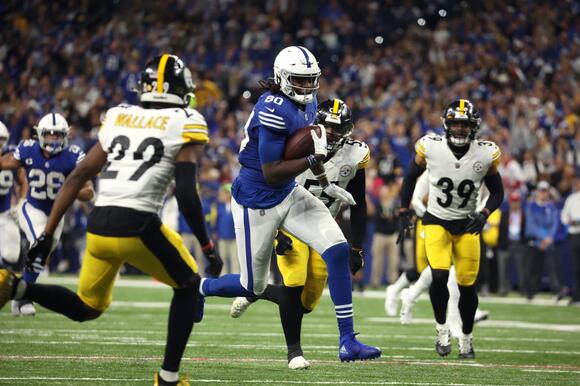 Although the Indianapolis Colts lost Monday night's game against the Pittsburgh Steelers, they learned something very valuable: if they throw the ball to Jelani Woods, good things happen.

Coming into the game, the rookie tight end out of the University of Virginia had been targeted only 13 times all season, hauling in seven of those passes for 79 yards and three touchdowns. He had two clutch touchdowns in Indy's big win over Kansas City in week 3, but hadn't been involved much in the Colts' offense beyond that.

That changed under the bright lights of Monday Night Football, as Jelani Woods became Matt Ryan's go-to target. Woods was targeted nine times and led the team with eight receptions for 98 yards, more than doubling his season-long receiving total. He averaged 12.3 yards per catch and had a pivotal 28-yard reception that set up a go-ahead touchdown for the Colts at the end of the third quarter.

Woods was targeted only once in the fourth quarter - a 17-yard catch at the beginning of a Indy's final possession, a drive that ultimately ended with Indianapolis turning the ball over on downs to end the game. Woods was not on the field for the 4th down play that decided the game.

That Woods could be a relied upon as unguardable pass-catching beast will come as no surprise to UVA fans, who saw him amass 598 receiving yards and eight touchdowns on 44 catches in just one season for the Cavaliers, earning First-Team All-ACC honors. Hopefully, the Colts learned on Monday night to lean more heavily on Jelani Woods, who certainly has a bright NFL future ahead of him.

Stay up to date on all the former Virginia athletes playing at the professional level here: Pro Hoos on Sports Illustrated

Wicks was selected the American team's WR Practice Player-of-Week by a vote of the team's defensive backs
CHARLOTTESVILLE, VA・1 DAY AGO
Cavaliers Now

The Hoos battle the Hokies in round two of the Commonwealth Clash on Saturday in Blacksburg
BLACKSBURG, VA・1 DAY AGO
Cavaliers Now

The Hokies diced up the UVA defense and defeated the Cavaliers at Cassell Coliseum for the third-straight year
BLACKSBURG, VA・20 HOURS AGO