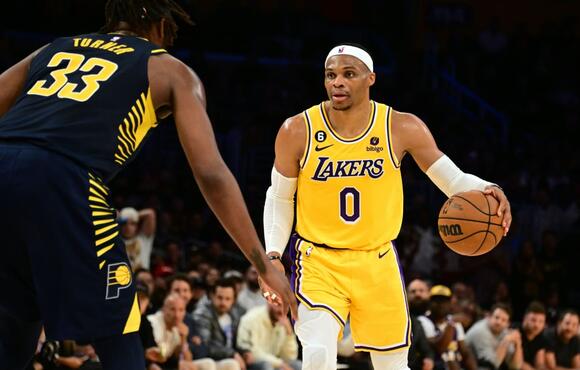 It's not rocket science.

Your Los Angeles Lakers put up a stinker last night, letting a 17-point fourth quarter lead over the Indiana Pacers evaporate thanks to some incredibly question shot selection late. Indiana would go on to win on an Andrew Nembhard buzzer beater, 116-115.

After the game, Russell Westbrook chatted with the gathered scrum of reporters, and noted that he botched some of his looks. He actually shot a pretty-good 3-of-6 from the field during the final quarter for eight points, but his clunkers were costly.

That's not exactly what the problem was, Russ.

Yes, you missed some shots. But the bigger-picture issue is how you missed those shots. You held onto the ball too long without running any concrete play actions to get the rock into the hands of a red-hot Anthony Davis, instead forcing up hard shots late in the shot clock that were practically destined to miss.

It's the same kind of behavior that convinced head coach Darvin Ham to move Westbrook to the bench -- and, at least for long stretches, away from LeBron James (who, to be fair, settled for awkward jumpers in the fourth too much, as well)-- at the beginning of the season. Westbrook is almost a liability in late game situations, with or without the ball in his hands. He does too much when he is running the show, but he gives you very little in terms of shooting and frequently stands around when he's off-ball.

The 6'3" veteran point guard did score 24 points on 10-of-18 shooting overall from the floor in just 27:19. He also chipped in six dimes and four rebounds. He also, critically, failed to help close out on that Nembhard dagger.

So it wasn't just late-game offense that was the issue for Westbrook. His late-game defense was a problem, too. If he can't play more in-control late, maybe he shouldn't play late.

only the people that let the media wash their brains believe this nonsense lebrons lack of defense is the biggest problem this team has.

This would drastically shift the landscape of the NBA.
LOS ANGELES, CA・5 HOURS AGO
AllLakers

This would be something else.
LOS ANGELES, CA・2 DAYS AGO
AllLakers

One of sports' biggest villains continues trying to tear down one of its biggest heroes.
LOS ANGELES, CA・21 HOURS AGO
AllLakers

Here are three options for the Lakers before the trade deadline.
LOS ANGELES, CA・1 DAY AGO
All Seahawks

I’ll never enjoy covering these stories but whenever someone sadly passes away we need to make sure it’s covered. If you’re a fan of USC or the Los Angeles Rams this persons death might hurt you more than on average. Former Cleveland Browns first round pick, Charles,...
LOS ANGELES, CA・2 DAYS AGO
AllLakers

While playing one season in Los Angeles, the forward averaged 7 points and 2.3 rebounds.
LOS ANGELES, CA・2 DAYS AGO
AllLakers

With Irving off the table, LA must pursue other options for improvement.
LOS ANGELES, CA・2 DAYS AGO
AllLakers

The Clippers head coach has a unique perspective on the two LA legends.
LOS ANGELES, CA・2 DAYS AGO
AllLakers

Lakers guard loves the trade made by the Dallas Mavericks
LOS ANGELES, CA・2 DAYS AGO
AllLakers

It's time to move off Brodie.
LOS ANGELES, CA・7 HOURS AGO
AllLakers

Trouble in paradise as the deadline looms.
LOS ANGELES, CA・8 HOURS AGO
AllLakers

Lakers News: Former LA Point Guard May Be Available Ahead of Trade Deadline

He would be an upgrade, but would the juice be worth the squeeze?
LOS ANGELES, CA・2 DAYS AGO
AllLakers

It happened! After first being rumored earlier today, Shams Charania of The Athletic reports that your Los Angeles Lakers are now finalizing a three-team trade that will ship out non-Sixth Man of the Year Russell Westbrook's bloated expiring $47.1 million contract and one future first round draft ...
LOS ANGELES, CA・1 HOUR AGO
AllLakers

How much interest, per se?
LOS ANGELES, CA・1 DAY AGO
OnlyHomers

Teammates and coaches are mourning the loss of a former collegiate tennis star who died suddenly at the age of 31 over the weekend. Former University of Georgia standout Lilly Kimbell reportedly died on Sunday, according to her family. Kimbell's family says that she had been experiencing kidney issues that led to a heart attack. CPR was performed at her home and she was transported to the hospital, but her family tragically were forced to make the decision to take her off of life support.
ATHENS, GA・8 HOURS AGO
AllLakers

Was he hurt? Or just tuned out?
LOS ANGELES, CA・9 HOURS AGO