‘Oh, my goodness, are we winning!’: Philly district attorney offers theory for his impeachment 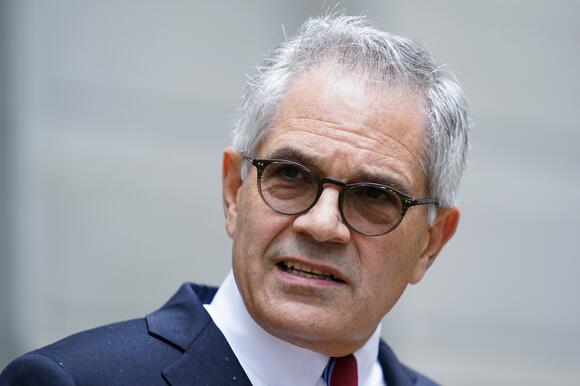 Reform prosecutors and progressive prosecutors continue to win elections across the United States, despite Republicans' attempts to focus on crime. Because these types of candidates are winning elections, the GOP has "figured it out" and is now focusing on winning "in between elections," which include impeachments and recalls of prosecutors from their offices, he told the Intercept .

"It's not to say we are winning every single one," Krasner said. "But oh, my goodness, are we winning! And that is not the public perception."

WATCH: PHILLY MAN CREDITS INHALER IN POCKET FOR SAVING HIS LIFE FROM BULLET

Krasner added that he believes reform policies are not only the right thing to do but are also a big draw for voters that the Democratic Party should focus on. If the party does, it would receive the support of voters from many different backgrounds and generate goodwill with these voters.

The district attorney also made note of a possible correlation between rising crime rates that Republicans have focused on and a rise in gun purchases, saying one could "almost mark" the correlation while stopping short of drawing a direct connection. Krasner also noted how there have been 31 fewer homicides on this date than on the same date last year, adding that it is "pretty obvious" the massive increase in gun purchases has gone down lately in the last two years.

Krasner was impeached by Pennsylvania's GOP-controlled House on Nov. 16 in a vote of 107-85 over allegations that his policies led to a spike in the city's violent crime. Pennsylvania House Majority Leader Kerry Benninghoff claimed that under Krasner, there have been almost 1,000 homicides in Philadelphia in the last 22 months, as well as "over 1,000 carjackings since the beginning of the year," according to the Philadelphia Tribune .

The impeachment process has been moved to the Pennsylvania Senate, which will vote on Krasner's impeachment on Tuesday.

Krasner is 100% responsible for the outta control crime in the city. even further, the voters are responsible for the increased crime. they all knew what Krasner was all about and yet they still voted him in for a second term. the voters are more loyal to the democrat party than actually doing what was right to help keep the people of Philadelphia safe. and that was to vote against Krasner.

He's a hero in his own mind. Philly will be a lot better off after we get a qualified tuff on crime DA. Nobody in my family has ever been a police officer but am very concerned about them being understaffed, morale could not be any lower and none of the 3 stoogies have their back. Good old lying soda tax boy Kenny only gave the PPD around $11,000 to advertise for much needed recruits when the PPD only asked for around $112,000.

President Joe Biden and Vice President Kamala Harris are delivering speeches at a winter meeting of the Democratic National Committee in Philadelphia on Friday.
PHILADELPHIA, PA・2 DAYS AGO
WashingtonExaminer

President Joe Biden struck a decidedly less defiant tone Friday about his tenure, saying he's made mistakes in office and will do so again.
PHILADELPHIA, PA・2 DAYS AGO
WashingtonExaminer

Philadelphia Eagles quarterback Jalen Hurts reflected on his team’s NFC Championship win, noting that he has had to hold on to his faith amid many doubters early on in his NFL career.
PHILADELPHIA, PA・1 DAY AGO