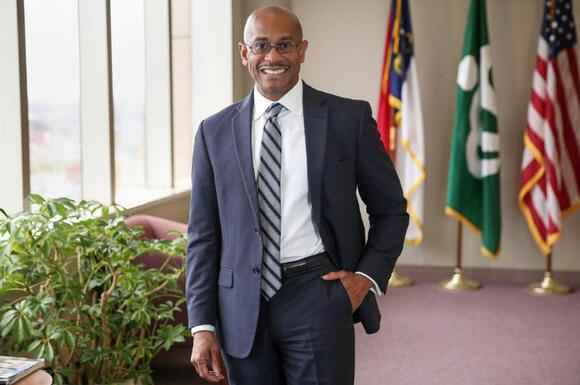 CHARLOTTE — Charlotte’s city manager now makes more than the president of the United States does.

Councilmember Lawana Slack-Mayfield was one of the four no votes. She says she thinks Jones is a great city manager, but it is a challenge to sign off on this significant pay raise.

“Yes he does a great job, but a city our size, this is truly a level of not really hearing what is going on in our community,” Slack-Mayfield said.

Charlotte City Council did not conduct a performance review of Jones last year, so this factors in raises for both years.

wtf. have you been in Charlotte lately. it is bad. but look at who he is . the hole city is a sad blue.

CHARLOTTE — U.S. Senator Thom Tillis of North Carolina announced Friday he has helped secure a $4.4 million grant from the U.S. Department of Transportation to reduce traffic crashes through infrastructure improvements in the Charlotte-area. The grant will help implement systemic Vision Zero strategies and will focus on intersections...
CHARLOTTE, NC・9 HOURS AGO
WSOC Charlotte

GASTONIA, N.C. — The City of Gastonia has a new police chief. The town announced Friday that Interim Police Chief Trent Conard is now the permanent Chief of the Gastonia Police Department. Conard is taking over for Travis Brittain, who announced his retirement in September. Conrad joined the GPD...
GASTONIA, NC・1 DAY AGO
WSOC Charlotte

CHARLOTTE — Memphis authorities released video footage Friday showing Tyre Nichols being beaten by police officers who held the Black motorist down and repeatedly struck him with their fists, boots and batons as he screamed for his mother. Activists are now using the Memphis case as a rallying cry...
CHARLOTTE, NC・1 DAY AGO
WSOC Charlotte

CHARLOTTE — The Charlotte-Mecklenburg Police Department is investigating a homicide in southwest Charlotte. On Sunday, police received reports about a body being found near the 1300 block of Choyce Avenue. At the scene, a victim was found deceased from a gunshot wound. The investigation into this case is active...
CHARLOTTE, NC・1 HOUR AGO
WSOC Charlotte

WASHINGTON — A Cleveland County man who was accused of claiming to have a bomb in a pickup truck near the U.S. Capitol in August 2021 has pleaded guilty to one charge of threats to use explosives, according to Channel 9′s partners at 7News in Washington. Floyd Ray...
GROVER, NC・1 DAY AGO
WSOC Charlotte

ROCK HILL, S.C. — A non-profit in York County held its biggest event to date in honor of a fallen sheriff detective who was killed in the line of duty. Mike Doty was killed during an ambush in 2018. Three other officers were hurt. The shooting inspired Hungry Heroes, who works to fee first responders each year.
ROCK HILL, SC・7 HOURS AGO
WSOC Charlotte

HICKORY, N.C. — A longtime Hickory Police Department Deputy Chief is moving up and taking over as Chief of Police. In a release, the department announced that after 25 years of service, Major Reed Baer will take over as chief on Wednesday, following the retirement announcement of standing Police Chief Thurman Whisnant.
HICKORY, NC・3 HOURS AGO
WSOC Charlotte

KANNAPOLIS, N.C. — A Kannapolis family has a new place to call home. Yesenia Rios left New York with her two young children five years ago in the hopes of getting a fresh start in the Carolinas. The mother ran into unexpected challenges after arriving in Kannapolis and found...
KANNAPOLIS, NC・2 DAYS AGO
WSOC Charlotte

RICHBURG, S.C. — The Chester County School District will hold a job fair Saturday morning. The fair will be held at The Gateway Conference Center in Richburg from 9 a.m. to 12 p.m. The no-cost event will be open to the public. As school districts face staffing shortages across...
CHESTER COUNTY, SC・1 DAY AGO
WSOC Charlotte

Shelby man sentenced to more than 17 years for drug trafficking

CHARLOTTE — A Shelby man was sentenced to more than 17 years behind bars for drug trafficking, according to a release from the U.S. Attorney for the Western District of North Carolina. On Jan. 25, U.S. District Judge Frank D. Whitney sentenced 45-year-old Chadwick Javon Strong, known as “Izeem...
SHELBY, NC・23 HOURS AGO
WSOC Charlotte

CHARLOTTE — Capriotti’s Sandwich Shop is doubling down on the Charlotte market. Franchisees David Froman and Todd Guear will open a 1,400-square-foot restaurant on Saturday at the Shoppes of Madison Place. That center is at 2040 Freeman Park Drive in southwest Charlotte. This marks the second location for...
CHARLOTTE, NC・5 HOURS AGO
WSOC Charlotte

CHARLOTTE — Restaurant Constance is the fulfillment of a dream for chef Sam Diminich. That west Charlotte establishment — named for his eldest daughter— opens for dinner service today. The roughly 1,000-square-foot restaurant is at 2200 Thrift Road, in the Wesley Heights neighborhood. It marks the next...
CHARLOTTE, NC・1 HOUR AGO
WSOC Charlotte

FORT MILL, S.C. — A quick trip to the QuikTrip near Carowinds in Fort Mill ended up being worth big money for a lottery winner last November, the South Carolina Education Lottery announced Thursday. The winner bought a $10 scratch-off ticket called “The Million,” and she took home the...
FORT MILL, SC・2 DAYS AGO
WSOC Charlotte

CHARLOTTE — Krispy Kreme doughnuts are rising from the ashes and will be hot soon on Ponce de Leon Avenue in Atlanta. Charlotte-based Krispy Kreme Inc. announced that it began construction on a new shop set to replace its historic Midtown location, which caught fire twice in 2021. Krispy Kreme demolished the burned-out store and operated a temporary drive-thru shop at the site later that year.
CHARLOTTE, NC・1 DAY AGO
WSOC Charlotte

CHARLOTTE — The Charlotte-Mecklenburg Police Department is searching for a 70-year-old man who has been reported missing. John Vincent Corrigan was last seen around 9 a.m. leaving his home on the 7000 block of Ambleside Drive. Police said Corrigan was traveling to an appointment on the 1500 block of...
CHARLOTTE, NC・20 HOURS AGO
WSOC Charlotte

LANCASTER, S.C. — A teacher with Indian Land High School is facing felony drug charges and has been placed on paid leave after the Lancaster County Sheriff’s Office says investigators found a big stash of drugs and guns inside a home in Lancaster. Lancaster County detectives say they...
LANCASTER COUNTY, SC・2 DAYS AGO
WSOC Charlotte

ROCK HILL, S.C. — The Rock Hill Police Department arrested Ragienal Roseboro, of Rock Hill, on Sunday after a shooting inside a home. Police say they were dispatched to a house along Harrison Street in Rock Hill around 4:17 a.m. to help paramedics who received a call about a shooting victim.
ROCK HILL, SC・3 HOURS AGO