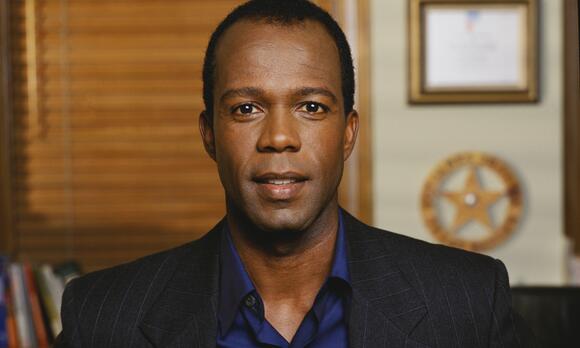 Gilyard’s film, television, and theater career spanned more than 30 years, including classics such as Top Gun (1986), Die Hard , Matlock , and Walker, Texas Ranger . As such, his fanbase is innumerable, comprised of everyone from action movie fanatics to Broadway buffs. An outpouring of grief from fans all over the world followed the news of his death.

“I met him at Comic Con London in June 2022. What a lovely, kind-hearted man he was. I had a photoshoot with him and got his autograph. RIP you will be missed by everyone, even by people who only met you briefly,” one fan wrote on Twitter.

“One of my favorites! I enjoyed his performances in Matlock and Die Hard very much. Prayers of comfort for his family, friends, and students,” another said.

As many fans agree, the annual viewing of the Christmas classic Die Hard will be tinged with sadness this year. “Way too young. Watching Die Hard this holiday season will carry extra poignancy. RIP,” one fan said.

The film most prominently featured Bruce Willis and Reginald VelJohnson. Clarence Gilyard Jr’s performance, however, is a favorite among action fans. Gilyard’s line “The quarterback is toast!” has always stood as one of the most quotable in a film packed with meme-worthy moments.

After decades behind the camera, Clarence Gilyard Jr. decided to take his passion for filmmaking to the classroom. In 2006, the Die Hard star dedicated his life to molding aspiring actors as a film and theater professor at the University of Nevada, Las Vegas’ College of Fine Arts.

In his more than 15 years at the professor’s podium, Clarence Gilyard Jr. proved that he not only had an undeniable talent for acting but for teaching as well. On Monday, UNLV Dean Nancy J. Uscher shared a touching tribute to one of her most adored professors.

“His students were deeply inspired by him, as were all who knew him,” she told the Las Vegas Review-Journal . “He had many extraordinary talents and was extremely well-known in the university through his dedication to teaching and his professional accomplishments.”

“[Clarence Gilyard Jr.’s] generosity of spirit was boundless,” Uscher continued. “He was always ready to contribute to projects and performances however possible. We remember Clarence with joy and gratitude for all he contributed to the College of Fine Arts, the UNLV community, and, through his impressive personal achievements, to the world.”

Tony Romo Speaks Out About Criticisms of His Broadcasting Style

It’s been a few years since Tony Romo was the quarterback of the Dallas Cowboys, but his critics are still... The post Tony Romo Speaks Out About Criticisms of His Broadcasting Style appeared first on Outsider.
NEW YORK STATE・1 DAY AGO
Outsider.com

Now that Tom Brady is officially out of the game, NFL attention turns to Aaron Rodgers. What will he do? Well, he’s currently treasing about playing for a former coach. That’s why the New York Jets offer such a soft and lucrative landing spot for the 39-year-old Rodgers. The Jets have hired Nathaniel Hackett, the former Denver Broncos head coach, to be the team’s offensive coordinator. And Hackett worked the same job with the Packers from 2019-21.
GREEN BAY, WI・2 DAYS AGO
Outsider.com

‘Frasier’ Is Heading Back to Boston, and the ‘Cheers’ Cameo Potential Is Off the Charts

It looks like Kelsey Grammer is taking his Frasier character back to where things all started for him in Boston. We picked up a notice from the show’s production team on Twitter. In the photo, we get a view of a plane ticket. It clearly shows that Frasier is going home…with the Cheers cameo possibilities endless.
BOSTON, MA・1 DAY AGO
Distractify

“King of Pop” Michael Jackson’s family has been all over the news lately. The late pop star’s ex-wife Lisa Marie Presley passed away on Jan. 12. His daughter, Paris Jackson, attended the Los Angeles premiere of the documentary Pamela, a love story on Monday, Jan. 30. And that same day, Michael’s son Prince Jackson congratulated cousin Jaafar Jackson on his role as the “Thriller” singer in the upcoming biopic Michael. But what about Michael’s other son? Where is Blanket Jackson now?
LOS ANGELES, CA・3 DAYS AGO
CBS Detroit

Video surfaces of Armani Kelly days before he, 2 other rappers disappeared after canceled Detroit show

(CBS DETROIT) - It has been 12 days since anyone has seen Armani Kelly, Montoya Givens and Dante Wicker. Now, a Facebook live video conversation has surfaced where Kelly is seen talking with three men about coming to Detroit only two days before he went missing."I think it has to do with that video," said Lorrie Kemp, Kelly's mother. Kemp said, at one point, the men can be seen arguing about something Kelly said recently online. In that video, Kelly mentioned he was going to pick up "Jugg" before heading to Detroit to meet up with the masked men in the video. "You...
DETROIT, MI・1 DAY AGO
Outsider.com

The Denver Broncos head coach search is over. Denver agreed on a deal with the New Orleans Saints that will make Sean Payton the Bronco’s next head coach. Payton coached the Saints from 2006 to 2022, and after just one season away from the game returns to head coach again in Mile High. With Payton under contract with the Saints, the Broncos traded a first-round draft pick in this year’s draft and a second-round pick in next year’s for the rights to hire Payton along with a 2024 third-round pick.
DENVER, CO・2 DAYS AGO
Outsider.com

Jeopardy! fans can be some of the most fickle when watching the show and they have problems with Jake DeArruda. He’s the current champ on the show. There are some fans who are calling DeArruda “unwatchable.” Ouch, that smarts! But DeArruda, who comes from Ludlow, Vermont, is on a roll. After beating Troy Meyer last week, DeArruda has won three straight games as of Tuesday, January 31.
VERMONT STATE・1 DAY AGO
Outsider.com

Former North Carolina star Jason Capel didn’t get the warmest welcome in his return to Chapel Hill on Wednesday night. The Pitt assistant coach, and brother of head coach, Jeff Capel, was pretty peeved about it, too. Jason reportedly started yelling outside the Panthers’ locker room following the game...
CHAPEL HILL, NC・1 DAY AGO
Outsider.com

Another NFL season is almost over, which meant another soul-crushing playoff exit for America’s Team. After last year’s debacle where Dak Prescott ran out the clock on a QB scramble at home against the 49ers, the two teams met up again in the postseason, this time in San Fran. More hijinks ensued as Prescott threw a pair of interceptions, then only got the ball six yards downfield on the final desperation play. Niners win, Cowboys lose, and once again, in embarrassing fashion.
DALLAS, TX・1 DAY AGO
Outsider.com

Tom Brady announced his retirement Wednesday after 23 seasons in the NFL. Brady spent the first two decades of his Hall of Fame career with the New England Patriots, where he won six of his seven Super Bowl championships. Team owner Robert Kraft and head coach Bill Belichick, who selected Brady in the sixth round of the 2000 NFL Draft, issued statements on his retirement.
1 DAY AGO
Outsider.com

Recently, Yellowstone‘s Teeter actress Jen Landon made a life-changing decision about her living situation. And, looking back, she credits the decision to her Yellowstone costar Ryan Bingham. Speaking with Truck Camper Magazine, Jen Landon said that years of “itchy feet” led her to purchase a Capri Camper. The unit...
TEXAS STATE・1 DAY AGO
Outsider.com

This is one that NASCAR fans have been waiting to see. Kyle Busch and Richard Childress Racing finally dropped the 3CHI scheme. We knew that this was coming, but it’s great to finally see it. And, let’s be honest, it’s an improvement over Tyler Reddick’s 2022 design.
1 DAY AGO
Outsider.com

Donovan Mitchell and Dillon Brooks were both ejected from Thursday’s game between the Cleveland Cavaliers and Memphis Grizzlies following a scrap stemming from Brooks hitting Mitchell below the belt. Brooks hit the deck after a contested layup attempt. Mitchell hauled in the rebound and when Brooks turned over, hit...
MEMPHIS, TN・16 HOURS AGO
Outsider.com

Fans of the NFL and beer are getting a sneak peek at Budweiser’s Super Bowl LVII advertisement. The commercial has... The post Budweiser Unveils 2023 Super Bowl Commercial Featuring Return of Iconic Tagline appeared first on Outsider.
2 DAYS AGO
Outsider.com

On this gloomy Groundhog Day in Canada, the sad news of Fred la Marmotte’s passing arrived hours before he could perform his annual ritual. The revered rodent was dearly loved by all and will be profoundly missed. Thursday morning was filled with joy and music at Val-d’Espoir, Quebec’s Groundhog...
18 HOURS AGO
Outsider.com

Over the weekend, Yellowstone star Cole Hauser took a break from the chill of Montana’s mountains to head to Disney World with his family. In a new photo from Disney’s Animal Kingdom, however, the 47-year-old actor looks nothing like his beloved character Rip Wheeler, and it’s left fans of the series totally shocked.
MONTANA STATE・2 DAYS AGO
Outsider.com

Hunter Shoots Deer He Wasn’t Supposed to, Gets Caught Red-Handed on Camera

Pennsylvania police are on the hunt for an alleged poacher who trespassed on a family farm, shot a deer, and stole a trail cam. It was Saturday night and a group of families was enjoying their evening at the Ashford House Farm in Conshohocken, Pennsylvania. Unbeknownst to everyone in the warm farmhouse, there was a strange man walking through a wooded section of the property with the goal of shooting a deer.
CONSHOHOCKEN, PA・2 DAYS AGO
Outsider.com

Just when you thought the controversies from the AFC Championship Game would go away, Gene Steratore stirs up trouble. The... The post Former NFL Head Referee Says Refs Missed Penalty on Key Play in Chiefs vs. Bengals appeared first on Outsider.
CINCINNATI, OH・2 DAYS AGO
Outsider.com

Dan Aykroyd, ‘Cheers’ Star George Wendt Teaming Up for ‘A History of the World in Six Glasses’ Docuseries

Saturday Night Live star Dan Aykroyd will be joined by some other funny guys for a new docuseries from Fox Nation. Aykroyd, along with Cheers star George Wendt and other SNL‘ers Jim Belushi, Kevin Nealon, and Jon Lovitz. will have parts in A History of the World in Six Glasses. The humorous docuseries will air on Fox Nation.
21 HOURS AGO