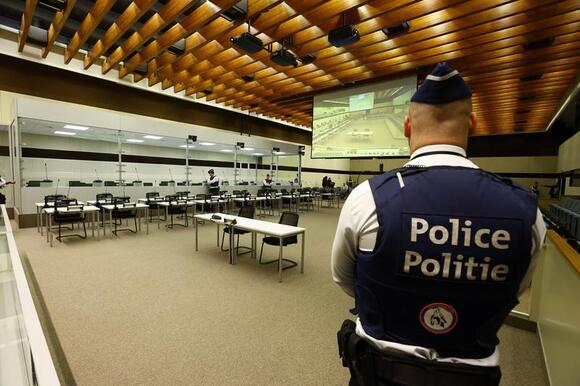 BRUSSELS (Reuters) - Belgium launches its largest ever trial on Wednesday to determine whether 10 accused men played a part in the 2016 Islamist bombings of Brussels airport and the city’s metro that killed 32 people and injured more than 300.

Among the 10 accused are six men already convicted in France over the November 2015 Paris attacks, but unlike the French trial which concluded in June with a decision by a panel of judges, the Brussels case will be settled by a jury.

Presiding Judge Laurence Massart will oversee the selection of a 12-person panel, chosen from 1,000 Belgian citizens summoned to attend a mammoth selection process on Wednesday.

Proceedings will commence on Monday in the former headquarters of NATO in a Brussels suburb.

The trial, set to last until the end of June, will undoubtedly revive painful memories for the roughly 1,000 victims registered to attend. They include those who lost loved ones or were injured and witnesses to the twin bombings at the airport and third bomb on the metro on March 22, 2016.

Lawyers say many are seeking to understand why they or their loved ones became targets of an Islamist attack.

Certain relatives and victims are expected to address the court, along with a roster of some 370 experts and witnesses due to testify.

The defendants include Mohamed Abrini, who prosecutors say went to Brussels Airport in March 2016 with two suicide bombers, but fled without detonating his suitcase of explosives, and Osama Krayem, a Swedish national accused of planning to be a second bomber on Brussels’ metro.

Salah Abdeslam, the main suspect in the French trial who was seized four days before the Brussels attacks, is also among the accused, along with others prosecutors say hosted or helped certain attackers. One of the 10, presumed killed in Syria, will be tried in absentia.

The trial, estimated including building conversion to cost 20-25 million euros ($20.74-$25.92 million) was to have started in October, but was delayed after the judge ordered reworking of the glass boxes for the defendants that their lawyers likened to animal cages.

KYIV/BRUSSELS, Feb 9 (Reuters) - Ukrainian President Volodymyr Zelenskiy prepared to lobby European leaders on Thursday at a summit in Brussels for more weapons in the fight against Russia and a quick start to EU membership talks for his country.
WASHINGTON STATE・7 HOURS AGO
Reuters

U.S. cautions citizens in Sweden over possible attacks in retaliation for Koran burning

WASHINGTON/STOCKHOLM, Feb 6 (Reuters) - The U.S. embassy in Sweden has warned Americans in the country of possible retaliatory attacks in response to an incident where a far-right politician burned the Koran.
2 DAYS AGO
Reuters

PARIS, Feb 8 (Reuters) - France and Germany have the opportunity to be "game changers" in the war against Russia by not hesitating in delivering heavy weapons and modern fighter jets to Ukraine, President Volodymyr Zelenskiy said during a visit to Paris on Wednesday.
7 HOURS AGO
Reuters

AZAZ, Syria, Feb 6 (Reuters) - Syrian toddler Raghad Ismail was rushed to safety from the rubble of her home after it collapsed in a huge earthquake that has wreaked devastation in Syria and Turkey. But most of her family, including her mother, did not make it out alive.
2 DAYS AGO
Business Insider

KYIV, Feb 8 (Reuters) - Ukraine will use all international legal mechanisms to try to bring Russian President Vladimir Putin to justice for the shooting down of Malaysia Airlines Flight 17 over east Ukraine in 2014, Prosecutor General Andriy Kostin said on Wednesday.
15 HOURS AGO
Reuters

WARSAW, Feb 8 (Reuters) - Western partners could deliver the first battalion of Leopard 2 battle tanks to Ukraine in the first three or four months of this year, German Defence Minister Boris Pistorius said on Wednesday on a trip to the Polish capital.
13 HOURS AGO
Reuters

Putin approved supply of missiles that shot down MH17 in 2014, investigators say

AMSTERDAM, Feb 8 (Reuters) - The international team investigating the 2014 downing of Malaysia Airlines Flight 17 (MH17) by a missile has convincing evidence that Russian President Vladimir Putin personally signed off on a decision to allow the Russian missile system into Ukraine, Dutch prosecutors said on Wednesday.
17 HOURS AGO
Reuters

WASHINGTON, Feb 8 (Reuters) - U.S Secretary of State Antony Blinken said on Wednesday the United States has shared information it has obtained about China's spy balloon with dozens of countries around the world.
WASHINGTON STATE・9 HOURS AGO
Reuters

VILNIUS, Feb 8 (Reuters) - Estonia's Foreign Intelligence Service said it believed Russia still had the strength to exert "credible military pressure" on the Baltic region, where the security risk has risen for the medium and long-term.
18 HOURS AGO
Reuters

Without giving evidence, Russia says it probes Ukraine use of chemical weapons

Feb 6 (Reuters) - Russia's state Investigative Committee said on Monday it was examining the alleged use of chemical weapons by Ukrainian forces near the eastern Ukrainian towns of Soledar and Bakhmut.
2 DAYS AGO
Reuters

ISKENDERUN, Turkey, Feb 7 (Reuters) - Rescue teams and survivors peered through the twisted remains of an Iskenderun hospital on Tuesday, searching for signs of life a day after a major earthquake struck Turkey and neighbouring Syria.
1 DAY AGO
Reuters

Feb 6 (Reuters) - The founder of Russia's Wagner mercenary group Yevgeny Prigozhin on Monday published a video of himself in the cockpit of a military aircraft, challenging Ukrainian President Volodymyr Zelenskiy to an aerial duel.
WASHINGTON STATE・2 DAYS AGO
Reuters

Feb 7 (Reuters) - The construction of protective structures for key facilities at the Zaporizhzhia nuclear plant in southeast Ukraine is nearing completion, Russia's state TASS news agency reported on Tuesday, citing an adviser to the head of Russia's nuclear plants operator.
2 DAYS AGO
Reuters

KYIV, Feb 6 (Reuters) - Ukraine sowed confusion on Monday about whether its defence minister would be replaced, creating doubts about the leadership of its war effort just as it braces for an expected Russian offensive.
2 DAYS AGO
Reuters

Feb 7 (Reuters) - Russia's defence minister said on Tuesday that Western arms supplies to Ukraine were effectively dragging NATO into the conflict, warning this could lead to an "unpredictable" escalation.
1 DAY AGO
Reuters

ZURICH, Feb 6 (Reuters) - Switzerland is close to breaking with centuries of tradition as a neutral state, as a pro-Ukraine shift in the public and political mood puts pressure on the government to end a ban on exports of Swiss weapons to war zones.
2 DAYS AGO
Reuters

WASHINGTON, Feb 8 (Reuters) - The U.S. Treasury Department imposed sanctions on Wednesday on two members of the international criminal gang MS-13, accusing them of involvement in drug trafficking and murder in Central America and the United States.
WASHINGTON STATE・14 HOURS AGO