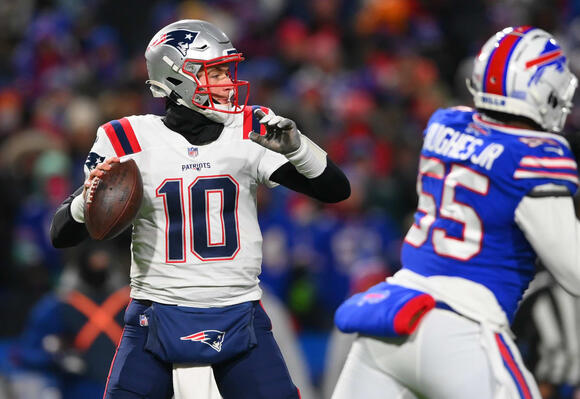 FOXBORO — As New England Patriots quarterback Mac Jones stepped off the Highmark Stadium field after his team’s 47-17 playoff loss to the Buffalo Bills on Jan. 15, he was already anticipating the chance to cleanse the bitter taste of defeat from his proverbial palate.

As the Pats prepare to host the Bills on Thursday night at Gillette Stadium, Jones will finally get that opportunity. Of course, the 24-year-old is well aware of the challenges which Buffalo’s 2022 iteration is capable of presenting.

“They’re playing as well as anybody in the NFL right now,” Jones told reporters on Sunday. “[The Bills have] a really good defense. Great players at every level, really well coached, attack the football, they rally to the ball, all the things that they've done for a long time. It's a great defense and a big challenge."

Albeit in defeat, Jones enters Week 13 fresh off of his best performance of the season. In the Pats 33-26 loss to the Minnesota Vikings on Thanksgiving night, Jones looked more decisive, confident and aggressive, clearly taking advantage of a strong performance from the team’s offensive line .

While the Alabama product is hoping to build upon a promising showing, his history against the Bills has been largely underwhelming.

Ironically, Jones’ first faced the Bills in Week 13 of 2021. Facing 40 mph wind gusts in the cold air of Orchard Park, New York, the Pats employed a run-dominant game plan, which saw him complete only 2 of 3 passes for 19 yards in a 14-10 Patriots victory.

Jones next got a crack at Buffalo in Week 16 at Gillette Stadium. He struggled for much of the day completing just 14 of 32 for 145 yards and two interceptions. The then-Pats’ rookie looked overwhelmed at times and was unable to overcome an early deficit. Overall, Jones struggled with his accuracy, as well as adapting to pressure. The Bills won the contest 33-21.

In their lone playoff meeting, Jones finished the game completing 24 of 38 passes for 232 yards with two touchdowns and two interceptions. While questionable coaching strategy, poor execution and self-inflicted miscues will be among the reasons for the Pats’ Wild Card Weekend debacle, Jones performed relatively well. Though he was far from perfect, he played with passion and purpose, especially early in the game. He made athletic plays to convert two third-and-longs on their opening drive. He impressively evaded pressure, with both his legs as well as his eyes, to find tight end Hunter Henry for 33 yards on third-and-14. Shortly thereafter, Jones used his wheels to pick up 16 yards on a key third-and-ten to earn the first down. It was his connection with wideout Kendrick Bourne which allowed New England to add a pair of touchdowns to an otherwise lopsided affair.

Still, there is only so much that can be gleaned from last year’s meetings. Players, coaching strategies and circumstances have changed from year to year. Jones realizes that he must focus on the current crop of Bills to be successful on Thursday night.

“Last year is last year, but at the same time, we know what happened and we’ve got to come in here and work and kind of work through it all and go out there and compete,” Jones said. “They provide that challenge better than anybody we’ve played so far, so ‘hat’s off’ to them. They’ve done a great job, so we’ve got to be ready to go.”

While it is a new year, Buffalo’s defense continues to be among the NFL’s most stifling units. The Bills are tied for 12th in total yards allowed per game and rank fourth in pass defense. In fact, the team’s pass rush has been even more fearsome in 2022 thanks to the addition of linebacker Von Miller. The 33-year-old has been Buffalo’s premier pass rusher this season, having compiled eight sacks, 21 tackles (10 for loss), two passes-defensed and one forced fumble in 11 games.

However, New England is catching somewhat of a break, as Miller has already been ruled out for this week’s game with a lateral meniscus tear. With Miller out of the lineup, Jones may find it easier to keep himself out of pressure situations. Jones, however, knows that Buffalo’s pass rush is still capable of rising to the challenge, even without Miller.

Though Buffalo’s safeties and corners have not been overly active in the pass rush, it is likely that defensive coordinator Leslie Frazier will attempt to dial-up some strategically placed blitzes from the second and third level of the defense in hopes of confusing Jones. When under pressure, he is typically less accurate. However, Buffalo would be smart to also utilize their perimeter corners to take away his preferred routes and targets. Despite continuing to make his way back from offseason surgery to repair a torn ACL, cornerback Tre’Davious White is still among the best in the league at doing so. Jones will be getting his first look at the former All-Pro corner, who missed all three of last season’s meetings between the two teams.

“He’s a great player,” Jones said of White. “He’s been a great player for a long time. Just does a great job, transition and all that stuff, ball skills, everything.”

Whether Buffalo is reliably stout or atypically creative, Jones must be ready to lead his team abasing arguably their toughest test to date. Though previous losses occasionally serve as extra motivation, the Pats captain is ready to lead his current team into a complete team effort.

“We’ve got to play together as a team.” Jones said when asked about matching Buffalo’s prowess. “Once we do that, I think the results will be good.”

The Patriots and Bills are set for an 8:15 p.m. kickoff on Thursday, Dec. 1 from Gillette Stadium.

Lynn Bowden becomes the 15th player signed to a futures deal by the Patriots prior to the start of the 2023 league year on March 15.
2 DAYS AGO
Patriot Country

Which prospects stood out in front of Bill Belichick and the rest of the New England Patriots coaching staff at the East-West Shrine Bowl?
TENNESSEE STATE・1 HOUR AGO
Patriot Country

New England Patriots coach Bill Belichick had several conversations with one player during Day 3 of practice at the East-West Shrine Bowl. Plus, risers, fallers and additional notes and quotes from Las Vegas.
LAS VEGAS, NV・2 DAYS AGO
Patriot Country

The Patriots are expected to be among the NFL's best-situated teams when it comes to financial flexibility and draft capital.
1 DAY AGO