'It's Not Over!' Bills at Patriots: Climb Into AFC Playoff Picture? 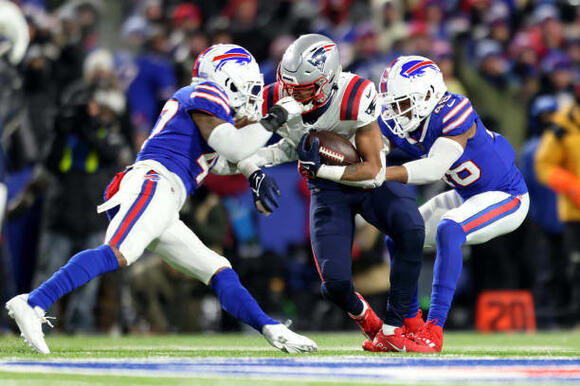 The New England Patriots need to string together some wins if they want to make the playoffs and could use some help in Week 13 to climb back into the AFC playoff chase.

FOXBORO — Things in the NFL sure do change quickly.

Just last week, the New England Patriots pulled off a miracle victory over the New York Jets, causing New York to slide down the conference standings.

At the time, the Jets dropped all the way to eighth place in the AFC and the Patriots were the sixth seed.

Then Thanksgiving came and the Patriots lost in a primetime Thursday night game vs. Minnesota, putting their record at 6-5.

But circumstances can't get any worse, right?

Well, only the top seven teams in the conference make the postseason. That means if the season ended today, the Pats would be on the outside looking in.

"We just need to find a way to win," Rhamondre Stevenson said.

Still, New England had the chance to maintain positioning on Sunday if some of the other teams in the wild-card mix took some losses. But unfortunately for New England, luck was not on their side.

The AFC East standings through Week 12 are not exactly like everyone predicted before the season . For starters, the Miami Dolphins are in first place, improving to 8-3 with a win over the mediocre Houston Texans. Miami Leap-frogging the Buffalo Bills in the division drops Buffalo down into the wild card.

Behind Buffalo in the standings is Cincinnati. Although the Bengals had a much tougher opponent lined up for Sunday in Tennessee, the Bengals escaped with a win 20-16 win over the Titans to improve to 7-4 on the year.

The Jets also had a successful Sunday, bouncing back from their loss to New England by benching Zach Wilson, starting Mike White at quarterback, and rolling to a 31-10 victory over the Bears. The win improved the Jets to 7-4 on the season, and ahead of New England in the standings.

With a last-minute touchdown and a bold two-point conversion, the Los Angeles Chargers beat the Arizona Cardinals by one point on Sunday. In doing so, the Chargers improved to 6-5, matching the Patriots' record for the year.

"The season is not over," Devin McCourty said. "We got to regroup and play better than we played defensively Thursday night."

With playoff implications on the line, the Bengals host the Chiefs, the Dolphins visit the 49ers, and the Jets will visit the well-rested Vikings. The Chargers will also visit the Raiders, who now have won two straight and might be figuring a few things out. So some losses for the competition may be coming.

The Patriots, although currently in last place in the AFC East, will have an opportunity to gain some ground. New England will welcome the Bills to Gillette Stadium on Thursday, Dec. 1 for an 8:20 p.m. ET kickoff.

Two players from the New England Patriots will draw significant interest this offseason when they become free agents.
3 HOURS AGO
Patriot Country

Lynn Bowden becomes the 15th player signed to a futures deal by the Patriots prior to the start of the 2023 league year on March 15.
17 HOURS AGO
Patriot Country

New England Patriots coach Bill Belichick had several conversations with one player during Day 3 of practice at the East-West Shrine Bowl. Plus, risers, fallers and additional notes and quotes from Las Vegas.
LAS VEGAS, NV・4 HOURS AGO
Patriot Country

With Mac Jones and Bailey Zappe, New England isn't one of the 14 NFL teams with quarterback questions heading into the 2023 offseason.
22 HOURS AGO
Patriot Country

Patriots Past: Once Dominant on AFC Championship Sunday, Who Does New England Root For Now?