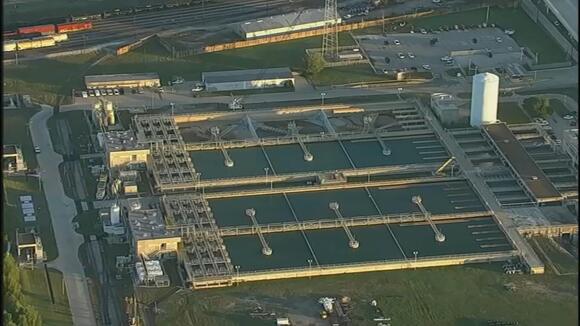 The boil water notice for the City of Houston has been lifted after testing determined the tap water is safe to drink. Houston Public Works made the announcement at 6:40 a.m. on Tuesday. Officials said customers no longer need to boil water before drinking, cooking, and making ice after water quality testing submitted to the Texas Commission on Environmental Quality confirmed that tap water meets all regulatory standards and is safe to drink. The city said Houstonians should flush their water system by running cold water faucets for at least one minute, cleaning automatic ice makers by making and discarding several batches of ice, and running water softeners through a regeneration cycle. Anyone with questions about water safety can contact 311 or (713) 837-0311. The City of Bellaire rescinded its boil water notice Monday night, saying Houston's water system didn't impact its water quality. Houston ISD and a number of other school districts canceled classes on Tuesday, for the second day in a row, due to the boil water notice. ABC13 asked city officials how this all happened in the first place. They say it's something they're still working to investigate and can hopefully prevent from happening again. Officials say it all started when three plants inside the East Water Purification Center lost power at 10:50 a.m. Sunday. SEE ALSO: Houston boil water order resulted from ground trips at power plants That triggered the water pressure to fall below the emergency standard of 20 PSI, where bacteria can grow more easily. Houston Mayor Sylvester Turner said city officials consulted with the state, but the boil water advisory was not issued until seven hours later, around 6:40 p.m. He said a transformer at the water center also failed, as well as the backup transformer. The city has a long-standing $56 million contract with NRG Energy Services for backup power generators. RELATED: 'Stuff happens': Houston leaders still searching for answers after water purification plant failure

CenterPoint Energy is assessing the East Purification Plant where a system and backup generation failure forced a Houston-wide boil notice.

NRG told 13 Investigates that the problem was with the two city-owned transformers. "I know some people have said on social media, 'What about the generators?' Well, we did have generators. But when the transformers failed to operate, it prevented the generators from being connected in order to provide the additional power," Turner explained. "Plus, there was still power in the grid. So it was the transformers in between the grid and the generators that prevented the power." Turner said the power was out for two hours. He said the water pressure dropped below the emergency standard for less than two minutes, but the boil water advisory was put in place out of an abundance of caution. The incubation period takes about 18 hours, so the order could only be lifted once the final official results came in. A spokesperson for the mayor's office contacted Eyewitness News through email. "It turns out that it was a Centerpoint Energy contractor, ESG Energy Systems Group, that evaluated over 230 critical infrastructure sites, which included all water and wastewater sites. ESG evaluation looked at grid power and backup generation. They did not perform any operational or maintenance evaluation. However, ESG informed the city that with double redundancy, this Tier 1 site is already well hardened." 13 Investigates requested nearly two years' worth of inspection reports for the East Water Purification Plant, including the transformers that failed. We also asked for emails and texts between the mayor and the city's office of emergency management to hopefully learn more about the conversations around when to notify the public. For more on this story, follow Pooja Lodhia on Facebook , Twitter and Instagram .

The big rig crash on the Katy Freeway was cleared after nearly five hours after having multiple mainlanes blocked.
HOUSTON, TX・4 HOURS AGO
ABC13 Houston

Clean-up efforts are underway in Deer Park after Tuesday's tornado ripped through many of the town's homes and businesses.
DEER PARK, TX・5 HOURS AGO
ABC13 Houston

You may need to look for a way around this traffic tie-up Friday afternoon. Authorities are working to clear the single-vehicle incident.
HOUSTON, TX・2 DAYS AGO
ABC13 Houston

HCTRA proposes to cut toll rates by 10%, offer EZ tags at no cost

If passed, the rate reduction would go into effect by Labor Day, and authorities hope "it means there's no more excuses for toll running or for evasion."
HARRIS COUNTY, TX・2 DAYS AGO
ABC13 Houston

Downed trees and power lines were covering the area as crews worked to clear it by dusk, and residents were still trying to pick up what was left of their belongings.
BAYTOWN, TX・3 DAYS AGO
ABC13 Houston

Deer Park ISD will open a relief site on Friday with a free meal distribution from 11 a.m. to 1 p.m.
DEER PARK, TX・2 DAYS AGO
ABC13 Houston

"You gotta go through storms before you get to the rainbow," one man said after losing his home in Pasadena and now sleeps in his car with his two dogs.
PASADENA, TX・1 DAY AGO
ABC13 Houston

Searching for normalcy: How those impacted by Texas' tornadoes are finding ways to cope

"You miss the downtime. You miss the normal routine. Everything is out of whack," a man whose home was destroyed told ABC13, remembering his life before the destructive tornado hit.
HOUSTON, TX・1 DAY AGO
ABC13 Houston

'This is home': Students of Deer Park HS partake in clean-up efforts after devastating tornado

Students at Deer Park High School decided to help clean up a beloved skating rink, which would normally see a lot of business on Fridays, that was damaged in the storm.
DEER PARK, TX・1 DAY AGO
ABC13 Houston

Only about 10,000 customers remained without power by late Wednesday night after over 217,000 had their power restored in the wake of the tornado.
DEER PARK, TX・3 DAYS AGO
ABC13 Houston

"We want to make sure that you, your family, your children are well taken care of," Mayor Turner said. Here is what to do and where to go if you've been displaced from your home.
HOUSTON, TX・3 DAYS AGO
ABC13 Houston

A family told Eyewitness News they huddled in the bathroom and a closet when the tornado came barreling through, but they're thankful they've only lost power.
DEER PARK, TX・3 DAYS AGO
ABC13 Houston

In all, ABC13 has learned AJ Armstrong's lawyers subpoenaed nine witnesses - almost all leaders in the community - as part of their bid to keep a third murder trial in Harris County.
HOUSTON, TX・1 DAY AGO
ABC13 Houston

If your home was destroyed or received major damage, this is for you. The Pasadena Convention Center will be open to help residents figure out what next steps to take.
DEER PARK, TX・2 DAYS AGO
ABC13 Houston

The officer can be seen in the video running into the gushing winds to save the dog, which was inside a parked patrol car in front of the police station.
DEER PARK, TX・1 DAY AGO
ABC13 Houston

Officials said one person was confirmed dead and a HCSO sergeant heading to work was injured in the crash due to a probable wrong way driver.
HARRIS COUNTY, TX・6 HOURS AGO
ABC13 Houston

Pasadena made history with the first declared Tornado Emergency in the Houston area. ABC13's chief forecaster explains why some buildings received damage while others nearby did not.
PASADENA, TX・4 DAYS AGO
ABC13 Houston

HOUSTON, Texas -- A social media influencer is generating buzz over his own restaurant. Burger Bodega specializes in smash burgers. The owner, Abbas Dhanani, came up with the concept after running the Instagram @Houstoneatz and working in the familys hospitality business. Burger Bodega began as a pop-up before opening at...
HOUSTON, TX・2 DAYS AGO
ABC13 Houston

Authorities spent more than four hours investigating and then clearing a motorcycle crash on Thursday night.
HOUSTON, TX・2 DAYS AGO