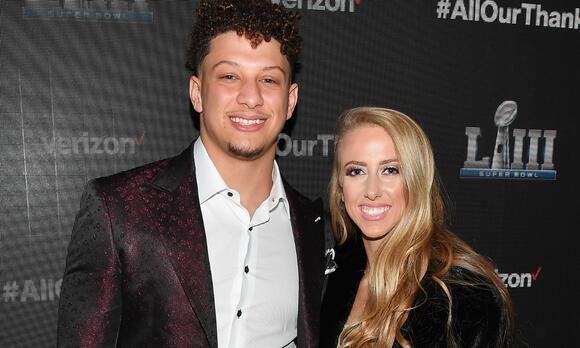 Late last night, Patrick and Brittany Mahomes made the exciting announcement that Sterling officially has a baby brother!

The couple announced the arrival of their son, Patrick “Bronze” Lavon Mahomes III, across social media with a picture of the newborn resting in a blanket emblazoned with the family name, a silver chain with ‘Bronze’ in diamonds rests at his tiny feet. In the caption, they revealed that the newest member of the Mahomes family was born on November 28, 2022 weighing 7 lbs, 8 ounces.

The baby boy is just under two years younger than his sister, Sterling Skye Mahomes, who will turn two in February 2023.

The Mahomes’ friends and family, as well as Chiefs fans across the country, have been awaiting the birth of Bronze since the couple announced they had another child on the way in May, two months after they tied the knot in Hawaii.

Since that time, Brittany Mahomes has kept fans updated on social media with a variety of professional pregnancy shoots and selfies. Just before the birth of Patrick Mahomes III, the mother of two posted a series of photos in which she’s covered only by a length of white gossamer. “Can’t believe I’ll soon have 2 little loves,” Brittany wrote in the caption.

Before announcing her pregnancy with baby No. 2, Brittany Mahomes gushed about being a mom to little Sterling. In a heartwarming Instagram story, the NFL wife shared that she and her daughter couldn’t be closer.

“She makes me the happiest, and even on my bad days, I truly love being with her and doing things with her!” Brittany wrote. “I love watching her grow up every day and start to be able to do things on her own!”

As for Kansas City Chiefs quarterback Patrick Mahomes , he couldn’t adore Brittany and his growing family more, despite the difficult moments that come with raising a baby. “It’s been amazing,” he explained in a 2021 interview with TODAY . “Brittany’s been a champ, she’s been the best mom ever, so I’m just excited every single day for the new challenges and seeing (Sterling) grow.”

“We learned the two most important words in being parents is ‘sleep schedule,'” the QB continued. “We have the sleep schedule down. She’s actually a really good sleeper. She already sleeps through the night. She wakes up about at 6 a.m, just about when I wake up usually.”

“There are moments when she’s crying and Brittany’s at the store or in the shower or something like that, and I have no idea what to do after I try all the tricks,” Mahomes added. “Luckily enough there haven’t been too many of those moments.”

Jason and Travis Kelce needed to place a difficult phone call to pal Rob Gronkowski. About that invite to Gronk Beach. Something’s come up. Basically, it’s the Super Bowl, Gronk. Can’t make your Super Bowl party because we’re both playing in the Super Bowl. First brothers to face off against each other for the Lombardi Trophy. Sorry to turn it down, but not sorry.
15 HOURS AGO
Outsider.com

Good ole’ Florida, the state where go head-to-head with alligators, and people wrangle snakes on a daily basis. In this bizarre albeit unsurprising incident, a Florida man allegedly bit off the head of a pet ball python during a domestic dispute. According to reports via NBC Miami, police responded...
FLORIDA STATE・1 DAY AGO
Outsider.com

Former NFL tight end Kellen Winslow III, who is in prison for sex crimes, is seeking a reduction in his sentence, citing a new criminal reform law in California. The 39-year-old Winslow is representing himself and the petition he submitted was handwritten. But it spells out why he thinks this new criminal justice reform bill applies to his situation. He said he suffered physical trauma, possibly due due to CTE or a mild traumatic brain disorder. Winslow said that trauma played a part in the commission of his crimes. And because of that, “the court is required to impose the lower term (for sentencing considerations).”
CALIFORNIA STATE・1 DAY AGO
Outsider.com

Never one to hold back on sharing his thoughts, Tim Allen gave his take on the Chinese spy balloon and social media has some thoughts. Try Paramount+ FREE for a week. Subscribe here to watch your favorite shows. Featuring a Chinese lantern in the tweet, Tim Allen wrote, “A close...
MONTANA STATE・1 DAY AGO
Outsider.com

Just a couple of months after Candace Cameron Bure’s alleged fallout with Jodie Sweetin over the definition of “traditional marriage,” the former Fuller House stars are reuniting for a special event next month. Try Paramount+ FREE for a week. Subscribe here to watch your favorite shows. In...
HARTFORD, CT・2 DAYS AGO
Outsider.com

Last weekend’s AFC title game ended on controversial terms as a late hit flag against Chiefs quarterback Patrick Mahomes put Kansas City in field goal range to end the game and send them to the Super Bowl. The foul in question was committed by Bengals linebacker Joseph Ossai, who pushed Mahomes after the QB had already established himself out of bounds. A brutal call to end Cincinnati’s season, but the right one, according to the rule book.
KANSAS CITY, MO・2 DAYS AGO
Outsider.com

While promoting his final season as a coach on The Voice, Blake Shelton shares a hilarious story about getting absolutely drunk with Kelly Clarkson. Try Paramount+ FREE for a week. Subscribe here to watch your favorite shows. During a recent episode of Access with Mario Lopez and Kit Hoover, Shelton...
1 DAY AGO
Outsider.com

The Indiana Department of Natural Resources (DNR) recently arrested three Indianapolis residents after they were caught illegally hunting at night and from a roadway. The arrest happened on Saturday night around 8:00 p.m. The suspects in question are Biak Sang, Hrang Lian, and Ro Hmung Lian. WTHI-TV 10 shared the story first.
INDIANA STATE・2 DAYS AGO
Outsider.com

Liam Neeson has a very particular set of skills, but that doesn’t stop him from being annoyed by the hijinks of UFC fighter Conor McGregor. In an interview with Men’s Health, the Taken star declared his loathing for fellow Irishman McGregor, comparing him to a “little leprechaun”. As one of the wealthiest athletes in existence, McGregor made history as the first UFC competitor to own two world titles simultaneously across different weight divisions.
2 DAYS AGO
Outsider.com

Normally, there aren’t much fireworks in a game between a pair of Ohio Valley Conference squads who each have 7-16 records. But college basketball always finds a way to deliver, even in a game such as this. Late in the first half during the Eastern Illinois vs. Lindenwood game...
CHARLESTON, IL・1 DAY AGO
Outsider.com

Since announcing her split from fellow country music star and The Voice coach Blake Shelton in 2015, Miranda Lambert has more than moved on, enjoying life with her current partner, Brendan McLoughlin. Recently, in celebration of their anniversary, Miranda Lambert shared sweet photos of herself and her husband at the beach. Some of the photos even showed off McLoughlin’s abs and Lambert, immensely proud of her relationship, is not shy in the slightest about showing them off.
TENNESSEE STATE・15 HOURS AGO
Outsider.com

NFL fans got their first look at the new Pro Bowl format Thursday night, featuring everything from a longest drive competition to dodgeball. It’s a far cry from the old format, which was — of course — a game that lacked physicality out of fear of injury.
LAS VEGAS, NV・2 DAYS AGO
Outsider.com

Former Pittsburgh Steelers linebacker wondered why his phone was blowing up this weekend. Then he heard about the video ex-teammate and NFL wide receiver Antonio Brown posted. Brown took to social media recently to share that he believed James Harrison gave him CTE while the two were teammates in Pittsburgh. That’s a pretty dangerous allegation to make on Brown’s part.
PITTSBURGH, PA・1 DAY AGO
Outsider.com

A few days ago, Philadelphia Eagles offensive lineman Josh Sills was indicted on rape and kidnapping charges. Now, new facts have emerged regarding the situation, which Fox News shared on Friday. Here were the rather disturbing details on the crime Sills was indicted for:. “The victim, identified at the time...
PHILADELPHIA, PA・2 DAYS AGO
Outsider.com

Sam Ryder was in contention last week at the Farmers Insurance Open, and the same old conversation started again about his pants. Ryder wears joggers and ankle socks, meaning some skin shows between his pants and his shoes. Phil Mickelson — who plays on the LIV Tour, which allows players to wear shorts — was having none of it.
2 DAYS AGO
Outsider.com

Over 40 Vehicles Involved in Deadly Interstate Pileup in Wyoming

One motorist died and several were injured Saturday in a horrific pileup involving 44 vehicles along Interstate 80 between Elk Mountain and Arlington in southern Wyoming. Officials responded to the scene around mileposts 266 and 261 in Carbon County, per Wyoming Highway Patrol. The crash occurred in two separate areas as the result of the brutal winter storm battering the state with feet of snow and roaring wind.
CARBON COUNTY, WY・10 HOURS AGO
Outsider.com

What a bizarre top 10 list. Wouldn’t you think a chart of the top QBs ever to play in the... The post Steelers Fans Can’t Believe Terry Bradshaw, Ben Roethlisberger Left Off of NFL Network’s Top 10 Super Bowl QB’s List appeared first on Outsider.
PITTSBURGH, PA・1 DAY AGO
Outsider.com

Since his career on the field is over (we think) Tom Brady is heading to TV. For Mark Sanchez, it’s... The post Mark Sanchez Expresses Concern Tom Brady Will Ruin His Career a Second Time appeared first on Outsider.
2 DAYS AGO
Outsider.com

Tom Brady likely will be spending more time with his three kids now that he’s retired from the NFL for a second time. But quitting football is going to impact everyone in the family. Like his father, Tom Sr, and his mother, Galynn. What are they going to do...
1 DAY AGO