Indian Country Today is a daily digital news platform that covers the Indigenous world, including American Indians and Alaska Natives. 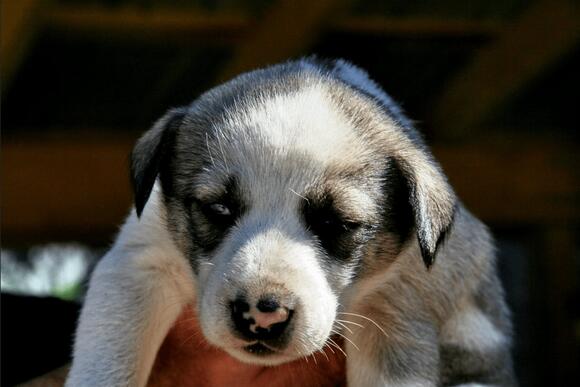 The red fox that approached Laura Anthony’s home in the small Western Alaska village of Nightmute in February sent the dogs outside into a frenzy.

Anthony’s dog, as well as others from the neighborhood, barked and scratched at the wild animal. Among them was Marvin, a neighbor’s beloved 10-month-old, golden-brown husky mix that Anthony would feed when he came to her window.

Nightmute is a predominantly Alaska Native village in the Yukon-Kuskokwim Delta along the Bering Sea with fewer than 300 residents. It’s one of dozens of Northwest and Western Alaska communities off the road system where rabies poses an ongoing threat, especially given the high number of pets that aren’t vaccinated against the disease.

As the animals fought that February day, one of Anthony’s neighbors struck the fox with a shovel, killing it. Based on its behavior and because it was in such close contact with dogs, Anthony shipped the fox’s body to a public health laboratory to get tested for rabies.

A week later, the test came back positive.

Anthony’s dog, the only one vaccinated against the disease, survived the incident.

Nearly 200 communities in Alaska, like Nightmute, don’t have a regular vet, advocates say.

“The lack of access to veterinary care is an ongoing public health crisis in Alaska Native communities, severely impacting the quality of life for residents,” according to an Alaska Federation of Natives resolution adopted in October.

Alaska Native children have the highest incidence of hospitalization for dog bites in the Indian Health Service system, the resolution states. Stray dogs carry diseases and parasites that can create health and sanitary risks, but killing them is mentally traumatizing to residents.

People in western and northern Alaska “live under constant threat of rabies,” the resolution continues, and providing basic veterinary care is the only way to control what it calls human health disparities.

A goal of the resolution is to spur the Indian Health Service to allocate more funding to a problem that it’s long refused to address, according to Angie Fitch, founder of the nonprofit Alaska Native Rural Veterinary Inc. and one of the authors of the resolution.

The federal agency, which is responsible for providing federal health services to American Indians and Alaska Natives, had not responded to the resolution as of last week. An Indian Health Service spokesperson did not respond to requests for comment for this story.

The resolution is on the agenda for the Alaska Federation of Natives’ December meeting.

Earlier this month, when Fitch drove up to the courthouse in Gambell where Alaska Native Rural Veterinary was hosting a makeshift veterinary clinic, there were people already in line with their dogs, ready for care.

“My phone was off the hook all day,” said Fitch.

A decade ago, when Fitch first founded the nonprofit that sends vets out to rural communities to provide much-needed care for free, many of the residents she visited had never met a veterinarian.

Veterinary care in rural Alaska has long been sporadic and hard to come by, said Bob Gerlach, Alaska’s state veterinarian. Many villages rely on nonprofits like Fitch’s that visit around once or twice year, if that.

And even the sporadic care is relatively recent. When Anthony moved to Nightmute nearly 30 years ago, “no one ever came out here,” she said. “There was really nothing.”

More recently in the Bethel area, a state and grant-funded “One Health” veterinary program out of the University of Alaska Fairbanks has provided care to some communities in the region.

Thanks to a grant the program received from PetSmart Charities, the program was able to fund a veterinarian based out of Bethel who travels to nearby villages with students in tow, offering vaccination clinics, spay and neuter clinics, and education, said Arleigh Reynolds, a former dog musher and associate dean of the program.

When the program was paused for a few years due to the pandemic, Reynolds said he and others became aware of just how apparent the need was.

“Now we have a backlog of communities we’re trying to visit,” he said.

Adored, but at times dangerously overpopulated

Dogs are beloved across rural Alaska.

Often when Dr. Laurie Meythaler-Mullins, a Bethel-based public health veterinarian, travels door to door in village communities, she’s followed by a gaggle of dogs and small children, she said.

“They’re intertwined: dogs love children, and children love dogs,” Meythaler-Mullins said. “And that’s one thing I commonly hear is, we want to keep our children safe and healthy. And healthy dogs lead to a healthy community.”

Veterinarians perform services that, among other things, relate to food safety and subsistence living, reducing diseases in dogs that could spread to wildlife, according to state veterinarian Gerlach.

In Akiak, Mike Williams Sr., a village elder and dog musher, has been trying to protect the dogs he loves from rabies and other diseases for as long as he can remember. Williams participates in the state health department’s “lay vaccinator” program, which trains regular people to perform rabies vaccinations.

“It’s not only our dogs or animals in that community that we are protecting,” he said. “Our subsistence resources are affected by the kind of environment that we take care of and we have to make sure that we eat safe foods.”

But without regular access to spay and neuter clinics, many rural communities also have more dogs than people who can care for them.

“When there’s an overpopulation, they become dangerous,” Fitch said. “They pack up, and fight, and maul children.”

According to Reynolds, the Yukon-Kuskokwim Delta region experiences seven times the national average of recorded dog bites among children.

“And I emphasize the word ‘recorded’ there, because in order for a dog bite to be recorded, it has to be severe enough that the child is taken to a clinic,” he said. “So I think that number is actually pretty under-reported.”

Every year in Alaska, between five and 20 people will be exposed to rabies, according to Reynolds. For rural Alaskans, an exposure is exceptionally costly: They must fly to Anchorage or Bethel for treatment that can take several days and cost thousands of dollars without insurance.

Often, the only way to deal with packs of feral dogs that may pose a threat to people is to shoot them, Reynolds said.

For those put in that position — in most cases, village police officers like the one called to shoot Marvin — “it’s tremendously traumatic,” he said. “It’s one of the big reasons why people leave the village public safety officer positions, because they hate shooting dogs.”

In the days after the Nightmute fox exposure, following the correct protocol — putting down the dogs that came into contact with the rabid animal — was difficult for residents who weren’t completely sure if their beloved pets had been involved.

Rabies affects mammals and, if left untreated, is a fatal illness in humans. It’s existed in northern and western Alaska for decades.

“In hindsight, we know which dogs were involved because they got rabies,” Anthony said. “But no one wanted to kill an innocent dog.”

There was one dog in particular that Anthony and her family were worried about: Marvin.

A few days after the fox encounter, Marvin “started licking everyone,” Anthony said.

He never got aggressive, but he did lick her child’s face. After that, she stopped letting him inside the house when he asked for food.

Then one day, Anthony heard a thump out on her porch. It was Marvin. He’d collapsed. She knew right away what had happened: Marvin was sick. She called the village police officer. He shot Marvin.

Anthony said that in some ways, she felt fortunate because her children’s health insurance paid for the nine-day trip her family was forced to take to Bethel to get the post-exposure rabies treatment that included multiple shots, weather-related delays and closures at the village school where Anthony teaches.

Anthony said that initially, she was embarrassed that her family had gotten exposed to rabies. But she said the more she started talking to people about it, the more she realized how common it was — that she wasn’t the only one.

But she and her children are still heartbroken about the death of a dog they loved.

“Marvin was just an uncommonly intelligent dog,” she said. “He was big and beautiful. And it sucks that that happened to him.

Reprinted with permission from the Anchorage Daily News .

Indian Country Today is a daily digital news platform that covers the Indigenous world, including American Indians and Alaska Natives.