Man stabbed in neck while sleeping at west Tulsa motel 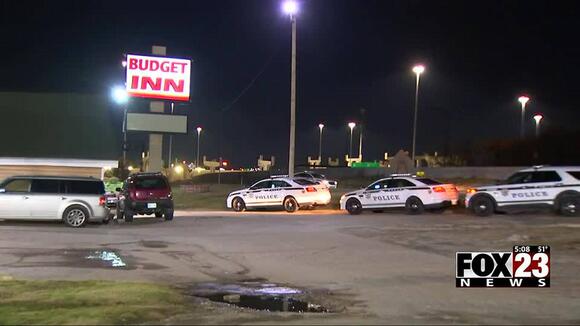 TULSA, Okla. — A man is in critical condition after he was stabbed in the neck while sleeping inside a west Tulsa motel room Monday night, according to Tulsa police.

Police said Eryck Pippin admitted he stabbed the man just before midnight at a Budget Inn near Interstate 44 and U.S. Highway 75. Police said Pippin is the victim’s significant other.

“Apparently there were no arguments today. They’ve lived here together for a while. The victim was asleep and the suspect just decided to stab him. There’s no rhyme or reason,” said Tulsa Police Capt. Jarrod Hart.

Police said Pippin told them he locked his dog in the bathroom before he stabbed the victim to make sure the dog didn’t get hurt. Pippin was booked into the Tulsa County jail for assault and battery with a dangerous weapon.

The victim was taken to a hospital where he is in critical condition with deep stab wounds to his neck.

TULSA, Okla. — Two firefighters were injured after they were hit by a car on U.S. Highway 75, according to the Tulsa Fire Department (TFD). TFD said it happened on US-75, near East Pine Street and North Peoria Avenue. According to TFD Public Information Officer Andrew Little, a vehicle...
TULSA, OK・17 HOURS AGO
KRMG

TULSA, Okla. — Tulsa Police arrested a man following a foot chase on Friday night, according to the Tulsa Police Department (TPD). TPD said around 9:00 p.m. on Friday, they were approached by a concerned citizen near E. 41st St. and S. Memorial Drive. That citizen claimed to have seen a man smoking marijuana in a car parked at a nearby store.
TULSA, OK・19 HOURS AGO
KRMG

TULSA, Okla. — A man, who police say kidnapped and strangled his domestic partner, was arrested following a chase through Tulsa Saturday evening, according to the Tulsa Police Department (TPD). TPD said they were called out around 2:00 p.m. to investigate a domestic assault. TPD interviewed the victim, who...
TULSA, OK・1 DAY AGO
KRMG

One hospitalized after motorcycle crash in Tulsa

TULSA, Okla. — A motorcyclist was sent to the hospital following a collision Saturday evening in Tulsa, according to the Tulsa Police Department (TPD). TPD said they were called to the accident, which took place near E. 31st St. and S. Sheridan Rd., around 6:40 p.m. According to TPD,...
TULSA, OK・1 DAY AGO
KRMG

GLENPOOL, Okla. — An 18-year-old from Owasso is dead following a car crash in Glenpool, according to the Oklahoma Highway Patrol (OHP). OHP said the crash occurred around 2:00 a.m. on Saturday in a neighborhood near E. 141st St. and S. Elwood Ave. The crash involved one car with...
GLENPOOL, OK・1 DAY AGO
KRMG

Roads are slick in eastern Oklahoma as a winter weather advisory is in effect for Green Country. The Oklahoma Department of Transportation (ODOT) and Oklahoma Turnpike Authority said as of 5:30 a.m., road crews are reporting freezing drizzle and slick spots impacting highways in eastern Oklahoma, especially in Tulsa and along Interstate 44.
TULSA, OK・8 HOURS AGO
KRMG

TULSA, Okla. — A teenager was taken into custody Saturday morning in connection with an armed robbery and carjacking, Tulsa police said. Tulsa police said the 17-year-old suspect stole a Ford Mustang and property from the victims at gunpoint near 54th and Yale before driving off in the victims’ car around 4 a.m.
TULSA, OK・2 DAYS AGO
KRMG

Will Rogers Turnpike in Claremore narrowed due to crash

CLAREMORE, Okla. — The Oklahoma Turnpike Authority (OTA) is reporting a crash that’s impacting traffic in Claremore. OTA said as of 7:15 a.m., the Will Rogers Turnpike is narrowed due to the crash. The right lane of the turnpike westbound is closed near the State Highway 20 exit...
CLAREMORE, OK・7 HOURS AGO
KRMG

TULSA COUNTY, Okla. — Tulsa County said all of its facilities will open late at 9 a.m. Monday due to icy road conditions. This include the Tulsa County Government Headquarters, the courthouse and all other facilities. Oklahoma Department of Transportation road crews are reporting freezing drizzle and slick spots...
TULSA COUNTY, OK・7 HOURS AGO
KRMG

Man dead after being hit by vehicle on Highway 169, police say

TULSA, Okla. — A man died on Friday evening after being hit by a vehicle in the northbound lane of Highway 169 just south of Pine Street. Tulsa Police said a man was in the road when he was struck by an oncoming vehicle. FOX23 has a crew on...
TULSA, OK・2 DAYS AGO
KRMG

Police: One dead in motorcycle crash in Collinsville

COLLINSVILLE, Okla. — Collinsville Police confirmed one person has died following a crash near 146th Street North and 137th East Avenue. Police Chief Matt Burke told FOX23 a person on a motorcycle crossed over into the opposite lane and struck a truck head on. The motorcycle driver was pronounced...
COLLINSVILLE, OK・2 DAYS AGO
KRMG

TULSA, Okla. — Country artist Luke Bryan is bringing his “Country on Tour” show to downtown Tulsa this fall. Bryan, who is also featured as a judge on “American Idol,” will headline the BOK Center on Sept. 30. Special guests throughout the tour include Chayce...
TULSA, OK・5 HOURS AGO
KRMG

TULSA, Okla. — When it comes to New Year’s Resolutions, losing weight is at the top of the list. Unfortunately, that can lead to scams. The Better Business Bureau reports most weight loss product scams start with promises that are simply too good to be true. Amie Mitchell...
TULSA, OK・15 HOURS AGO