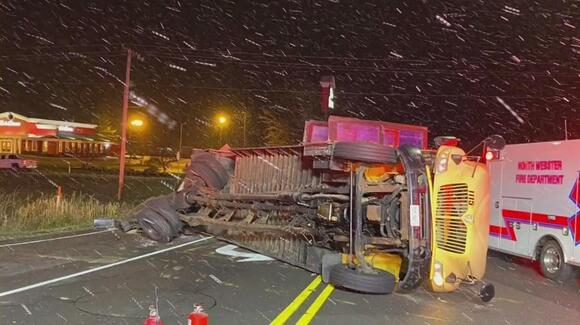 CHICAGO (CBS)-- Sixteen St. Ignatius College Prep junior varsity hockey players, their parents and coaches filed a lawsuit after their team bus was hit by a semi- truck in Indiana earlier this month.

The lawsuit names the truck driver and two trucking companies accusing them of willful disregard of the safety of those on that bus.

The driver who hit the bus was identified as Victor Santos, 58, from Brooklyn, New York City. He was charged with 26 felony counts each of criminal recklessness and causing serious bodily injury while operating a vehicle – both felonies.

The lawsuit claims his blood alcohol level was almost twice the legal limit at the time of the crash.

Santos was stopped just after he drove off the road. He failed a breath test, police said.

The crash sent 16 of the players to a local hospital at least three players were seriously hurt.

The injured players are expected to discuss the lawsuit later Tuesday during a press conference.

A St. John, Indiana police officer charged with shooting at an off-duty Hammond police officer has resigned from the force.Officer Phillip J. Fabian, who is facing a felony charge of criminal recklessness and a misdemeanor charge of criminal mischief, resigned from the St. John Police Department before a Monday special meeting of the Board of Safety of the Town of St. John to consider a recommendation from the police chief in reference to Fabian, according to St. John Police.Meantime, Fabian is due in court next week for an initial hearing on his charges.In November, we heard different versions of the same story...
HAMMOND, IN・1 DAY AGO
CBS Chicago

Illinois Gaming Board to vote on license for temporary Bally's Casino

CHICAGO (CBS) -- The Illinois gaming board meets in Chicago Wednesday to vote on a license for a temporary Bally's Casino in the city.It's the first step toward a new, permanent casino in the River West neighborhood.The make-shift location would be at the Medinah Temple on Ohio Street in River North. Back in September, we reported on a traffic study that found the area will be able to handle the increase in traffic caused by the temporary gaming operations. A newly constructed Bally's Casino is set to open in River West sometime in 2026.
CHICAGO, IL・1 HOUR AGO
CBS Chicago

CHICAGO (CBS)-- More than 30 dogs and puppies from Texas have arrived at PAWS Chicago. They came from a shelter damaged by a tornado. Many of the animals were inside a shelter near Houston, when a tornado ripped the roof off in a storm.While easing overcrowding, this will allow rescue groups down there to focus on fostering the pets of those families working to repair their damaged homes.The dogs will soon be ready for adoption.
CHICAGO, IL・1 DAY AGO
CBS Chicago

CHICAGO (CBS) -- Some Illinois residents need a form from the state to file their taxes and for the third year in a row – and there are huge problems accessing it.CBS 2's Tara Molina brought those problems straight to the Illinois Department of Employment Security on Monday.The tax form in question is something those who have filed for unemployment need this time of year. It's called a 1099-G form, and for the third year in a row, people are reaching out to us since they're having issues getting it from the state. So we are asking - why is...
ILLINOIS STATE・1 DAY AGO
CBS Chicago

The suspected Chinese spy balloon that has been drifting across the United States for several days has been shot down off the coast of South Carolina.The balloon was shot down by U.S. fighter jets in U.S. airspace at 2:39 p.m. ET on Saturday, U.S. officials confirmed to CBS News. A senior defense official told CBS News that an F-22 dispatched out of Langley Air Force Base took down the balloon with one AIM-9X air-to-air missile. Defense officials previously told CBS News that the surveillance equipment attached to the balloon was the size of two to three school buses. Senior Biden administration officials...
SOUTH CAROLINA STATE・3 DAYS AGO
CBS Chicago

CHICAGO (CBS) -- Lawmakers in Springfield are hoping a proposed child tax credit can help working families.Under legislation recently introduced to the Illinois General Assembly, low- and middle-income families would receive a $700 income tax credit for each child under age 17.Joint filers earning less than $75,000 and single filers earning less than $50,000 would be eligible."Working parents are struggling worse than ever before. It is time for the state to create a permanent Child Tax Credit that puts money back into the pockets of parents in Illinois, so that parents can take care of their children and communities can begin to recover," said Illinois State Sen. Mike Simmons (D-Chicago), one of the sponsors of the proposed tax credit.No hearings have yet been scheduled for the proposed legislation.
ILLINOIS STATE・17 HOURS AGO
CBS Chicago

CHICAGO (CBS) -- Respected and oft-quoted public budget and fiscal policy expert Laurence Msall has died unexpectedly. Msall was the longtime president of the Civic Federation, one of Illinois' top government research organizations. The Civic Federation announced he died Saturday afternoon surrounded by family following complications from surgery. They called his passing "a devastating blow."Gov. JB Pritzker paid tribute to Msall, saying, "He served our state proudly under Governors Ryan and Thompson and will be remembered for his advocacy in confronting complex policy challenges." Mayor Lori Lightfoot called him a kind and generaous man whose "contributions to the betterment of our city cannot be measured."Msall was 60 years old.
CHICAGO, IL・3 DAYS AGO