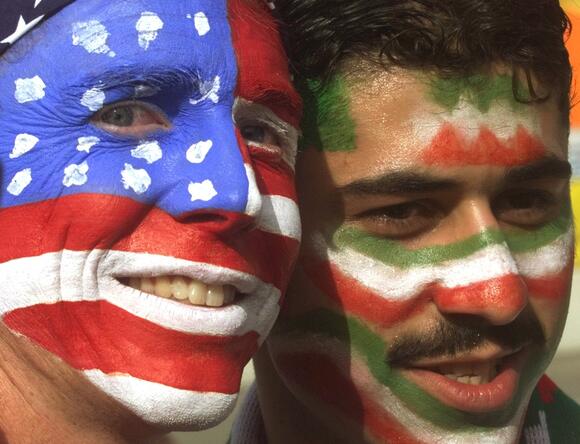 DOHA, Qatar (AP) — The last World Cup clash between the United States and Iran 24 years ago is considered one of the most politically charged matches in soccer history.

This time, the political overtones are just as strong and relations perhaps even more fraught as the U.S. and Iran face off once again on Tuesday in Qatar.

Iran’s nationwide protests, its expanding nuclear program and regional and international attacks linked back to Tehran have pushed the match beyond the stadium and into geopolitics.

Watch : Fans in Providence cheer on as the U.S. plays Iran in their World Cup match (Story continues below.)

No matter the outcome, tensions are likely only to worsen in the coming months.

When relations soured between the U.S. and Iran depends on who you ask. Iranians point to the 1953 CIA-backed coup that cemented Shah Mohammed Reza Pahlavi’s power. Americans remember the 1979 U.S. Embassy takeover and 444-day hostage crisis during the Iranian Revolution.

In soccer, however, the timeline is much simpler as this will be only the second time Iran and the U.S. have played each other in the World Cup.

The last time was at the 1998 tournament in France — a totally different time in the Islamic Republic. Iran won 2-1 in Lyon, a low point for the U.S. men’s team as Iranians celebrated in Tehran.

But off the pitch, Iran’s then-president, Mohammad Khatami, sought to improve ties to the West and the wider world. Inside Iran, Khatami pushed so-called “reformist” policies, seeking to liberalize aspects of its theocracy while maintaining its structure with a supreme leader at the top.

U.S. President Bill Clinton and his administration hoped Khatami’s election could be part of a thaw .

The two teams posed for a joint photograph, and the Iranian players handed white flowers to their American opponents. The U.S. gave the Iranians U.S. Soccer Federation pennants. They even exchanged jerseys, though the Iranians didn’t put them on. They later played a friendly in Pasadena, California, as well.

Fast-forward 24 years later, and relations are perhaps more tense than they’ve ever been.

Iran is now governed entirely by hard-liners after the election of President Ebrahim Raisi, a protege of Khamenei, who took part in the 1988 mass execution of thousands of political prisoners at the end of the Iran-Iraq war .

Following the collapse of Iran’s 2015 nuclear deal with world powers, sparked by President Donald Trump’s unilateral withdrawal from the accord, Tehran is now enriching uranium to 60% purity — a short, technical step from weapons-grade levels. Non-proliferation experts warn the Islamic Republic already has enough uranium to build at least one nuclear bomb.

A shadow war of drone strikes, targeted killings and sabotage has been shaking the wider Middle East for years amid the deal’s collapse. Meanwhile, Russia pounds civilian areas and power infrastructure in Ukraine with Iranian-made drones.

For two months, Iran has been convulsed by the mass protests that followed the Sept. 16 death of Mahsa Amini, a 22-year-old woman who had been earlier detained by the country’s morality police . The protests have seen at least 451 people killed since they started, as well as over 18,000 arrested, according to Human Rights Activists in Iran, an advocacy group following the demonstrations.

At the World Cup in Qatar, Iran’s 2-0 win against Wales provided a brief moment of good news for hard-liners. After the match, riot police in Tehran waved Iranian flags in the street, something that angered demonstrators. Khamenei himself acknowledged the win “stirred joy in the country.”

However, the supreme leader warned that “when the World Cup is taking place, all eyes are on it. The opponent typically takes advantage of this lax moment to act.”

As the demonstrations intensified, Iran has alleged without providing evidence that its enemies abroad, including the U.S., are fomenting the unrest. At a World Cup where organizers hoped to divorce politics from the pitch, those tensions have bled out around the stadiums with pro- and anti-government demonstrators shouting at each other .

Ahead of Tuesday’s match at Al Thumama Stadium, Iran has released a propaganda video with young children singing, including girls in white hijabs, in front of a small field. Waving flags and set against a blasting synthesizer beat, the children sing: “We back you on the bleachers, all with one voice Iran, Iran.”

“We are waiting for a goal, our heart second by second is beating for our Iran,” they add.

Such a win could prove to be a further boost to hard-liners. Already, they’ve reacted angrily to a protest by the U.S. Soccer Federation that saw them briefly erase the emblem of the Islamic Republic from Iran’s flag in social media posts .

It’s unclear whether any Iranian or U.S. government officials will be on hand for the match. U.S. Secretary of State Antony Blinken already attended the U.S. match against Wales at the start of the tournament.

But opponents of Iran’s government are on hand in Qatar with their own message. Among them is former U.S. State Department spokeswoman Morgan Ortagus, who flew in Monday afternoon for the Iran match. Ortagus served in the Trump administration and was one of the faces of its so-called “maximum pressure” campaign.

“It’s one of those pivotal moments when geopolitics and sports collides,” Ortagus told The Associated Press. “You’re seeing the Iran team do what they can to stand up for the protesters and the people peacefully demonstrating.”

President Joe Biden is a man who writes down his thoughts. And some of those handwritten musings over his decades of public service are now a part of a special counsel's investigation into the handling of classified documents.
WILMINGTON, DE・1 DAY AGO
WPRI 12 News

The U.S. was tracking a suspected Chinese surveillance balloon spotted over American airspace, and China said that it would look into those reports.
MONTANA STATE・23 HOURS AGO
WPRI 12 News

A lawyer for President Joe Biden’s son, Hunter, asked the Justice Department in a letter Wednesday to investigate close allies of former President Donald Trump and others who accessed and disseminated personal data from a laptop that a computer repair shop owner says was dropped off at his Delaware store in 2019.
DELAWARE STATE・1 DAY AGO
WPRI 12 News

Pope Francis, on a novel ecumenical peace mission to the world’s youngest country, warned South Sudan’s political leaders on Friday that history will judge them harshly if they continue to drag their feet implementing a 2018 peace accord.
16 HOURS AGO
WPRI 12 News

The Woonsocket woman accused of killing her own father earlier this week claimed she "had to do it," according to court documents.
WOONSOCKET, RI・2 DAYS AGO
WPRI 12 News

The Woonsocket woman accused of stabbing her father to death with a pair of garden shears faced a judge Thursday.
WOONSOCKET, RI・1 DAY AGO
WPRI 12 News

MT. WASHINGTON, N.H. – Mount Washington, the highest peak in the Northeast, recorded the coldest wind chill in the history of the United States on Friday when an arctic air mass hit New England. According to the Mount Washington Observatory, a new record-low air temperature was recorded on Friday at -40 degrees Fahrenheit as of […]
WASHINGTON STATE・9 HOURS AGO
WPRI 12 News

How to safely crank up the heat in frigid conditions

The record-breaking cold may make you want to turn up the heat this weekend.
RHODE ISLAND STATE・1 DAY AGO
WPRI 12 News

5 ways to prevent pipes from freezing in your home

When temperatures drop well below freezing, the pipes that run through your home run the risk of freezing. Aside from the short-term inconvenience, this can cause the pipes to crack and lead to costly repairs.
EAST PROVIDENCE, RI・1 DAY AGO
WPRI 12 News

Police are searching for a man who reportedly shot two people inside a Brockton store.
BROCKTON, MA・2 DAYS AGO
WPRI 12 News

A portion of Phenix Avenue in Cranston is shut down after a tree fell onto a power line.
CRANSTON, RI・14 HOURS AGO
WPRI 12 News

The rate at which autism spectrum disorder is being diagnosed in young children has skyrocketed, according to a study released last week.
EAST PROVIDENCE, RI・2 DAYS AGO
WPRI 12 News

The flames broke out Friday afternoon at a home on Highland Avenue.
FALL RIVER, MA・14 HOURS AGO