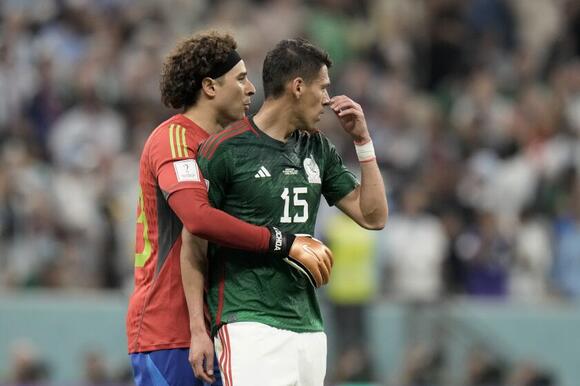 Mexico is going to have to suddenly find goals — and perhaps even several of them — to extend its knockout-round streak at the World Cup.

Mexico has reached the round of 16 at the last seven World Cups, tied for the longest current streak with Brazil. But in Qatar, El Tri sits at the bottom of Group C ahead of a must-win match against Saudi Arabia on Wednesday at Lusail Stadium.

The last time Mexico played at soccer's biggest tournament and didn't advance out of its group was in 1978.

But it's not quite as simple as winning: El Tri must also get help. They'll need Poland to beat Lionel Messi and Argentina at the exact same time at Stadium 974.

That's the easiest way forward for Mexico. Beyond that, it gets complicated. If Mexico does its job and wins but Argentina, one of the tournament's favorites, also wins, then goal difference comes into play.

The problem is, Mexico has no goals yet in Qatar.

In fact, El Tri hasn't scored in 384 straight minutes at the World Cup, dating back to their second group match at the 2018 tournament in Russia.

“We believe in our chances. We hold on to our chances," said veteran Mexico midfielder Andres Guardado, who is appearing in his fifth World Cup. “And obviously we will try until the very end.”

The drought was extended Saturday with a 2-0 loss to Argentina. Neither team scored in the Mexico’s opener against Poland.

Mexico hasn't been eliminated from the group stage since the tournament in Argentina 44 years ago. El Tri didn't qualify for the 1982 World Cup in Spain, and was banned from the 1990 event in Italy for using overage players at an under-20 tournament.

Since then, Mexico has advanced to the round of 16 in its last seven appearances — but no further. El Tri came to Qatar looking to play in an elusive “quinto partido” — a fifth game — for the first time since Mexico hosted the tournament in 1986.

“In the next game we have no more chances,” Mexico forward Henry Martin said. “We have to score the goals that we can, and not worry what happens in the other game.”

With the lack of goals, the criticism of Mexico coach Gerardo “Tata” Martino grew. He had already been questioned over some of his choices, including his decision to leave all-time leading scorer Javier “Chicharito” Hernandez off the team.

Hernandez, who now plays for the LA Galaxy in Major League Soccer, scored the team's last goal in a 2-1 group-stage victory over South Korea in Russia. LAFC forward Carlos Vela, who also fell out of favor in the national team, scored the other.

Martino could be looking for a new job if Mexico doesn’t advance after playing Saudi Arabia, a team that pulled off one of the tournament’s biggest upsets ever when it beat Argentina 2-1 in its opener.

“Not getting through would leave a lot of frustration," Martino said Tuesday. "We need the goals to win, that is what it takes to keep us here.”

Saudi Arabia couldn't pull off another upset Saturday when it fell to Poland 2-0. The Saudis reached the round of 16 back in 1994, the team's World Cup debut, but hasn't made it past the group stage since.

“We will play to the last second of this tournament and we will not give up,” Saudi Arabia coach Herve Renard said.

Nawaf Al-Abed sustained an ankle injury against Poland and it was unclear if he would be available against Mexico.

Messi has doubts about playing 2026 World Cup at age 39

Lionel Messi may be in doubt as to whether he'll be still playing for Argentina at the 2026 World Cup but he's sure about one thing: he wants Lionel Scaloni to stay on as head coach until then
3 HOURS AGO
San Diego Union-Tribune

The U.S. says it is tracking a suspected Chinese surveillance balloon that has been spotted over U.S. airspace for a couple days
MONTANA STATE・46 MINUTES AGO
San Diego Union-Tribune

The video sparked discussions on social media about what kind of weapon could be responsible for the attack.
2 DAYS AGO
Futurism

Instead of Predicting Length of Winter, Groundhog Simply Dies

Having a groundhog predict the end of winter is a tradition shrouded in Pennslyvania Dutch superstition, which dates back hundreds of years. And while science casts doubt on whether the lowland creatures are actually able to predict a late spring by seeing their own shadow, it's a comforting ritual. Except...
11 HOURS AGO
San Diego Union-Tribune

The company aims to help Ukraine with intelligence but first must get approval from the U.S. government.
SAN DIEGO, CA・1 DAY AGO
San Diego Union-Tribune

The United States has asked the Sudanese government to re-arrest a man convicted of killing a U.S. diplomat in the country 15 years ago
5 HOURS AGO
San Diego Union-Tribune

U.S. officials say four key suspects in the killing of Haitian President Jovenel Moïse have been transferred to the United States for prosecution as the case stagnates in Haiti amid death threats that have spooked local judges
2 DAYS AGO
San Diego Union-Tribune

A 30-foot bollard-style fence, towering over Friendship Park and its visitors, is a symbol of hate rather than love.
SAN DIEGO, CA・2 HOURS AGO
San Diego Union-Tribune

North Korea says it's prepared to counter U_S_ military moves with the "most overwhelming nuclear force" as it warned that the expansion of the United States' combined military exercises with rival South Korea is pushing tensions to an "extreme red line."
WASHINGTON STATE・23 HOURS AGO
San Diego Union-Tribune