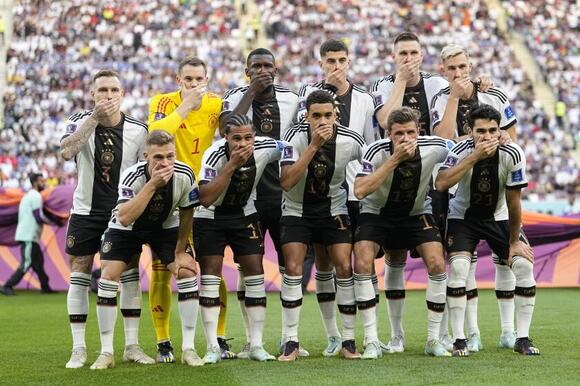 Soccer — or football, to most of the global billions watching the World Cup this month — is not human society itself, with all its thorny issues. But at times, the game is a reflection of the entire planet — of nations, their disputes, their aspirations and those of a multitude of minority communities.

FIFA president Gianni Infantino followed this up on the eve of the opening match with a one-hour diatribe against all who had criticized the host nation's human rights record, the conditions that led to thousands of migrant workers dying building the nation's glittering new stadiums and its stance on LGBTQ issues.

Fans from around the world have a different idea of what that “center stage” should show. Many, but not all, Iranians attending matches in Qatar have wanted to express their support for protesters at home. And they’ve wanted the team to do the same.

Other political issues have been erupting fast and furious on a near-daily basis. And outside the World Cup bubble, the world itself has kept turning in some of its most fractious events, both unsurprising and surprising: Russia's war in Ukraine , mass shootings in the United States and the sudden eruption of protests in China .

Of the sporting spirit, George Orwell wrote: “I am always amazed when I hear people saying that sport creates goodwill between the nations, and that if only the common peoples of the world could meet one another at football or cricket, they would have no inclination to meet on the battlefield.”

His point stands. Russia was banned from this World Cup after hosting the previous one in 2018, mirroring the isolation the country and its leaders face for the Ukraine invasion. Ukraine itself fell at the last hurdle for qualification, with fans at home likely more concerned about bombardment and survival amid electricity and water shortages than watching matches in Qatar.

Decades of enmity between the United Sates and Iran have been seeping into the buildup before the two nations play a critical World Cup match Tuesday that could see one of the countries progress to the knockout stages. The U.S. Soccer Federation briefly displayed Iran’s national flag on social media without the emblem of the Islamic Republic, saying the move supported protesters inside Iran. The Tehran government reacted by accusing America of removing the name of God from its national flag.

The century-long Israeli-Palestinian conflict , including Israel’s occupation of lands Palestinians want for a future state, has also featured in Qatar, though neither national team is competing. The Palestinian flag and pro-Palestinian fans have been prominent, while Israeli media and fans have been less welcome in an Arab nation that has not normalized relations with Israel.

As Morocco completed a famous victory over the highly-ranked stars of Belgium Sunday, unrest broke out in Belgian cities and also in the Netherlands , where the immigrant North African community has long been marginalized. “Those are not fans; they are rioters. Moroccan fans are there to celebrate,” the mayor of Brussels said.

LGBTQ rights have been at the fore in Qatar as well, with the country under the microscope for its human rights record and laws criminalizing homosexuality.

Germany’s players covered their mouths for the team photo before their opening match to protest against FIFA following the governing body’s clampdown on the “One Love” armband. Sporting rainbow colors, a symbol of LGBTQ rights, has been a key contentious issue. Some European officials have brought those colors to the stands.

Qatari soccer fans responded to Germany’s protest by holding pictures of former Germany playmaker Mesut Özil while covering their mouths. This referenced Ozil, a German-born descendant of Turkish immigrants, quitting the national team after becoming a target of racist abuse and a scapegoat for Germany’s early World Cup exit in 2018. “I am German when we win, but I am an immigrant when we lose,” Özil said at the time.

Keeping the world out of sport, as this tournament and many World Cups and Olympics before have shown, is well nigh impossible. This is especially true in a hyperconnected world, with each word, each gesture, each celebration or outpouring of dismay magnified for a global audience.

Football may indeed claim center stage when these matches are watched and nations' nervous systems go through the wringer. But day-to-day complex issues are never far from the surface, always ready to burst through and dominate. The rest of the world, it turns out, doesn't end where the soccer pitch begins.

Tamer Fakahany, deputy director for global news coordination at The Associated Press, has helped direct international coverage for the AP for 20 years. Follow him on Twitter at https://twitter.com/tamerfakahany

"The girls from Ukraine and Switzerland simply ran from me like fire," Anna Linnikova told Evening Moscow.
LOUISIANA STATE・2 DAYS AGO
Newsweek

North Korea shut the door for talks or negotiations with the US as it accused Washington of pushing the nuclear crisis in the region to an “extreme red line”.It warned of “the toughest reaction to any military attempt” by the West.The spokesperson of North Korea’s foreign ministry warned that any military challenge by the US and its allies will be met with the “most overwhelming nuclear force” by Pyongyang.“The DPRK is not interested in any contact or dialogue with the US as long as it pursues its hostile policy and confrontational line,” an unidentified spokesperson said on Thursday, according...
WASHINGTON STATE・12 HOURS AGO
San Diego Union-Tribune

Indian Ocean countries who want better safeguards for marine life by updating fishing quotas and restricting harmful catch methods are being resisted by the European Union who has interests in the region, conservation groups say
5 HOURS AGO
San Diego Union-Tribune

German authorities say that nine men suspected of involvement in blowing up dozens of cash machines in Germany and stealing some 5.2 million euros (nearly $5.7 million) have been arrested in the Netherlands and Belgium
6 HOURS AGO
San Diego Union-Tribune

Hungary's foreign minister says what the United States ambassador to Budapest thinks about Hungarian policies is "completely irrelevant," and that the ambassador should stop interfering in Hungary's internal affairs
WASHINGTON STATE・4 HOURS AGO
San Diego Union-Tribune

US Figure Skating blasts delay in awarding of Beijing medals

U.S. Figure Skating has had enough with the delays over the awarding of team medals from the Beijing Olympics
2 HOURS AGO
San Diego Union-Tribune

North Korea says it's prepared to counter U_S_ military moves with the "most overwhelming nuclear force" as it warned that the expansion of the United States' combined military exercises with rival South Korea is pushing tensions to an "extreme red line."
WASHINGTON STATE・16 HOURS AGO
San Diego Union-Tribune

An Iranian director who was arrested last summer, weeks before his latest film was released to widespread acclaim, has gone on hunger strike
7 HOURS AGO