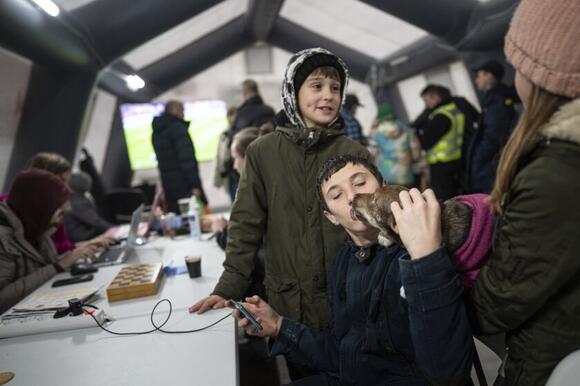 Retired Ukrainian construction worker Borys Markovnikov is on the move again: This time, just a few steps from his home in the town of Bucha, northwest of Kyiv, to seek shelter and warmth at a “Point of Invincibility” — a government-built help station that serves food, drinks, warmth and ultimately, resilience, in the face of Russia’s military onslaught.

In recent weeks, Ukraine has rolled out hundreds of such help stations, christened with a name of defiance as places where residents facing outages of power, heating and water can warm up, charge their phones, enjoy snacks and hot drinks, and even be entertained.

Markovnikov, 78, has had to move a few times. He recalled how he was driven from his home in the eastern Donbas region after Russian-backed separatists seized territory there in 2014. Earlier this year, he fled his adopted town of Bucha — now infamous for massacres during a brief occupation by Russian forces — on foot, across the front line, to Kyiv. Later. he was able to return home, but home is not always an easy place to live.

“My neighbors told me there was a tent with electricity and a TV, and I came to have a look,” said Markovnikov, ogling Monday’s soccer World Cup match between Ghana and South Korea, adding he had no power at home. “We still believe. Without belief, you can’t survive.”

Ukraine’s State Emergencies Service said Friday nearly 1,000 such centers have been erected across the country since the program was first launched on Nov. 18. Its website features a handy online map to show beleaguered citizens where they are located.

As of Friday, over 67,000 people had gotten help in them — and more could pour in if, as many experts and President Volodymyr Zelenskyy have warned, more Russian strikes lie ahead.

Such centers — often consisting of small, insulated tents no larger than a classroom — were rolled out just in time as a string of massive airstrikes by Russian forces deprived many Ukrainians of basics of life at home.

The centers are in essence a stopgap while utility crews scramble to fix cut power lines and put water mains back into operation, so basic services can be restored to homes and businesses.

Power company DTEK said controlled outages continued Monday in Kyiv as a necessary step to balance the hobbled power system and avoid other breakdowns, while ensuring electricity to hospitals and heat-pumping stations.

Only 42 percent of power was available to household customers in the city, and “we do our best to provide light to each customer for 2 to 3 hours twice a day,” the company said.

Outside the “Point of Invincibility” on an esplanade in front of a sports center in Bucha, teens had a snowball fight and a guitarist strummed his instrument outside an inflatable tent.

Inside, kids crouched over games of Roblox on mobile phones as young adults tapped away at laptops and elderly women sat quietly to while away the time. A young girl clutched her dog as staffers poured cups of hot tea and sweetened it with honey.

The “Points of Invincibility” offer a public-service — and free — alternative to the many coffee shops and restaurants that have become hubs for internet access and warmth of Ukrainians seeking refuge from the cold and dark in their own homes.

“When the electricity went out, I had to look for a place with a connection," said Bucha resident Mykola Pestikov, 26, crouched over his computer. "These can be cafes that take energy from other places, or I look for a ‘point’ — like now.”

Yuri Mikhailovskiy, a firefighter who helps run the site, showed a ledger that indicated more than 1,000 people had come through the center since it was first put up 10 days ago in Bucha, where electricity is spotty or nonexistent in most homes.

A new delivery of cookies was expected in the next few days.

The video sparked discussions on social media about what kind of weapon could be responsible for the attack.
14 HOURS AGO
Business Insider

This help line is a growing effort to give Ukraine vital advice on repairs and maintenance as it pushes weapons to their limits.
WASHINGTON STATE・1 DAY AGO
msn.com

Three months after it got wrecked trying and failing to punch through Ukrainian defenses, the Russian navy’s unhappiest marine brigade is back in action. And apparently getting beaten, again. The bewildering and tragic plight of the 155th Marine Brigade is a reminder of one of the fundamental flaws in...
1 DAY AGO
CBS News

Bakhmut, eastern Ukraine — The city of Bakhmut was home to around 70,000 people before it found itself on the front line of Russian President Vladimir Putin's unprovoked war to seize Ukrainian territory. Almost 12 months of war have left Bakhmut barely recognizable.          Once renowned for sparkling wine, the small city has been reduced to a hollowed-out shell of its former self. But Bakhmut, and the Ukrainian forces defending it, have hung on. "Bakhmut holds" has even become a battle cry for the nation as it fights back against the Russian invaders. But it's only just holding...
18 HOURS AGO
San Diego Union-Tribune

"The girls from Ukraine and Switzerland simply ran from me like fire," Anna Linnikova told Evening Moscow.
LOUISIANA STATE・15 HOURS AGO
Benzinga

Over a dozen letters exchanged between former U.S. President Donald Trump and North Korean leader Kim Jong Un have been published by the Korean-American Club. What Happened: Trump’s self-described 'love letters' from Kim were retrieved by the authorities from his Mar-a-Lago residence in Florida. In the letter, Kim reportedly expressed his willingness to discuss his isolated country’s denuclearization with Trump while sidelining then-South Korean President Moon Jae In, reported Star And Stripes.
FLORIDA STATE・3 DAYS AGO
San Diego Union-Tribune

The cruise line presented Direct Relief with a check in San Diego after a monthslong fundraising campaign in which passengers participated in onboard walks to raise money for medical supplies.
SAN DIEGO, CA・6 HOURS AGO
San Diego Union-Tribune

U.S. officials say four key suspects in the killing of Haitian President Jovenel Moïse have been transferred to the United States for prosecution as the case stagnates in Haiti amid death threats that have spooked local judges
7 HOURS AGO
San Diego Union-Tribune

Name it, act on it, sanction it
1 DAY AGO
San Diego Union-Tribune