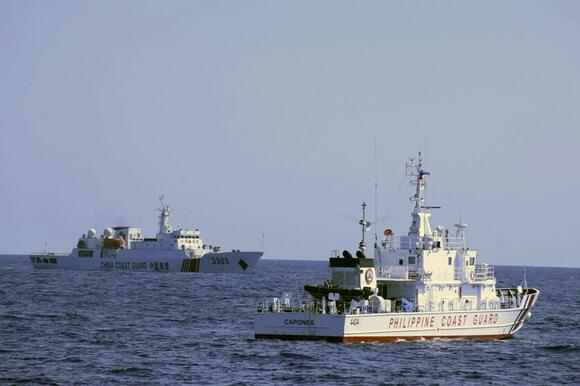 The U.S. Navy on Tuesday dismissed Beijing’s protests over a "freedom of navigation operation” conducted near a Chinese-held island in the South China Sea, in the latest incident drawing new attention to one of the world's potential military flashpoints.

In an unusual move, the Navy’s 7th Fleet issued a rebuttal to China’s objections to Tuesday’s mission, calling it “the latest in a long string of (Chinese) actions to misrepresent lawful U.S. maritime operations and assert its excessive and illegitimate maritime claims” in the South China Sea. China claims the area virtually in its entirety.

The Navy said that China's sweeping maritime claims pose a serious threat to the freedom of navigation and overflight, free trade and unimpeded commerce, and freedom of economic opportunity for South China Sea littoral nations.

“As long as some countries continue to claim and assert limits on rights that exceed their authority under international law, the United States will continue to defend the rights and freedoms of the sea guaranteed to all," it said.

The Navy said its guided missile cruiser USS Chancelorsville on Tuesday “asserted navigational rights and freedoms in the South China Sea near the Spratly Islands, consistent with international law.”

China called the action illegal and said it mobilized naval and air asserts to issue warnings and drive off the ship.

“The U.S. military's actions have seriously violated China’s sovereignty and security, which is further ironclad evidence of its pursuit of navigational hegemony and militarization of the South China Sea," spokesperson for the Southern Theater Command, Air Force Col. Tian Junli, was quoted as saying.

“China has indisputable sovereignty over the South China Sea islands and their adjacent waters," Tian said.

The long-seething South China Sea territorial conflicts involving China, the Philippines, Vietnam, Malaysia, Taiwan and Brunei have long been regarded as a delicate fault line in the U.S.-China rivalry in the region.

While the U.S. lays no claims to the strategic waterway, where an estimated $5 trillion in global trade transits each year, it has said that freedom of navigation and overflight is in America’s national interest. The sea is also home to rich fishing stocks and a potential wealth of energy and mineral resources.

In March, U.S. Indo-Pacific commander Adm. John C. Aquilino told The Associated Press that China has fully militarized at least three of several islands it built in the disputed waters with anti-ship and anti-aircraft missile systems, laser and jamming equipment. He described it as an increasingly aggressive move that threatens all nations operating nearby.

Then in July, U.S. Secretary of State Antony Blinken called on China to comply with a 2016 arbitration ruling that invalidated Beijing’s vast claims on historical grounds in the South China Sea.

On a visit to the area earlier this month, U.S. Vice President Kamala Harris reaffirmed Washington’s commitment to defend the Philippines under the 1951 Mutual Defense Treaty. She also announced an additional aid of $7.5 million to Philippine maritime law enforcement agencies.

That came shortly after the Philippine navy alleged a Chinese coast guard vessel had forcibly seized Chinese rocket debris as Filipino sailors were towing it to their island.

In a recent speech, President Joe Biden stated that he had added more to the national debt of the United States than any other president in history, saying, "No President added more to the debt in 4 years than my President… I misspoke - 25% of our country’s entire debt."
2 DAYS AGO
Newsweek

The video sparked discussions on social media about what kind of weapon could be responsible for the attack.
9 HOURS AGO
Business Insider

This help line is a growing effort to give Ukraine vital advice on repairs and maintenance as it pushes weapons to their limits.
WASHINGTON STATE・1 DAY AGO
msn.com

Three months after it got wrecked trying and failing to punch through Ukrainian defenses, the Russian navy’s unhappiest marine brigade is back in action. And apparently getting beaten, again. The bewildering and tragic plight of the 155th Marine Brigade is a reminder of one of the fundamental flaws in...
1 DAY AGO
CBS News

Bakhmut, eastern Ukraine — The city of Bakhmut was home to around 70,000 people before it found itself on the front line of Russian President Vladimir Putin's unprovoked war to seize Ukrainian territory. Almost 12 months of war have left Bakhmut barely recognizable.          Once renowned for sparkling wine, the small city has been reduced to a hollowed-out shell of its former self. But Bakhmut, and the Ukrainian forces defending it, have hung on. "Bakhmut holds" has even become a battle cry for the nation as it fights back against the Russian invaders. But it's only just holding...
13 HOURS AGO
Newsweek

"There is no other way to talk to these fools," State Duma member and former military commander Andrey Gurulyov said.
1 DAY AGO
San Diego Union-Tribune

The independent U.N. special investigator on Myanmar is warning that the country's military rulers plan to seek legitimacy by orchestrating a "sham" election this year and is urging all countries to reject the illegal vote
3 HOURS AGO
San Diego Union-Tribune

A former Guatemalan police chief has been found guilty of lying on his U.S. immigration papers about a prior conviction for killing two political activists in his country
FONTANA, CA・1 DAY AGO
San Diego Union-Tribune

U.S. officials say four key suspects in the killing of Haitian President Jovenel Moïse have been transferred to the United States for prosecution as the case stagnates in Haiti amid death threats that have spooked local judges
2 HOURS AGO
San Diego Union-Tribune

Lawmakers aim to raise penalties for US airline disruptions

Almost a decade after a tragedy that many thought would reshape the European Union's approach to migration, little of substance has changed
18 HOURS AGO
San Diego Union-Tribune

How will life change once the COVID-19 emergency ends?

General Motors has conditionally agreed to invest $650 million in Lithium Americas in a deal that will give GM exclusive access to the first phase of a mine planned near the Nevada-Oregon line with the largest known source of lithium in the U.S. The equity investment the companies announced jointly Tuesday is contingent on the project clearing the final environmental and legal challenges it faces in federal court in Reno, where conservationists and tribes are suing to block it
NEVADA STATE・3 HOURS AGO