Sabres struck down by Lightning in overtime 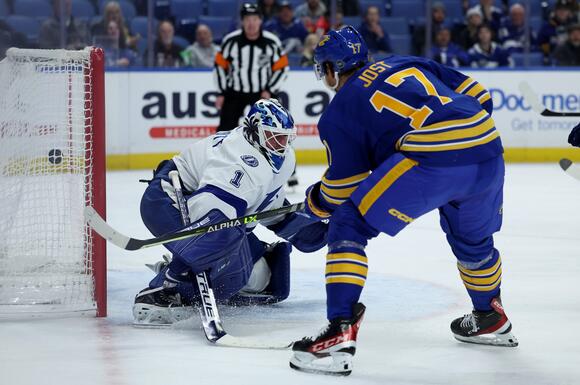 Buffalo, N.Y. (WGR 550) - The Tampa Bay Lightning come back from a late two-goal deficit against the Buffalo Sabres to force overtime, and eventually win it 6-5 at KeyBank Center. Steven Stamkos nets the game-winner for the Lightning in the high scoring affair.

Buffalo got an early chance on the power play as Cole Koepke headed to the box for tripping, but the man advantage was negated when the Sabres were charged with too many men on the ice.

The Lightning scored on the ensuing power play, as Brayden Point crashed the net and snuck the puck past Sabres goalie Ukko-Pekka Luukkonen just 7:54 into the first period.

Corey Perry then extended the Lightning lead to 2-0, as Stamkos set him up on a nice pass across the goal crease.

The Sabres would strike back late in the first period, as Tage Thompson got Buffalo on the board with some fancy stick handling in front for his 14th goal of the season.

Less than one minute later, the Sabres tied the hockey game at 2-2 thanks to Jack Quinn's fourth goal of the campaign.

After a scoreless first 10 minutes of the second period, Tyson Jost ended up giving Buffalo its first lead of the night, 3-2. For Jost, it was his first goal of the season and first tally as a member of the Sabres.

Tampa Bay went back to the power play with Mattias Samuelsson taking a high sticking penalty, and it resulted in another goal for Point with the man advantage. His goal tied the game at 3-3 heading to the second intermission.

Dylan Cozens ended up breaking the tie 9:37 into the third period, snapping a shot top corner over Brian Elliott's glove to give the Sabres the 4-3 lead.

Minutes later, Jeff Skinner extended the Sabres' lead to 5-3 with a beautifully roofed shot from a tough angle.

Tampa Bay would not go quietly, though, as Stamkos made it a one-goal game again just 14 seconds later.

Then just minutes later on another power play, with Jost was in the box for hooking, Brandon Hagel tied the game at 5-5, as a shot from Nikita Kucherov ended up going off his shin pad and past Luukkonen.

In overtime, the Sabres had multiple chances to win the game, but it was Stamkos scoring the game-winner, completing the comeback win, 6-5.

Overtime:
BUF: NONE
TBL: NONE

The blue and gold head to Detroit to take on the Red Wings on Wednesday night at Little Caesars Arena. Catch all of the action on the flagship home of the Sabres Radio Network - WGR Sports Radio 550 - starting with pregame coverage at 6 p.m. EST with Mike Schopp and the Bulldog. Puck drop set for 7 p.m. EST.

The Atlantic Division finally has a defenseman on its roster for the NHL All-Star Game, as Rasmus Dahlin has been named to replace the injured Tage Thompson. Paul Hamilton has more:
BUFFALO, NY・2 DAYS AGO
WGR550

The Buffalo Sabres continued to roll through a tough stretch of games at the end of January and won some important points on a long Mid-Western road-trip.
BUFFALO, NY・2 DAYS AGO
WGR550

Not much was expected from Rasmus Dahlin when he took Tage Thompson’s place in the “Hardest Shot” competition at the NHL All-Star Skills Challenge. Dahlin surprised everybody by ripping a bomb at 102.3 miles-per-hour. Paul Hamilton has more:
BUFFALO, NY・21 HOURS AGO