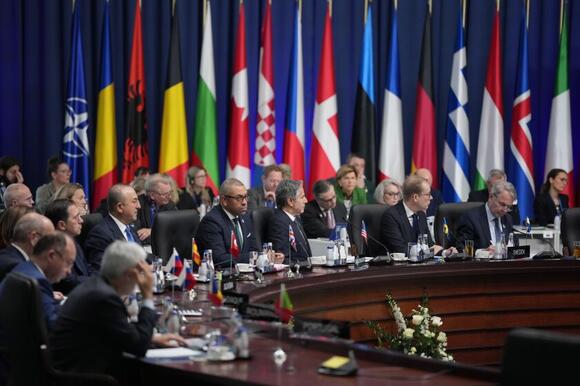 NATO doubled down Tuesday on its commitment to one day include Ukraine, a pledge that some officials and analysts believe helped prompt Russia's invasion this year. The world’s largest security alliance also pledged to send more aid to Ukrainian forces locked in battle with Russian troops.

He highlighted that North Macedonia and Montenegro had recently joined NATO, and said Russian President Vladimir Putin “will get Finland and Sweden as NATO members” soon. The Nordic neighbors applied for membership in April, concerned that Russia might target them next.

“Russia does not have a veto” on countries joining, Stoltenberg said. “We stand by that, too, on membership for Ukraine."

When they met in Bucharest in 2008, NATO leaders said Ukraine and Georgia would join the alliance one day.

Some officials and analysts believe that declaration — pressed on the NATO allies by former U.S. President George W. Bush — was partly responsible for the war that Russia launched on Ukraine in February. In justifying his invasion on Feb. 24, Putin cited threats to Russia’s security from Ukraine's ambitions to join NATO.

Stoltenberg said NATO expansion would not be hindered.

“President Putin cannot deny sovereign nations to make their own sovereign decisions that are not a threat to Russia,” the former Norwegian prime minister said. “I think what he’s afraid of is democracy and freedom, and that’s the main challenge for him.”

Ukraine applied for “accelerated accession” to NATO on Sept. 30 but will not join anytime soon.. With the Crimean Peninsula annexed, and Russian troops and pro-Moscow separatists holding parts of the south and east, it’s not clear what Ukraine’s borders would even look like.

Many of NATO’s 30 members believe the focus now must solely be on defeating Russia, and Stoltenberg stressed that any attempt to move ahead on membership could divide them.

“We are in the midst of a war and therefore we should do nothing that can undermine the unity of allies to provide military, humanitarian, financial support to Ukraine, because we must prevent President Putin from winning,” he said.

Beyond Ukraine's immediate needs, NATO wants to see how it can help the country longer-term, by upgrading its Soviet-era equipment to the alliance's modern standards and providing more military training.

Slovak Foreign Minister Rastislav Kacer said the allies must help Ukraine so "the transition to full membership will be very smooth and easy” once both NATO and Kyiv are ready for accession talks.

In a statement, the ministers vowed to help Ukraine rebuild once the war is over, saying: "we will continue to strengthen our partnership with Ukraine as it advances its Euro-Atlantic aspirations.”

Ukraine, for its part, called for more supplies of weapons to defend itself with, and quickly.

“Faster, faster and faster,” Foreign Minister Dmytro Kuleba said. “We appreciate what has been done, but the war goes on.”

“In a nutshell," he said, "Patriots and transformers is what Ukraine needs the most.” Stoltenberg confirmed that deliveries of such sophisticated missile systems are under consideration.

The U.S. is open to providing Patriots, said a senior U.S. defense official who briefed Pentagon reporters on Tuesday, speaking on condition of anonymity. While Ukraine has asked for the system for months, the U.S. and it allies have been hesitant to provide it to avoid further provoking Russia.

German Chancellor Olaf Scholz said Tuesday that his country's offer to send Patriot surface-to-air missile systems to Poland remains on the table, despite Warsaw’s suggestion that they should go to Ukraine instead.

Dmitry Medvedev, deputy chairman of the Russian Security Council, said Tuesday on his Telegram channel: “If, as Stoltenberg hinted, NATO supplies the Kyiv fanatics with Patriot complexes along with NATO personnel, they will immediately become a legitimate target of our armed forces. I hope the Atlantic impotents understand this.”

At the Romania meeting, ministers made pledges of military support for Ukraine, others for financial and nonlethal aid.

The U.S. announced $53 million to buy electrical parts for Ukraine’s electrical grid. The network has been battered countrywide since early October by targeted Russian strikes, in what U.S. officials call a Russian campaign to weaponize the coming winter cold.

Estonia’s foreign minister, Urmas Reinsalu, went a step further than most, calling on his NATO partners to pledge 1% of their GDP to Ukraine in military support, saying it would make “a strategic difference.”

Most NATO allies, however, are struggling to spend 2% of GDP on their own defense budgets.

The foreign ministers of NATO candidates Finland and Sweden are joining the talks. NATO is eager to add the two Nordic nations to the defensive forces lined up against Russia. Turkey and Hungary are the holdouts on ratifying their applications. The 28 other member nations have already done so.

Tara Copp in Washington and Andrew Katell in New York contributed to this report.

Follow AP’s coverage of the war in Ukraine: https://apnews.com/hub/russia-ukraine

This help line is a growing effort to give Ukraine vital advice on repairs and maintenance as it pushes weapons to their limits.
WASHINGTON STATE・15 HOURS AGO
Benzinga

A top Russian diplomat warned the U.S. in July 2022 against proceeding with efforts to bring the country before an international war court. 'Wrath Of God:' Dmitry Medvedev, the deputy secretary of Russia's Security Council, said the U.S. may have to face the "wrath of God" if it helps set up an international tribunal to investigate Russia's action in Ukraine, the Associated Press reported.
1 DAY AGO
Business Insider

"He is obsessed with retaking Ukraine," former Secretary Gates said of Putin, who launched the war in Ukraine last February. "He will hang in there."
1 DAY AGO
Business Insider

Fox News host Tucker Carlson compared Justin Trudeau to Fidel Castro and said he was "completely in favor of a Bay of Pigs operation" in Canada.
1 DAY AGO
Business Insider

There has been substantial media coverage of President Biden and former Vice President Pence both removing marked classified documents outside the White House after they left the vice presidency (and, in the case of Biden, also including after he was a U.S. senator). Both insist they did so inadvertently.   Of course, the word “inadvertent” does not apply to former President Trump’s behavior. As we now know from Mr. Trump’s own admission, he knew documents he took to Mar-a-Lago were classified…
WASHINGTON STATE・11 HOURS AGO
Business Insider

Graham said on Saturday that there are "many, many talented people" in the GOP, but there is "only one Donald Trump."
SOUTH CAROLINA STATE・22 HOURS AGO
NBC News

SRINAGAR, India — Weapons left behind by U.S. forces during the withdrawal from Afghanistan are surfacing in another conflict, further arming militants in the disputed South Asian region of Kashmir in what experts say could be just the start of the weapons’ global journey. Authorities in Indian-controlled Kashmir...
WASHINGTON STATE・21 HOURS AGO
Newsweek

"There is no other way to talk to these fools," State Duma member and former military commander Andrey Gurulyov said.
12 HOURS AGO
Newsweek

The GOP lawmaker recently urged Democrats to join Republicans in a newly formed subcommittee tasked to investigate the "weaponization" of the federal agencies.
OHIO STATE・1 DAY AGO
San Diego Union-Tribune

A group of House Democrats is urging the Biden administration to suspend all U.S. security assistance to Peru
PENNSYLVANIA STATE・8 HOURS AGO
San Diego Union-Tribune

The U.N. humanitarian chief is warning that the Taliban's ban on women aid workers in Afghanistan is "a potential death blow" to many important humanitarian programs
8 HOURS AGO
San Diego Union-Tribune

Chinese police have prevented a woman from returning to her home in Florida in an effort to compel her husband to return to China, she wrote in a letter he made public
FLORIDA STATE・54 MINUTES AGO
San Diego Union-Tribune

Excerpts from recent editorials in the United States and abroad: Jan. 29 The Washington Post on violent policing No decent citizen could fail to be appalled by the video, released Friday, showing Memphis police officers beating a 29-year-old Black man, Tyre Nichols, so badly on Jan. 7 that he died three days later.
MEMPHIS, TN・8 HOURS AGO
San Diego Union-Tribune

IMF upgrades outlook for the global economy in 2023

The outlook for the global economy is growing slightly brighter as China eases its zero-COVID policies and the world shows surprising resilience in the face of high inflation, elevated interest rates and Russia's ongoing war against Ukraine
3 HOURS AGO