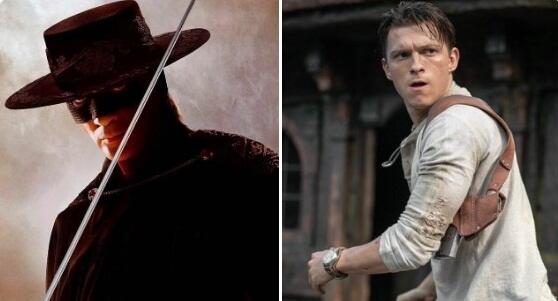 The 62-year-old star portrayed the masked vigilante in the 1998 movie 'The Mask of Zorro' and the 2005 sequel 'The Legend of Zorro', and believed that his 'Uncharted' co-star Holland would be the ideal actor to take his place as the character.

"I did 'Uncharted' with him, and he's so energetic and fun, and he's got this spark too. Why not?" Antonio said to ComicBook.com. Read More

On yesterday's episode of 'Live with Kelly and Ryan,' morning show host Kelly Ripa recounted the time her daughter, Lola Consuelos, walked into her and her husband's room and was surprised by what she found.
1 DAY AGO
RadarOnline

Jim Carrey is leaving behind the 12,704-square-foot place he used to call home, RadarOnline.com can confirm, listing his Los Angeles mansion for nearly $29 million as he welcomes life "changes."The sprawling five-bedroom and 7.5-bathroom property he listed boasts endless gorgeous views as it is set behind more than 280 feet of hedged frontage, located in the heart of Brentwood.Carey's longtime abode comes with a large courtyard patio and a chef's kitchen featuring bar seating, ample cabinetry, and top-of-the-line stainless steel appliances, all balanced by natural light thanks to its numerous windows.The listing details its contemporary interiors, including beamed ceilings with...
LOS ANGELES, CA・1 DAY AGO
Fox News

Woman picks up Hitchhiker who turned out to be an angel, what he said was shocking.

Linda Markowitz tells her story about picking up a man on the side of the road who turned out to be an angel.And what this man said and did was pretty shocking, and the events that followed will make you really question why he was even there.
1 DAY AGO
thesource.com

Despite what Offset says, it appears something did happen backstage between him and Quavo. A new video from Entertainment Tonight captured Cardi B yelling at two unidentified people. “Both of y’all wrong! Both of y’all! This is not right!” Cardi said. “No b*tch, shut the f*ck up ’cause you shouldn’t...
1 DAY AGO
News Breaking LIVE

Hollywood is mourning the loss of one of its own this week after news broke that legendary Oscar and Tony Award-nominated actress Melinda Dillon has died at the age of 83. Dillon reportedly died in the beginning of the year, but news of her death was not announced until recently.
1 DAY AGO
musictimes.com

Madonna graced the 2023 Grammy Awards stage on Sunday to present another singer's performance. However, she quickly shared a speech to the crowd and those watching from home. The "Material Girl" singer told everybody, "I'm here to give thanks to all the rebels out there, forging a new path and taking the heat for all of it."
2 DAYS AGO
The US Sun

AMERICA'S Got Talent magician Scott Alexander has died after suffering a stroke while working on a cruise ship. Scott's wife Jenny, who appeared on the reality TV show as his assistant, took to Instagram on Monday and informed fans about her husband's sudden death at the age of 52. Alongside...
PENNSYLVANIA STATE・1 DAY AGO