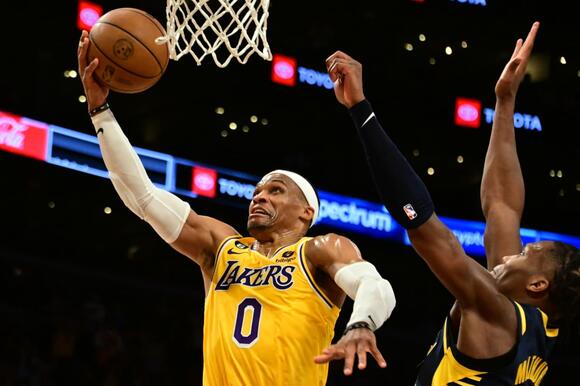 Well that was brutal.

Your Los Angeles Lakers seemed to be pretty much steering the ship for most of the night as they hosted the Indiana Pacers following a three-game road stint.

Unfortunately, L.A. got a little too comfortable, and despite a seventh straight 20-10 game from Anthony Davis they punted away a significant fourth quarter lead to eventually lose by a single point on a buzzer-beater three from rookie reserve Andrew Nembhard.

Let's unpack this unhappy turn of events, during Chick Hearn Night no less.

The Lakers started off with a high-scoring first quarter effort. LeBron James played what has become a somewhat standard Old LeBron game, generating most of his early offense on jumpers away from the paint. Anthony Davis-as-center remained as formidable as ever, check out this exquisite block on a driving Aaron Nesmith:

The two teams exchanged buckets through most of the second quarter. AD again was the star of the show, proving to be a bit of a Block Machine tonight.

L.A. got some more significant separation in the third quarter, thanks in large part to a 19-9 run midway through the frame. In a spooky preview of things to come, the Lakers let their collective (and figurative) foot off the gas late, and, after leading by as much as 14 points, let the Pacers crawl within double digits on an 8-1 run during the third period's final 1:12.

The fourth quarter began well, as the Lakers quickly went on a blitzing 8-0 tear to get up to a seemingly commanding 101-84 lead with 9:59 remaining in the period.

Russell Westbrook, wearing a headband tonight for a look that the Lakers' Twitter account called "Headband Brodie," was a big part of that run, electrifying the Crypto.com crowd with moments like this:

After that 17-point lead, however, everything went south pretty quickly for the Lakers. The Pacers nailed a quick triple, and Darvin Ham opted to remove Russell Westbrook with the lead still 101-87. The Pacers instantly went on a 7-0 run. Ultimately, Indiana outscored L.A. 32-14 the rest of the way.

The game would be clinched at the last possible second, after several relatively fruitless Lakers possessions (with Westbrook holding onto the ball way too long, and James forcing up jumpers) let the Pacers right back into the contest.

Indiana had the ball in the game's closing seconds with plenty of time to spare, and the Lakers played defense like chickens running around with their heads cut off.

Let's look at this from another angle. This is a massive, massive mistake. All five Lakers careened to one side of the floor (with Westbrook around the nail), leaving Nembhard wide open on the weak side. Prior to that shot, the rookie had made three of his triple attempts on the night. So... maybe somebody should have rotated out sooner (James did try to close out, but it was way, way too late). Just a thought.

Note how crushed these home fans are. Perhaps they realize that this defeat represents a completely blown opportunity, the Lakers could have nabbed one of their more impressive victories of the season against a solid young team within the friendly confines of Crypto.com Arena. Instead, the game slipped through their fingers, and they slipped to a pretty unimpressive 7-12 record.

Davis finished with 25 points on an efficient 9-of-15 shooting, as well as 13 rebounds, six assists, and four blocks. He has now become clearly the team's best option, and it is a crime that he is getting fewer touches than both James and Westbrook.

James lingered outside way too much, taking a whopping ten triple attempts and making just three of them. He finished with 21 points on 8-of-22 shooting (a terrible 36.4%), seven rebounds, three assists and a steal.

Westbrook had what on paper looked like a decent game, with 24 points on 10-of-18 shooting, six impressive assists (albeit against six turnovers), four rebounds, a steal and a block. But that doesn't tell the whole story. Late in the fourth quarter, L.A.'s veteran sixth man made costly mistakes with the ball in his hands during crucial possessions. He held onto the rock far too long, and tried to do too much, forcing up awkward jumpers instead of passing to James or Davis.

LeBron James is being attacked for the way he responded to the video beatdown of Memphis motorist Tyre Nichols on Jan. 7, 2023,. The 29-year-old Black male was beaten to a pulp on the streets of Memphis, Tennessee, following a traffic stop for allegedly driving recklessly, though that was never established by the responding officers.
MEMPHIS, TN・1 DAY AGO
AllLakers

Will he keep the pressure on the team president to keep making moves?
LOS ANGELES, CA・23 HOURS AGO
AllLakers

That great's jersey is retired in LA, so he had to pivot.
LOS ANGELES, CA・15 HOURS AGO
AllLakers

Any level of veteran leadership is welcome.
LOS ANGELES, CA・17 HOURS AGO
AllLakers

The two players were previously teammates with the Washington Wizards.
LOS ANGELES, CA・1 DAY AGO
AllLakers

There's almost no chance this will happen, though.
LOS ANGELES, CA・2 DAYS AGO
AllLakers

The 2020 champ would look good back in the purple and gold.
LOS ANGELES, CA・2 DAYS AGO
AllLakers

The Lakers may look for a cheaper option that can provide immediate help.
LOS ANGELES, CA・1 DAY AGO
AllLakers

Lakers Injury News: Nets, LA To Be Without Two Stars Each On Monday

LA will lean on role players to step up.
LOS ANGELES, CA・12 HOURS AGO
AllLakers

The Lakers are shorthanded on Monday.
LOS ANGELES, CA・13 HOURS AGO
AllLakers

All Lakers Expert Predictions Ahead Of Monday's Nets Matchup

Both teams are without critical pieces.
LOS ANGELES, CA・14 HOURS AGO
AllLakers

Things have been dicey for LA of late.
LOS ANGELES, CA・1 DAY AGO
AllLakers

Lakers Injury Report: Ailments To Both Sides Mounting Ahead Of Nets Game