US has clear task: Win or go home 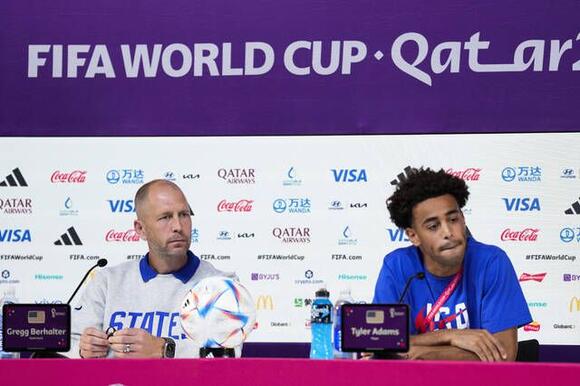 head coach Gregg Berhalter of the United States and Tyler Adams attend a press conference on the eve of the group B World Cup soccer match between Iran and the United States in Doha, Qatar, Monday, Nov. 28, 2022. (AP Photo/Ashley Landis)

DOHA, Qatar — The task is clear for the United States: beat Iran in a politically charged World Cup match or go home.

“We have to get out of our group by all means,” U.S. captain Tyler Adams said Monday. “It would feel like a success for us when we make it out of the group and then continue on in the tournament.”

A draw or a loss Tuesday night would eliminate the Americans, who tied Wales 1-1 and England 0-0. England leads Group B with four points, followed by Iran with three, the U.S. with two and Wales with one.

During unusual pre-match news conferences, Adams was asked to defend the U.S.’s treatment of Black people and chastized for pronoucing the opponent “Eye-ran” instead of “E-ran.” American coach Gregg Berhalter was questioned about U.S. immigration and Naval policy and apologized for the U.S. Soccer Federation’s decision to strip the emblem of the Islamic Republic from Iran’s flag on social media.

The USSF’s flag decision was meant to support women protestors in Iran.

“We had no idea about what U.S. Soccer put out,” Berhalter said. “All we can do on our behalf is apologize on behalf of the players and the staff.”

Iran coach Carlos Queiroz was queried about Sunday’s flag flap, which prompted the governing body of Iranian soccer to demand FIFA expel the U.S. from the tournament. He said he did not intend to use the controversy as motivation.

“If after 42 years in this game as a coach I still believe that I could win games with those mental games, I think I did not learn nothing about the game,” he said.

“We have solidarity with the humanitarian causes all over the world, whatever they are or who they are,” he added. “If you talk about human rights, racism, kids that die in schools with shootings, we have solidarity to all those causes, but here our mission is bring the smiles for the people at least for 90 minutes.”

Adams, who is Black and grew up in a white family, was told by a reporter from Iran’s Press TV about the pronounciation of Iran, then asked: “Are you OK to be representing a country that has so much discrimination against Black people?”

“My apologies on the mispronunciation of your country,” Adams responded. “That being said, there’s discrimination everywhere you go. One thing that I’ve learned, especially from living abroad in the past years and having to fit in in different cultures and kind of assimilating to different cultures, is that in the U.S. we’re continuing to make progress every single day.”

Iran famously beat the U.S. 2-1 in a 1998 World Cup match in France that eliminated the Americans.

Iran rebounded from a 6-2 opening match loss to England with a 2-0 upset of Wales, putting the team in position to advance for the first time in six World Cups.

Queiroz praised growth in the U.S. team, saying this World Cup showed “they jumped from soccer to football.”

He coached Major League Soccer’s MetroStars in 1996 and served as a USSF adviser in 1998, writing a player development blueprint aimed at winning a World Cup by 2010.

“When it was time to dress, (there) was a box of in front of us, (Roberto) Donadoni and Tab Ramos, we need to jump on the boxes to choose the best socks and the best trousers and the best shirt because everything was in one pile,” Queiroz said. “I’m sure that these Americans that play tomorrow, they don’t know nothing about that.”

WASHINGTON — The U.S. is tracking a suspected Chinese surveillance balloon that has been spotted over U.S. airspace for a couple days, but the Pentagon decided not to shoot it down over concerns of hurting people on the ground, officials said Thursday. The discovery of the balloon puts a further strain on U.S.-China relations at a time of heightened tensions.
MONTANA STATE・2 DAYS AGO
Times Leader

KYIV, Ukraine — The European Union will unveil its 10th package of sanctions against Russia on Feb. 24 to mark the anniversary of Moscow’s full-scale invasion of Ukraine, a senior official from the bloc said in Kyiv on Friday, as Ukrainian forces gird for an expected Russian offensive in the coming weeks.
1 DAY AGO
Times Leader

KYIV, Ukraine — Ukraine won support Tuesday from Baltic nations and Poland in its quest to obtain Western fighter jets, but there were n
3 DAYS AGO
Times Leader

KYIV, Ukraine (AP) — Fighting remained largely deadlocked Monday in eastern Ukraine where Russian shelling killed five civilians over the past day, according to Ukrainian officials, as the warring sides sized up their needs for renewed military pushes expected in coming weeks. The casualties included a woman who was...
5 DAYS AGO
Times Leader

Along Ukraine-Belarus border, a war of nerves — and drones

BELARUS BORDER, Ukraine — The reconnaissance drones fly several times a day from Ukrainian positions deep inside the thick forest that marches across the border into Belarus, a close Russian ally, scouring sky and land for signs of trouble on the other side. Ukrainian units are monitoring the 1,000-kilometer...
1 DAY AGO
Times Leader

WASHINGTON — For nearly a year, the Federal Reserve has been on a mission to cool down the job market to help curb the nation’s worst inflation bout in four decades. The job market hasn’t been cooperating. Consider what happened in January: The government said Friday that...
COLORADO STATE・1 DAY AGO