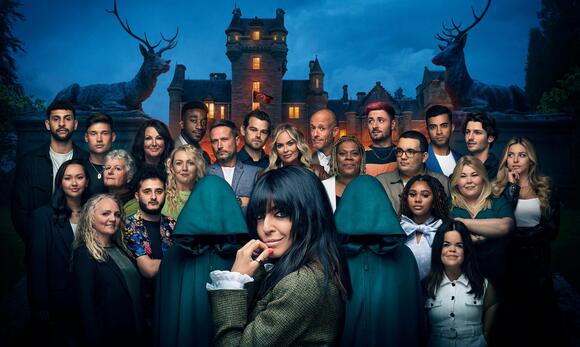 Prepare to see Claudia Winkleman in a whole new light. The Strictly host is cut-throat and conniving as she invites 22 strangers to stay at a castle in the Highlands of Scotland – and sets them the task of working out who the traitor is, while playing them off against each other. A magician, an actor and a receptionist are just a few of the guests hungry to win the £120,000 prize. With plenty of shock twists as they complete tasks, it’s like Agatha Christie meets Cluedo meets Big Brother. Hollie Richardson

Banter ahoy, as Messrs Flintoff and Manford travel to Snowdonia National Park for an extreme camping trip. But don’t expect any Bear Grylls-style survival hints – as they attempt abseiling, precarious cliffside camping and various other outdoor challenges, this pair of good-natured novices are winging it all the way. Phil Harrison

Miriam and Alan: Lost in Scotland and Beyond

Alan’s pet pooch Lala attends a dog spa and healing centre in LA (of course), and Miriam grills Alan’s former fiancee Saffron Burrows on her private life (of course she does). Meanwhile, our hosts are conjoined in a “friendship marriage” in Vegas, courtesy of a Dolly Parton priest (of course they are) in this series finale. Perfect telly, really. Ali Catterall

Theroux wraps up the series by shadowing the pop star and tabloid fave on her globetrotting schedule. Visits to Albania and LA look like fun but it is only when the pair have some quiet time in the UK that Ora really opens up about her closest relationships, press intrusion and Prince’s ping-pong prowess. Graeme Virtue

Drag Race stars Bob the Drag Queen, Eureka O’Hara and Shangela start their state-hopping adventure in Jackson, Mississippi, to recruit locals for a one-night-only drag show. But tonight’s episode takes a sad turn when anti-LGBTQ+ protesters confront the crew and call them an “abomination”. An awful but common occurrence. Sammy Gecsoyler

Keeping his promise not to write about what he witnessed last week, reporter Jake (Ansel Elgort) seeks an alliance with detective Hiroto Katagiri (Ken Watanabe). But with such access to Tokyo’s underworld comes dangerous suspicions about him from those within it. HR

Group B reaches a conclusion in Qatar. Iran also play USA at 6.45pm on BBC Two.

1 Which animals returned to Devon’s River Otter in 2013?. 2 The Chandrasekhar limit relates to the mass of what?. 3 Which Nina Simone song was a tribute to the writer Lorraine Hansberry?. 4 Which eighth-century dynasty ruled territory from the Pyrenees to Punjab?. 5 On Mumsnet, what does...
PENNSYLVANIA STATE・3 HOURS AGO
The Guardian

Meet the residents of a hard up community that shared a windfall. Plus: the story of hip-hop continues. Here’s what to watch this evening
4 HOURS AGO
The Guardian

After repeating ‘fake news’ about Hasna Aït Boulahcen’s role in the Paris attacks, Dina Amer switched from journalism to directing – to uncover deeper truths about this tragic misfit
2 DAYS AGO
Fox News

In the clear sky over the winter-yellowed marsh grasses on the outskirts of the town of Huliaipole, the bang and crump of artillery picked up pace like the thunderclaps of a distant but approaching storm. The Russian armed forces declared on Sunday that they had launched a new offensive in...
22 HOURS AGO
The Guardian

Conservative and far-right Spanish political leaders have been accused of seeking to smear and stigmatise Muslims and migrants after a suspected Islamist terrorist attack on two churches in the southern city of Algeciras in which one man was killed and four other people were injured. On Wednesday evening, a man...
20 HOURS AGO
The Guardian

A combination of healthy lifestyle choices such as eating well, regularly exercising, playing cards and socialising at least twice a week may help slow the rate of memory decline and reduce the risk of dementia, a decade-long study suggests. Memory is a fundamental function of daily life that continuously declines...
2 DAYS AGO
The Guardian

Nichols, 29, died three days after a traffic stop in Memphis turned violent. Plus, the rise of queerbaiting accusations
MEMPHIS, TN・23 HOURS AGO
The Guardian

If the German chancellor, Olaf Scholz, chose to upgrade Germany’s military assistance to Ukraine this week, it was only as a result of the extreme amount of pressure that had been building up in recent days. Russia’s full-scale invasion of Ukraine has thrust upon Germany the necessity of some...
GEORGIA STATE・1 DAY AGO