Three of Pima County's parks on the Loop vandalized 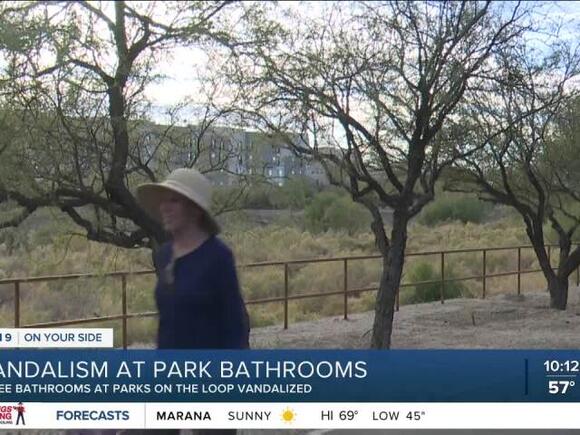 Whether you’re cycling on a bike or going for a jog, the Loop in Tucson can be a peaceful place to relax.

However, Pima County’s Natural Resources Parks and Rec Department is currently looking into vandalism at 3 of their park bathrooms on the Loop.

The parks that were affected include Rillito Racetrack, Ted Walker Park, and Camino de la Tierra.

They said vandals destroyed and stole parts of the bathrooms like the copper pipes, sloan valves and a sink.

As for security at the parks, they said they have cameras in some areas of their parks but they don’t usually aim them at bathrooms for privacy reasons.

The said the vandalism will cost about 5 thousand dollars and parts will take up to a month to come in. They said they will be welding the parts back in place.

Rillito Racetrack currently has port a potties and the other two parks’ bathrooms are closed.

Phil Sanik frequents the Loop and brings his dog. He said it’s also a great place to meet new people.

He said due to the vandalism at the parks, his family doesn’t feel as safe on the Loop.

“Especially my wife. There’s sections that she will not go on alone that in previous years she wouldn’t hesitate but now unless we’re together she won’t even go,” Sanik said.

However, others like Mark Hillmer said the vandalism isn’t affecting their experience or how often they will frequent the Loop.

“We actually even walk this thing at nighttime and we feel like it’s real safe and stuff and so, being as flat as it is, it’s about as safe as it gets,” Hillmer said.

Others like Jeanne Short feel safer using the Loop during the daytime and said she doesn’t feel any less safe during the day because of the vandalism.

“It’s not a lot during the day that’s going to scare us away from the Loop,” Short said.

——-
Andrew Christiansen is a reporter for KGUN 9 . Before joining the team, Andrew reported in Corpus Christi, Texas for KRIS6 News, Action 10 News and guest reported in Spanish for Telemundo Corpus Christi. Share your story ideas with Andrew by emailing andrew.christiansen@kgun9.com or by connecting on Facebook , or Twitter .

Sad but a lot of the restrooms on the loop are unusable due to the fact that the homeless have taken them over and the city to include the PD do nothing about it.

tell me why that the city annexed the river and the loop, but the county pays for maintenance of the loop?

On February 4, 2023, around 9:45 a.m. the Oro Valley Police Department responded to reports of a suspicious package at the Home Depot in Oro Valley.
ORO VALLEY, AZ・1 HOUR AGO
KGUN 9 Tucson News

Josue Lopez Quintana, the man who provided a key component to a gun used in a Tucson shooting last year has been sentenced to three years probation, following his guilty plea.
TUCSON, AZ・18 HOURS AGO
KGUN 9 Tucson News

Pima County was identified as one of the country’s areas with the highest traffic deaths, so it was given a grant to ensure safety.
PIMA COUNTY, AZ・2 DAYS AGO
KGUN 9 Tucson News

AAA's 'Favorite Romantic Restaurants in the West' list includes a number of reader-submitted favorites, and El Corral—known for its prime rib—made the cut.
TUCSON, AZ・2 DAYS AGO
KGUN 9 Tucson News

Neighbors who live along Mary Ann Clevelend way are asking for change after a teen girl was hit and killed by a car.
TUCSON, AZ・2 DAYS AGO
KGUN 9 Tucson News

Who was Tucson's 'Umbrella Lady'?

Dozens of Tucsonans gathered at Tohono Chul Gardens to honor and celebrate the life of Lydia Reis on Monday.
TUCSON, AZ・4 DAYS AGO
KGUN 9 Tucson News

Seven states, including Arizona, were given a deadline by the federal government to come up with a plan on how to cutback on water.
ARIZONA STATE・3 DAYS AGO
KGUN 9 Tucson News

How Tucson banks water for the future

Water is a valuable resource in the desert so the City of Tucson keeps a lot of its water in a bank.
TUCSON, AZ・3 DAYS AGO
KGUN 9 Tucson News

Ty Wells, a former University of Arizona student athlete and member of the Arizona Swimming & Diving program from 2018 to 2022, passed away Friday, Jan. 27. He was 23 years old.
TUCSON, AZ・20 HOURS AGO
KGUN 9 Tucson News

According to a report from the state's Auditor General in 2018, TUSD district was warned that it "lacked adequate controls" for a secure network.
TUCSON, AZ・1 DAY AGO
KGUN 9 Tucson News