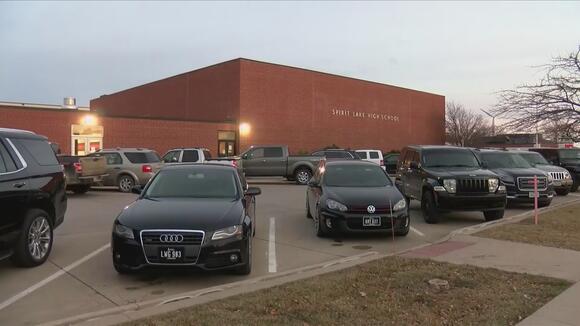 The Emergency Response Plan (EPR) was revised after the board’s approval in August and September to arm selected staff members , and on Monday, local residents shared their opinions for the first time since the local police chief came out against the plan .

The school board held Monday’s meeting to share its Emergency Response Plan with the community. Each of the 25 residents that requested to make public comment was given 2 minutes to do so.

The school district confirmed nearly 200 people expressed support for the school’s safety plan, compared to just over 100 people who opposed it. On Monday, the feedback was present. A father with kids in the district voiced his support for both the safety plan and the district.

“I want to thank the staff for all the work they’ve put into the safety plan, and I’d like to show my support in the safety plan. I think Spirit Lake schools are full of staff that have dedicated their entire lives to children,” said parent John Hight.

The feedback was collected over more than seven days. Carissa Janssen is a Special Education teacher at Spirit Lake Middle School. She said she supported the decision to arm staff members.

“I think it will. It has a little bit of a, I don’t know, not exactly a fear factor, but it kind of puts everyone into perspective that we have this under control,” said Janssen.

Community members expressed concerns about the plan however the majority defended the plan.

The board voted unanimously to approve the plan Mo n day night .

Classroom teachers and bus drivers will not have guns, armed staff can leave their gun at school or take it home with them and the school district is still considering adding an Anonymous Tip Line.

Sioux City encourages residents to sign up for CodeRED

With two major snow events in just over a week, there's a lot of white powder all around city roadways.
SIOUX CITY, IA・5 HOURS AGO
KCAU 9 News

Another arrest made in central Iowa education center shooting

A second arrest has been made in connection to the shooting at Starts Right Here that resulted in the death of two students and seriously injured the program's founder earlier this week.
SIOUX CITY, IA・3 HOURS AGO
KCAU 9 News

Hay business back at it after Jan. 11 fire in Iowa

The fire happened on the night of Jan. 11. The next day, the Rock Valley Hay Auction company in Iowa was back selling hay.
ROCK VALLEY, IA・3 DAYS AGO
KCAU 9 News

Sioux City and other Siouxland communities are declaring a snow emergency ahead of expected winter weather.
SIOUX CITY, IA・3 DAYS AGO
KCAU 9 News

What is the Great Iowa Treasure Hunt?

Did you know that there are millions of dollars in unclaimed money in the state of Iowa, and some of it could belong to you? Don’t worry, the Iowa State Treasurer's Office wants to give it back to you!
IOWA STATE・48 MINUTES AGO
KCAU 9 News

Officials say they deployed deflation spikes after a vehicle was stolen from a store in Onawa, Iowa.
ONAWA, IA・3 HOURS AGO
KCAU 9 News

Winter games are underway in Okoboji

More than 50 competitors from several states across the Midwest come to West Lake Okoboji to compete.
OKOBOJI, IA・2 DAYS AGO
KCAU 9 News

Stray of the Day: Meet Tory

A 2-to-3 year old, female, brown-and-white Bull Terrier, Tory was found as a stray on the north-side of town.
SIOUX CITY, IA・4 HOURS AGO
KCAU 9 News

Stray of the Day: Meet Light

SIOUX CITY, Iowa (KCAU) — Meet today’s Stray of the Day! This is light, a 2-to-3-year old, male, orange-and-white tabby cat. He was found abandoned on the 3500 block of 4th avenue. The shelter says he’s a mellow, laidback kind of guy who just wants a warm snuggle buddy on these cold winter days. Light […]
SIOUX CITY, IA・3 DAYS AGO
KCAU 9 News

A trial date has been set for the wife of Woodbury County Supervisor Jeremy Taylor who she was federally charged with voter fraud.
WOODBURY COUNTY, IA・2 DAYS AGO
KCAU 9 News

The Iowa Court of Appeals denied the appeal of a Sioux City man who strangled a woman then set fire to her hotel room.
SIOUX CITY, IA・3 DAYS AGO
KCAU 9 News

Watch KCAU 9 at 10 p.m. for SportsZone with Sports Director Anthony Mitchell and Sports Anchor Noah Sacco while they take you through the hardwood action throughout Siouxland.
SIOUX CITY, IA・2 DAYS AGO
KCAU 9 News

SIOUX CITY, IOWA (KCAU) – With heat on the hardwood up to boiling temperatures and the first ever girls wrestling Super Regionals in the books, the sports scene around Siouxland was full of excitement. With it, great moments to go around as we look at the best of the best in the newest edition of […]
SIOUX CITY, IA・16 HOURS AGO