It's Possible Eddie Jackson Was Part of MetLife Syndrome 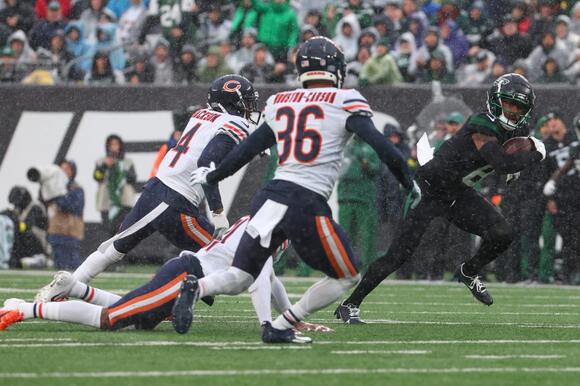 Bears safety suffered odd foot injury on artificial surface labeled one of the league's worst by the players union.

It's possible the infamous MetLife Stadium artifical turf or "slit film turf," had something to do with the foot injury Bears safety Eddie Jackson suffered in Sunday's 31-10 loss to the Jets.

It wouldn't be a surprise if this actually was the reason for his injury after the history of that artificial surface.

Former Bears cornerback Kyle Fuller had his cleat get stuck in the turf in the opener this year and suffered a torn ACL, while Baltimore teammate Ja'Wuan James suffered a torn Achilles. In 2020, Nick Bosa had his season end on that same playing surface in a game when a handful of 49ers suffered injuries.

The NFLPA has repeatedly warned about that surface and, according to Giants safety Julian Love in a story for NJ Advance Media, the field is going to be changed out for a new one.

It's going to come too late for Jackson, who went down on a 54-yard TD pass from Mike White to Garrett Wilson Sunday, one that may not have gone for a TD except for the injury.

Jackson, who leads NFC safeties in Pro Bowl voting by fans, hasn't been put on injured reserve yet but coach Matt Eberflus said his injury is being evaluated further.

The players union maintains there is a higher in-game injury rate on that field than all other surfaces but the league has denied this is their finding.

"I would say that I would let someone else worry about that," Eberflus said when asked about the field condition.

This was keeping consistent with what Eberflus said last week about the topic, but he was far from content with sitting on his statement.

"But I will say this: That the players' safety, with the NFL and our organization is very important to us," Eberflus said. "We've got to make sure that we take care of the players. And if that's adjusting surfaces throughout the league, I think that's a good idea. If it's changing the rules to make sure the players' safety is good—helmet-to-helmet contacts, blindside blocks, all the things that we've changed. I think that's always a positive. Because it's a players' game, right?

"We've got to keep good players in the game. So it keeps it exciting and we've got to be mindful of the players' safety at all times."

Ravens coach John Harbaugh said something very similar about the turf after his team's two injuries there earlier this year.

The field probably wasn't a factor in Darnell Mooney's season-ending ankle injury as it occurred when the back of his leg was rolled up by Jets safety Jordan Whitehead while blocking.

Bears safety DeAndre Houston-Carson was testing out the turf before the game in warmups and didn't like what he felt.

"I don't know all of the science and all that stuff behind turf and grass and whatnot," Houston-Carson said. "But I know that even before the game, kind of making breaks, my joints were feeling achy and I wasn't really feeling good.

"So I think they've got to do something to figure it out. I don't know what that is, but …"

The Bears were all well aware of the conditions but Houston-Carson said it didn't make him nervous about playing on it.

"I wouldn't say nervous," he said. "There have been times before a game where I'm like, 'I don't have it today,' as far as my body. I'd say at the end of the day you've got a job to do, and you've just got to.

"You know, no one cares what the surface is when they turn the tape on and evaluate you. They just want to see did you produce and did you do your job? So I wouldn't say nervous, but it's just something you've got to deal with."

Hopefully not for many more league games.

Dallas Cowboys quarterback Dak Prescott and Natalie Buffett have broken up after two years of dating, Page Six can exclusively reveal. Multiple sources confirm the longtime couple actually split around March 2022 but have kept it close to the vest. We’re also told Prescott has been casually dating. Reps for the former couple didn’t immediately return Page Six’s request for comment. The athlete, 29, and Buffett, 25, began dating sometime in 2020 based on social media photos, though it’s unclear exactly when they became official. She posted their first picture together in honor of his 27th birthday, captioning the outdoorsy shot at the...
2 DAYS AGO
The Comeback

While the Cincinnati Bengals might be enjoying the underdog role throughout their NFL playoff run this season, they won’t technically be the underdogs when they travel into Arrowhead Stadium to take on the Kansas City Chiefs in the AFC Championship game this weekend. And that’s some pretty historic news. While the Bengals did open the Read more... The post NFL world reacts to insane Chiefs, Mahomes news appeared first on The Comeback: Today’s Top Sports Stories & Reactions.
KANSAS CITY, MO・2 DAYS AGO
Boston

"I'm looking forward to getting back with Bill and working for Bill and doing what's best for the team. That's what this place is all about." It didn’t take long for the Patriots to get a message out from the team’s newly hired offensive coordinator. Bill O’Brien, whose...
ALABAMA STATE・30 MINUTES AGO
BearDigest

After an interception in the season finale, cornerback Greg Stroman will get a chance to return in the 2023 season.
CHICAGO, IL・17 HOURS AGO
BearDigest

Would Bears Really Trade Down for Weakside Linebacker?

One website says Clemson's Trenton Simpson would be ideal for the Bears after trading down in Round 1 to fill a need.
CHICAGO, IL・1 DAY AGO
BearDigest

The Good, the Bad and the Ugly of One Year Under Ryan Poles

It's the anniversary of Ryan Poles being hired as Bears GM and here's the good, the bad and the ugly of those 365 days.
CHICAGO, IL・1 DAY AGO