Another commercial flock in Nebraska infected by avian flu 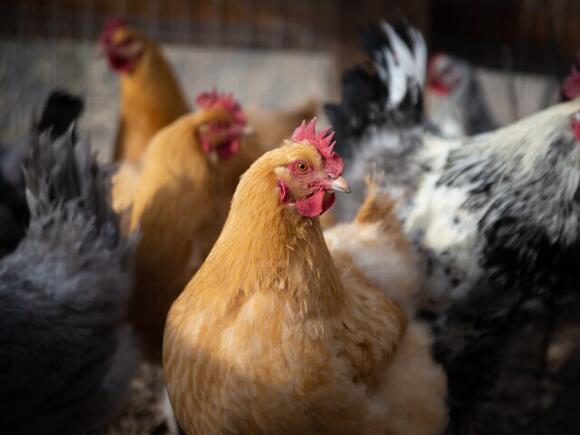 The highly contagious, lethal avian influenza has struck another commercial flock in Nebraska, the state Department of Agriculture has reported.

That increases the total number of flocks affected in Nebraska to 13 and the number of birds affected in the state to 6.76 million, including chickens, game birds and other poultry, in both commercial and backyard flocks.

HPAI, or highly pathogenic avian influenza, spreads through nasal and eye secretions, as well as manure. It can spread in different ways from flock to flock, including by wild birds, through contact with infected poultry, equipment or caretakers’ clothing and shoes.

Wild birds can carry the virus without getting sick, while domesticated birds can become very sick, state experts say.

Before this year, Nebraska hadn’t seen a confirmed HPAI case since 2015. The first wave of reports this year occurred between mid-March and April. After a quiet summer, additional cases flared up beginning in September.

According to the Centers for Disease Control and Prevention, the risk of the flu being transmitted from birds to people is low. Among the symptoms of the disease are:

Decreased water consumption.Lack of energy and appetite.Decreased egg production or soft-shelled, misshapen eggs.Nasal discharge, coughing or sneezing.Incoordination.Diarrhea.Sudden death even without other symptoms.

For more information or to report sick birds call (402) 471-2351. Early detection is vital in preventing the spread of the disease, officials said.

Cases confirmed this year by the Nebraska Department of Agriculture:

Questions revived about whether Nebraska lawmaker lives in his district

Nebraska State Sen. Tom Brewer faced questions in 2014 and 2016 over whether he lived in the Sandhills district he aimed to serve.
NEBRASKA STATE・1 DAY AGO
KMTV 3 News Now

A proposed revision to Nebraska’s “right to farm” law, promoted as increasing protections for farmers, is being condemned by environmentalists as a way to eliminate nearly all nuisance lawsuits.
NEBRASKA STATE・3 DAYS AGO
KMTV 3 News Now

Nebraska has joined 24 other red states in a lawsuit seeking to block a new rule they claim frees up 401K managers to invest in so-called “environmental, social and governance” funds.
NEBRASKA STATE・1 DAY AGO
KMTV 3 News Now

Nebraska Governor Jim Pillen is delivering his State of the State address in Lincoln Wednesday. Gov. Pillen will outline his goals for his term as governor.
NEBRASKA STATE・3 DAYS AGO
KMTV 3 News Now

While it was his first State of the State address the topics discussed by Gov. Pillen should be familiar to any Nebraskan who has been paying attention to state politics over the last year.
NEBRASKA STATE・3 DAYS AGO
KMTV 3 News Now

Though Omaha city officials have greenlighted the $300 million-plus urban streetcar project, a Nebraska lawmaker is waving the caution flag and has proposed legislation that could disrupt the flow.
OMAHA, NE・5 DAYS AGO
KMTV 3 News Now

Omaha man sentenced to over 13 years for armed bank robberies

An Omaha man was sentenced on Tuesday for his part in a series of armed bank robberies in Nebraska over a three-year period.
OMAHA, NE・4 DAYS AGO
KMTV 3 News Now

Tyson Foods among other poultry companies now have less than two months to reach an agreement with the state of Oklahoma on how to clean a watershed polluted by chicken litter.
OKLAHOMA STATE・8 DAYS AGO
KMTV 3 News Now

Nebraska Medicine announced on social media that its phones are not working at its clinics and hospitals on Monday night.
NEBRASKA STATE・5 DAYS AGO
KMTV 3 News Now

A nationwide comparison of electric utility performance found that customers in states that are heavily reliant on fuel oil and natural gas tend to pay more.
ILLINOIS STATE・8 DAYS AGO
KMTV 3 News Now

Pro-abortion rights protesters gathered around state capitols across the country Sunday, including in Lincoln, to speak out for reproductive rights.
LINCOLN, NE・5 DAYS AGO
KMTV 3 News Now

Black History Month is almost here and a contest calls for students to commemorate it with art. The Nebraska Black History Art Contest is open to K through 12th grade students.
NEBRASKA STATE・7 DAYS AGO
KMTV 3 News Now

Forty-three-year-old Carrie Jones appeared in Cedar County to set a date for her preliminary hearing. That hearing will be on February 15.
LAUREL, NE・5 DAYS AGO