Bijani: Is Deshaun Watson’s return a welcomed distraction for Texans? 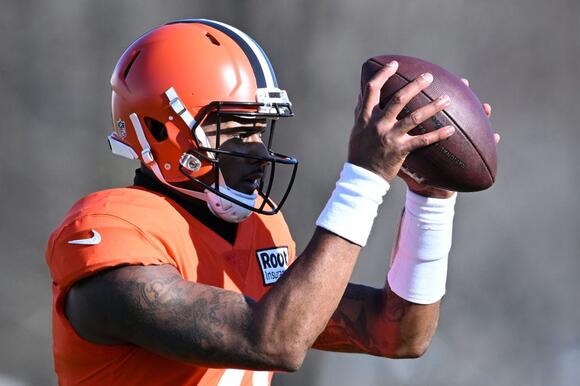 (SportsRadio 610) - Less than a year ago, the Texans couldn’t wait for the Deshaun Watson questions to stop flowing in.

Now, what was likely circled on their calendar as the biggest hurdle to overcome this season is finally upon them. A tumultuous month is thankfully near its end.

But not before one of the most highly anticipated games across the NFL calendar is played.

Getting through Brandin Cooks’ emotional week after failing to trade the veteran receiver, over dramatizing and botching a quarterback change and suffering through another embarrassing offensive performance leads us into the return of Deshaun Watson .

This coming Sunday marks Watson's first regular-season game since the finale of the the 2020 season when he last played for the Texans, or anyone for that matter.

Coming off an 11-game ban, Watson is set to take the reigns from Jacoby Brissett, who has put together one of his best seasons as a pro and is fresh off leading the Browns to an 23-17 overtime victory over Tom Brady and the Tampa Bay Buccaneers.

Smith spent more than half of the time Monday answering questions about Watson, the Browns and their own injury issues than he did his team's sixth consecutive loss.

At this point, it likely serves as a mild break from having to answer some tougher questions he’s been tasked with, better suited for Texans general manager Nick Caserio.

“I assume playing quarterback is a lot like riding a bike. It comes back to you fairly quickly,” Smith said. “I know he has been practicing with them. They have been playing good football. Adding Deshaun will make them that much better.“

Good to know that playing quarterback is that easy.

Smith certainly didn’t sound as confident in a player getting back on the old rusty bicycle when discussing Kyle Allen’s play in the first half Sunday afternoon.

“We as an offense can't allow that to happen. And our quarterback starts it all,” Smith said. “So Kyle didn't start and the offense didn't start the way we needed to.”

Nevertheless, Monday began what should be a fairly entertaining week leading up to the week 13 matchup at NRG Stadium.

The memes, parody videos, questions to be asked and the articles that will be written.

All of it much more interesting and entertaining than recounting a loss and listening to Smith blow smoke about progress being made.

Deshaun Watson will speak publicly at some point, likely toward the middle of the week.

That should be fun.

Following their victory Sunday over the Buccaneers, while the Browns (4-7) still have less than a 10% chance to make the playoffs, it would actually behoove the Texans to actually try and win a game Sunday, as they would like to ensure the 2023 Browns first-round pick that they own stays inside of the top-10 selections.

Fat chance maybe, but it wouldn’t hurt their case much as they seem firmly entrenched as the number one overall selection.

As wild and whacky as the NFL is and has been this season, don’t hold your breath.

But enjoy the week leading up to it.

Shaun Bijani has spent the last 16 years covering the Houston sports scene for SportsRadio 610. Follow him on Twitter @ShaunBijani .

After making the conference championship game for a second time in as many seasons, Cincinnati Bengals suffered a tough loss to the Kansas City Chiefs following a costly penalty in the final seconds of the game that set up a game-winning field goal for the Chiefs. It wasn’t the outcome the team had hoped for, Read more... The post Joe Burrow reacts to loss with bold message appeared first on The Comeback: Today’s Top Sports Stories & Reactions.
CINCINNATI, OH・1 DAY AGO
Athlon Sports

Patrick Mahomes is done hearing about all this "Burrowhead" talk.  During his postgame interview on Sunday night, Mahomes took a shot at Joe Burrow and the Bengals.  The Chiefs quarterback made it clear it's called Arrowhead Stadium.  “We showed this place is Arrowhead, it’s not ...
CINCINNATI, OH・2 DAYS AGO
Whiskey Riff

It’s the sound of hearts breaking across Philadelphia and the state of Pennsylvania… and let’s be honest, everywhere else in the country, too. Eagles quarterback Jalen Hurts made a very rare public appearance with his girlfriend Bryonna “Bry” Burrows after the NFC Championship game this past Sunday, which is a surprise to many fans, as he is extremely private about his life outside of football.
PHILADELPHIA, PA・22 HOURS AGO
Yardbarker

The Pittsburgh Steelers and Philadelphia Eagles have been in the NFL since its inception. The two teams even briefly combined forces during World War II and called themselves the Steagles. The players and coaches didn’t like it then and the two fan bases don’t like each other now. Fans from the same state rarely get along and the vitriol was on display after the Eagles made their second Super Bowl in five seasons.
PHILADELPHIA, PA・1 DAY AGO
Athlon Sports

Patrick Mahomes' wife, Brittany, wants all the smoke.  Brittany, who's never been afraid to speak her mind on social media, just posted a message for the Bengals.  Hint: It's not very friendly.  "Cancun on 3," she said on Twitter.  "Cancun on 3" has become a trendy phrase in the ...
CINCINNATI, OH・2 DAYS AGO
Larry Brown Sports