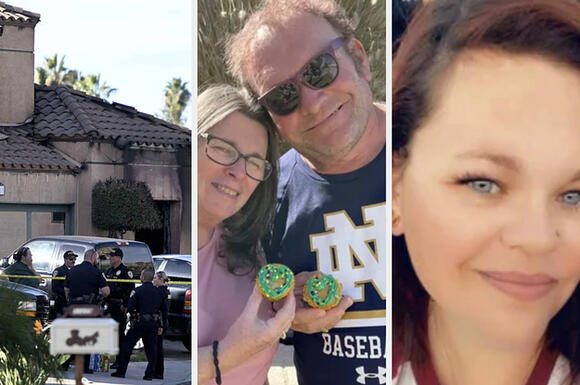 A 28-year-old law enforcement officer who had catfished a teen girl traveled across the country to her home and killed her family before leading local police on a pursuit and being fatally shot himself.

Austin Edwards, who had worked as a state trooper and for a sheriff's office in Virginia, met the teenage girl online, lying about who he was and developing a relationship with her, the Riverside, California, police department said. He then traveled from Virginia to California on Friday and, authorities believe, set fire to the family home and killed her grandfather, grandmother, and mother. He and the teen then got into his car, and he fled.

A neighbor told KABC that she called the police when she saw Edwards and the girl, without pants or shoes on, get in his car. Police told KABC that the teen had tried to say something, but according to the neighbor, the girl could not get the words out.

"She did seem and appear a little distressed, so it was concerning enough to these people to call," Ryan Railsback, public information officer for the Riverside Police Department, told KABC.

Police officers were dispatched to the home, but when they got there, firefighters had already arrived to respond to heavy fire on the first floor. When firefighters went inside, they found Mark Winek, 69, Sharie Winek, 65, and Brooke Winek, 38, on the floor and pronounced them dead after pulling them outside.

Their cause of death remains under investigation, but authorities said they believe the fire was intentionally set, and the Wineks are considered homicide victims.

The girl was unharmed and put into protective custody.

“Our hearts go out to the Winek family and their loved ones during this time of tremendous grief, as this is a tragedy for all Riversiders,” Riverside Police Chief Larry Gonzalez said in a news release. “This is yet another horrific reminder of the predators existing online who prey on our children. If you’ve already had a conversation with your kids on how to be safe online and on social media, have it again. If not, start it now to better protect them.”

Edwards was previously a trooper for the Virginia State Police before resigning in October, but most recently, he was employed at the Washington County Sheriff’s Office in Virginia.

In a statement to BuzzFeed News, the Virginia State Police said it conducts a thorough background check as part of its hiring process and that there was no concern regarding Edwards.

The Washington County Sheriff’s Office said in a statement to BuzzFeed News that a background check on Edwards did not bring up any signs of trouble or prior investigations.

“It is shocking and sad to the entire law enforcement community that such an evil and wicked person could infiltrate law enforcement while concealing his true identity as a computer predator and murderer. Our thoughts and prayers are with the Winek family, their friends, officers, and all of those affected by this heinous crime,” said Washington County Sheriff Blake Andis in a statement.

A GoFundMe has been set up for the Winek family, including the girl and her sister.

"Over the Thanksgiving weekend, Mark, Sharie, and Brooke Winek lost their lives in a horrific triple homicide," the GoFundMe reads. "Mark Winek was a loving Father, Grandfather, Uncle, Brother, and Coach at Arlington High School. Sharie Winek was a sweet and caring Mother, Grandmother, Sister, and Aunt who cherished spending time with her family. Brooke Winek was a beloved single mother with the biggest heart and found her most immense joy in following her daughter in the Color Guard at Arlington High School. The proceeds from this GoFundMe will help cover the ongoing support of the two teenage daughters, who lost their mother and need future care. Thank you for your contributions during this sorrowful time. Mark, Sharie, and Brooke will truly be missed."

The Los Angeles police department announced on Saturday that two of the four injured are in critical condition, while two are stable.
LOS ANGELES, CA・23 HOURS AGO
BuzzFeed News

A 26-Year-Old Man Confronted The Monterey Park Shooter And Disarmed Him, Saving Lives

"Something came over me," Brandon Tsay, 26, told Good Morning America. "I needed to take this weapon, disarm him, or else everybody would have died."
MONTEREY PARK, CA・6 DAYS AGO
BuzzFeed News

Older Asian Americans In Monterey Park Found A Community In Ballroom Dancing. Some Say A Mass Shooting Won’t Sway Them.

The sudden eruption of mass violence shook the quiet city of Monterey Park, and its tight-knit ballroom community members who found joy and freedom in dancing.
MONTEREY PARK, CA・3 DAYS AGO
BuzzFeed News

The Monterey Park Shooting Victims Have Been Identified. Here’s What We Know About Them.

"What was meant to be a night out celebrating the Lunar New Year with friends ended up being a devastating and life-changing event for my family."
MONTEREY PARK, CA・3 DAYS AGO
BuzzFeed News

The News You Missed From The Weekend

Chelsea Handler Said She Didn’t Know She Was On Ozempic, The Diabetes Medicine Being Used To Lose Weight

The rise in people taking the drug has led to a shortage for those with Type 2 Diabetes who need it.
LOS ANGELES, CA・3 DAYS AGO