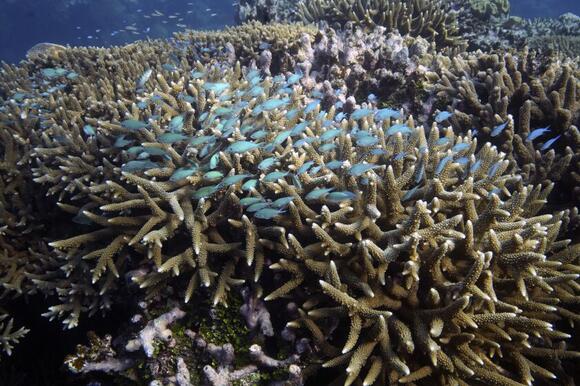 Australia’s environment minister said Tuesday her government will lobby against UNESCO adding the Great Barrier Reef to a list of endangered World Heritage sites, arguing that criticisms of government inaction on climate change were outdated.

Officials from the U.N. cultural agency and the International Union for Conservation of Nature released a report on Monday warning that without “ambitious, rapid and sustained” climate action, the world’s largest coral reef is in peril.

The report, which recommended shifting the Great Barrier Reef to endangered status, followed a 10-day mission in March to the famed reef system off Australia’s northeast coast that was added to the World Heritage list in 1981.

Environment Minister Tanya Plibersek said the report was a reflection on Australia’s previous conservative government, which was voted out of office in May elections after nine years in power.

She said the new center-left Labor Party government has already addressed several of the report’s concerns, including action on climate change.

“We’ll very clearly make the point to UNESCO that there is no need to single the Great Barrier Reef out in this way" with an endangered listing, Plibersek told reporters.

The new government has legislated to commit Australia to reducing its greenhouse gas emissions by 43% below the 2005 level by 2030.

The previous government only committed to a reduction of 26% to 28% by the end of the decade.

Plibersek said her government has also committed 1.2 billion Australian dollars ($798 million) to caring for the reef and has canceled the previous government’s plans to build two major dams in Queensland state that would have affected the reef’s water quality.

The minor Greens party, which wants Australia to slash its emissions by 75% by the end of the decade, called for the government to do more to fight climate change in light of the report.

Jodie Rummer, a marine biologist at James Cook University in Townville who has worked on the reef for more than a decade, supported calls for Australia to aim for a 75% emissions reduction.

“We are taking action, but that action needs to be much more rapid and much more urgent,” Rummer told Australian Broadcasting Corp.

“We cannot claim to be doing all we can for the reef at this point. We aren’t. We need to be sending that message to the rest of the world that we are doing everything that we possibly can for the reef and that means we need to take urgent action on emissions immediately,” she added.

Feedback from Australian officials, both at the federal and state level, will be reviewed before Paris-based UNESCO makes any official proposal to the World Heritage committee.

In July last year, the previous Australian government garnered enough international support to defer an attempt by UNESCO to downgrade the reef’s status to “in danger” because of damage caused by climate change.

Australian government scientists reported in May that more than 90% of Great Barrier Reef coral surveyed in the latest year was bleached, in the fourth such mass event in seven years.

Bleaching is caused by global warming, but this is the reef’s first bleaching event during a La Niña weather pattern, which is associated with cooler Pacific Ocean temperatures, the Great Barrier Reef Marine Authority said in its annual report.

Coral bleaches as a response to heat stress and scientists hope most of the coral will recover from the latest event.

China's Foreign Ministry said the craft was a lost civilian balloon, the same explanation it gave for a suspected spy balloon that drifted over the US.
NORTH CAROLINA STATE・1 DAY AGO
Business Insider

China is mad at the US for blasting its suspected spy balloon, but a few years ago, state TV bragged its fighter pilots could shoot one down

The sheer scale of the devastation of the earthquake and its aftershocks can be seen in social media photos and videos posted by people in Turkey and Syria. Eyewitnesses have also been speaking about what happened. BBC News has been pulling together and verifying information. The tremors of the main...
2 DAYS AGO
San Diego Union-Tribune

As U.S.-China relations cool amid trade disputes and espionage fears stoked by the Chinese spy balloon shot down off the Atlantic Coast, lawmakers in Congress and at least 11 statehouses are weighing legislation to further limit foreign ownership of farmland
MONTANA STATE・4 HOURS AGO
San Diego Union-Tribune

China says it was smeared in U.S. President Joe Biden's State of the Union address that repeatedly mentioned competition between the two countries
WASHINGTON STATE・6 HOURS AGO
San Diego Union-Tribune

This gallery shows the most compelling scenes from a devastating earthquake which hit southeast Turkey and northern Syria on Monday, February 5, 2023.
2 HOURS AGO
San Diego Union-Tribune

IEA: Asia set to use half of world's electricity by 2025

Spain's government has pledged stronger action against cybercrime, which has come to account for about a fifth of all offenses registered in the country
45 MINUTES AGO
San Diego Union-Tribune

Sweden weighs up whether to bid for 2030 Winter Olympics

US forces returning to Philippines to counter China threats