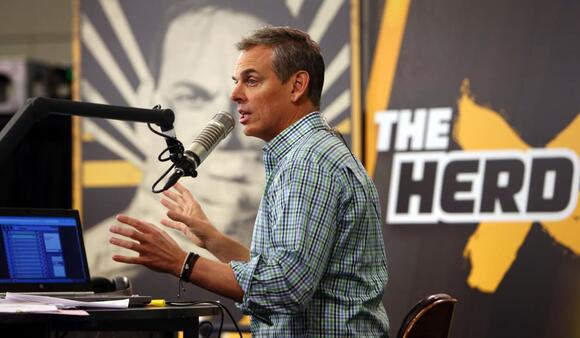 The Lakers have been on a tear as of late. They have won five of their last six games, and Anthony Davis has been playing like the superstar that he is. AD has averaged 33.4 points and 17.6 rebounds in his previous five games while shooting over 60% from the field and only attempting three threes in those contests.

However, the Lakers are still under .500 but are treading in the right direction.

The host of “The Herd” on FS1, Colin Cowherd, suggested a couple of days ago that the Lakers should trade Anthony Davis for some “B+ level talent,” he elaborated on his show.

“His last four games he is averaging 35 points and 18 rebounds, he played great again last night. I said about a month ago this is precisely the time that you trade him [Anthony Davis]. It’s the perfect storm. LeBron is out, so Anthony Davis is getting tons of touches. Anthony Davis has heard his ‘soft’ critics so he’s really worked as hard as he’s ever worked. In the end, are the Lakers close to a championship team? No.”

This will be a downgrade for the Lakers if they trade Anthony Davis. You will not get anywhere near the talent in return for AD. He’s still 29 years old; he is a terrific talent on the offensive end and may be better on the defensive end.

Not only that, but you could be giving up your best player on the team. As great as LeBron is and will remain, head coach Darvin Ham stated that AD needs to be the focal point of the offense and that it needs to run through Anthony Davis.

LeBron James is back, and he looked phenomenal in his second game against the Spurs, scoring 39 points and 11 boards.

When healthy, this duo is the best in the league, and the Lakers have been playing some good basketball.

If anything, this would be the worst time to trade AD since he’s finding a rhythm, so is LeBron, and the whole team seems to be fulfilling their role.

Keep the duo intact, and they must continue to hang their head on the defensive end.

LeBron James is being attacked for the way he responded to the video beatdown of Memphis motorist Tyre Nichols on Jan. 7, 2023,. The 29-year-old Black male was beaten to a pulp on the streets of Memphis, Tennessee, following a traffic stop for allegedly driving recklessly, though that was never established by the responding officers.
MEMPHIS, TN・1 DAY AGO
AllLakers

Will he keep the pressure on the team president to keep making moves?
LOS ANGELES, CA・22 HOURS AGO
AllLakers

That great's jersey is retired in LA, so he had to pivot.
LOS ANGELES, CA・14 HOURS AGO
AllLakers

Any level of veteran leadership is welcome.
LOS ANGELES, CA・16 HOURS AGO
AllLakers

There's almost no chance this will happen, though.
LOS ANGELES, CA・2 DAYS AGO
AllLakers

The two players were previously teammates with the Washington Wizards.
LOS ANGELES, CA・1 DAY AGO
AllLakers

The 2020 champ would look good back in the purple and gold.
LOS ANGELES, CA・2 DAYS AGO
AllLakers

The Lakers may look for a cheaper option that can provide immediate help.
LOS ANGELES, CA・1 DAY AGO
AllLakers

Lakers Injury News: Nets, LA To Be Without Two Stars Each On Monday

LA will lean on role players to step up.
LOS ANGELES, CA・12 HOURS AGO
AllLakers

The Lakers are shorthanded on Monday.
LOS ANGELES, CA・12 HOURS AGO
AllLakers

All Lakers Expert Predictions For Saturday Night's Matchup Against The Celtics

LA will have to capitalize on some Boston injuries tonight.
LOS ANGELES, CA・2 DAYS AGO
AllLakers

Lakers: No LeBron James, No Anthony Davis, No Hope For LA In Brooklyn Blowout