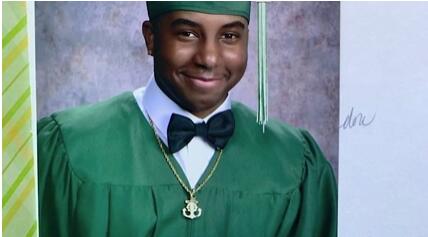 ALBUQUERQUE, N.M. (KRQE) – The family of the UNM student killed in an on-campus shooting after police say he shot at an NMSU student is speaking out and demanding answers on if Brandon Travis’ death could’ve been prevented. Nearly 40 of Brandon Travis’ family, friends, and coaches joined a Zoom call, sharing who they knew Brandon to be.

“He was just so positive to be around,” said one of his childhood friends. Nineteen-year-old Travis was a 2021 graduate from Inglewood High School in Southern California where he played football.

“He just had a great spirit about him. His attitude, everything about him was infectious,” said Mil’Von James, his high school football coach.

His parents said he came to UNM on an academic scholarship. He was also a member of the student organization Brothers Leading And Cultivating Knowledge, which supports black male students in their academic, personal, and professional goals through volunteering and community engagement.

The news of Brandon’s death shocked those who knew him. “It was emotional when I heard about it….his father was on the phone crying because that’s something you would’ve never expect to happen for him,” said Scott, Brandon’s youth football coach.

According to investigators, Travis and his two friends conspired with another UNM student to get NMSU student, Mike Peake, onto the UNM campus where they planned to jump him. Police say surveillance video shows Travis shooting Peake, who then shot back and killed him.

Police say those involved that night told detectives they wanted payback after a fight with Peake and others at the UNM-NMSU football game in Las Cruces back in October. A video of the fight has been circulating on social media.

“They see him down in the fetal position and he’s being kicked repeatedly, and black eyes and someone comes out with a broken jaw…and law enforcement is standing there and nobody’s doing anything,” said Byron, Brandon’s uncle.

No one from that fight was arrested by State Police. In a news conference last week, NMSU said they became aware of the video about five or six days after the fight happened. They said they were working on identifying who was involved. Meanwhile, NMSU Athletics Department said the student-athletes they knew were involved faced disciplinary action. But, they did not elaborate on who was disciplined or how. NMSU also said because there was no police report or arrest, the Dean of Students did not talk to their counterparts at UNM about the brawl.

Travis’ family said more should’ve been done. “That officer would’ve had a duty to act as well as the college. Had that been done, we possibly wouldn’t be doing this interview with you,” said Byron. “They didn’t act. So, all we’re asking for is just answers. That’s all we’re asking for.”

While they wait for the investigation to play out, they’re focusing on Brandon’s life before that fateful night. “I think a person is always better than what we consider the worst thing they’ve done. They have a lot of good in their life. They’ve contributed to society and Brandon is no different,” said Byron.

On Monday, NMSU told KRQE Peake was still enrolled in the university and on the basketball team. State police said the investigation is ongoing and at this point, Peake is not facing charges for bringing a firearm on UNM’s campus, which is against school policy and state law. KRQE asked state police for comment on why no arrests were made after the October brawl at the Las Cruces game but has not heard back.

He made a bad choice that night. Why would anyone in there right mind be involved in this. Good kid or not he eventually paid the price. Don’t agree with anyone being killed but he should not have been there.

we all make good and bad choices in life some have to live with it and some die because of tgose choices. a fight is one thing but conspiring to rob hurt or kill is another. he should have been a griwn man about it and went to tge police when the initial fite took place. he was wrong and died because of his own actions.

Thursday’s Top Stories Thursday’s Five Facts [1] Foster child allegedly molested at Albuquerque CYFD office building – According to the Albuquerque Police Department, officers were dispatched to the CYFD building in Albuquerque back in December for a sexual abuse call. The police report said a staff member found a 10-year-old boy and a 14-year-old foster […]
ALBUQUERQUE, NM・11 HOURS AGO
KRQE News 13

"They would treat us like inmates in a prison."
ALBUQUERQUE, NM・20 HOURS AGO
KRQE News 13

Man accused of murder in Albuquerque arrested in California

ALBUQUERQUE, N.M. (KRQE) – The Albuquerque Police Department says they have arrested a suspect accused of killing a homeless man in October 2022. Police say Brandon Chatmon shot and killed Vincent Lopez outside of a Wingstop near San Mateo and Zuni last October. Employees said they saw a transient...
ALBUQUERQUE, NM・1 HOUR AGO
KRQE News 13

ALBUQUERQUE, N.M. (KRQE) – An empty concrete pad at Alamosa on Albuquerque’s west side could be home to a new sculpture soon. But first, artists need to submit ideas. The City of Albuquerque is now taking submissions for a stone, metal, or other “easily maintained” sculpture. The sculpture should fit on the 10-foot by 6.5-foot concrete […]
ALBUQUERQUE, NM・2 HOURS AGO
KRQE News 13

No license plate in Albuquerque? Prepare for a police crackdown

ALBUQUERQUE, N.M. (KRQE) – Donald Duquette, the man who shot and killed a driver at the Big -I in Albuquerque has been convicted by a jury. In 2019, Duquette turned himself in and admitted to shooting and killing Jose Diaz in a truck on an I-40 flyover. Duquette had told officers he had smoked meth and […]
ALBUQUERQUE, NM・6 HOURS AGO
KRQE News 13

SANDOVAL COUNTY, N.M. (KRQE) – Sandoval County deputies have arrested a man for shooting and killing a Jemez Valley school teacher. Deputies responded to a 911 call in Ponderosa about a broken window and a dead man inside a rental home. They found the body of 59-year-old Joseph William Keleher – a social studies teacher at […]
PONDEROSA, NM・1 DAY AGO
KRQE News 13

Study: New Mexico cities in top 25 for getting married

NEW MEXICO (KRQE) – A new WalletHub study ranks the best and worst places for couples to get married in the U.S. Albuquerque and Las Cruces both made the list. The Duke City came in at #23 and Las Cruces at #24. The study ranked 182 U.S. cities weighing costs, facilities, and activities. Albuquerque had a […]
LAS CRUCES, NM・1 DAY AGO
KRQE News 13

LOS LUNAS, N.M. (KRQE) – He’s been in and out of jail again and again for stolen cars. In one case, he simply let himself out of a state police holding cell, escaping in handcuffs. Now, as KRQE News 13 investigative reporter Gabrielle Burkhart found, this repeat offender is back in trouble and back out on the […]
VALENCIA COUNTY, NM・1 HOUR AGO
KRQE News 13

During the incident, Barcelona Rd. and La Junta Rd. were closed. It has since been reopened.
ALBUQUERQUE, NM・1 DAY AGO
KRQE News 13

ALBUQUERQUE, N.M. (KRQE) – A 26-year-old Albuquerque man with 14 outstanding warrants is now in police custody, accused of stealing a police bait car and shooting at officers. Christian Wood was arrested by APD Thursday afternoon at a home on Delamar Avenue NE, near Carlisle and Comanche. Wood is the first of APD’s 25 suspects with […]
ALBUQUERQUE, NM・40 MINUTES AGO
KRQE News 13

ALBUQUERQUE, N.M. (KRQE) – Alex Vallejos, accused in a 2020 Albuquerque murder was expected to take a plea deal Wednesday. Instead, he ended up turning the deal down. In March 2020, police say Vallejos and a group of people went to a home near Central and Coal, planning to rob the place. Witnesses told police gunfire broke […]
ALBUQUERQUE, NM・1 DAY AGO
KRQE News 13