Darnell Mooney Lost to Bears for the Season 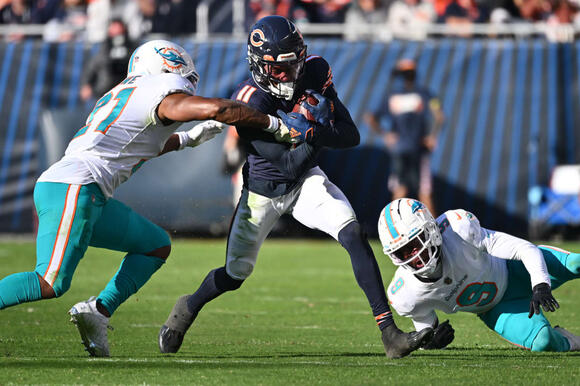 Darnell Mooney's ankle injury is a season-ender and he'll go on IR, while Eddie Jackson's fate is uncertain.

Whenever Justin Fields gets back from injury, he'll need to come up with a new favorite target.

Darnell Mooney is lost for the season amid a rash of injuries to hit the team over the last two weeks, and especially Sunday in a 31-10 loss to the New York Jets. Mooney has to have ankle surgery and is going on injured reserve.

The fate of safety Eddie Jackson has yet to be announced but it doesn't look good after he went down with a foot injury in the loss.

"Eddie goes down, Darnell Mooney goes down, you have a couple of guys go down," Bears coach Matt Eberflus said. "The other guys hae got to step up and the other guys have to get into different positions and operate and I think we need to do a better job of that.

"That's a coach and player partnership that needs to get that done."

The Bears were so short on safeties Sunday that their final two were playing in the game on defense, as Jaquan Brisker remains out with a concussion and Dane Cruikshank suffered a hamstring injury Sunday. It was reserves DeAndre Houston-Carson and rookie Elijah Hicks.

"All I told Elijah at one point is it's just like practice," Houston-Carson said. "You know? Don't make it too big. And I think he did a great job when he came in."

Replacing Mooney won't be easy after he had a team-high 40 receptions. Two candidates to do so, Chase Claypool and Equanimeous St. Brown, suffered minor injuries in the game that Eberflus didn't want to reveal, but he called them day to day.

"Once we got going into the offense, I think (Mooney) really started to shine," Eberflus said. "Outstanding at blocking the perimeter. He had a really nice connection with Justin throughout that stretch. He is our leading receiver.

"But more importantly he is a great teammate. He’s a great leader. No one puts more yards in than Darnell Mooney. I'll promise you that. He laps people. He doubles them up."

Mooney was actually injured trying to block for David Montgomery on a 14-yard run up the middle from the Bears 1-yard line. Montgomery broke the tackle of Jordan Whitehead and the Jets safety rolled off away from the play and up on the back of Mooney's legs as he blocked.

"I mean just his attitude, you feel it in the building," Kmet said. "He just brings light in the room, a great leader, a dude that everyone seems to gravitate towards.

"So whenever you lose a guy like that in the huddle it's definitely tough for the team. And not only, obviously he's a great playmaker but just his attitude and how he approaches his day to day is just really special."

Kmet talked with Mooney on the way back from New Jersey.

"He's going to have some down time," Kmet said. "He was looking for a show to watch so I recommended Yellowstone. But yeah, I'm definitely going to keep his spirits up for sure and know he's going to have a big comeback."

It will have to be next year.

Whether Jackson's comeback is next year remains to be seen but it didn't look good.

Kmet looked at those injuries and others in Sunday's game like a shoulder injury to tackle Larry Borom and an ankle injury to tackle Riley Reiff and said football is simply more violent than many people like to acknowledge.

Kmet called the possibility of injury a good reason not to simply start using young players in the lineup with starters now in the final five games just to take a look at them. However, they may need to use all of those young players with so many veterans getting hurt.

"Just throwing somebody out there just to see how they're going to do, that's a scary thought for me and for other guys," Kmet said. "You want to be able to trust all the guys on the field to know they're doing their job because it is a nasty, violent sport and it shows up and it showed up yesterday for sure."

The early mock drafts held Will Anderson Jr. as a pick for the Bears at No. 1 but now there's a new No. 1 and choice for them.
CHICAGO, IL・51 MINUTES AGO
BearDigest

A quarterback who can run is going to be a trend for the future at the position Bears QB Justin Fields says.
CHICAGO, IL・17 HOURS AGO
BearDigest

A few under-the-radar types who stepped up at the Senior Bowl could fit the Bears defensive scheme, as can some bigger names.
CHICAGO, IL・12 HOURS AGO
OnlyHomers

The New England Patriots are currently set up well with two young quarterbacks, Mac Jones and Bailey Zappe, who both have winning records as starting quarterbacks during their short tenure in the league.
21 HOURS AGO
BearDigest

Former Bears safety Chris Harris was reported as hired by the Titans but now a report says he still could come to Chicago
CHICAGO, IL・2 DAYS AGO
BearDigest

Tom Brady's retirement decision is impactful on the Bears well beyond the fact Tampa Bay is on the 2023 schedule.
CHICAGO, IL・1 DAY AGO