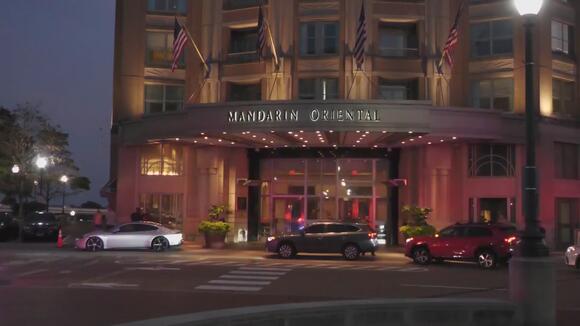 WASHINGTON (DC News Now) — The woman who was charged with shooting her husband at the Mandarin Oriental hospital in D.C. pleaded guilty on Monday.

Shantari Weems pleaded guilty to aggravated assault and carrying a gun without a license before the D.C. Superior Court.

She told police that accusations about her husband, 57-year-old James Weems Jr., sexually assaulting children at their Owings Mills daycare led her to shoot him on July 21.

Several days after the shooting, the Baltimore Police Department came forward with information about an arrest warrant for James Weems Jr. after he was accused of sexually assaulting at least three children at the daycare.

He faces 13 counts of sex offense charges involving those children.

MONTGOMERY COUNTY, Md. (DC News Now) — A grocery store customer who was assaulted during an encounter with a group of people in Gaithersburg said one person in the group made anti-Jewish comments towards him before hitting him and causing him to pass out. The Montgomery County Department of Police said they arrested 30-year-old Eugene […]
GAITHERSBURG, MD・7 HOURS AGO
DC News Now

DUMFRIES, Va. (DC News Now) — Police arrested a teacher’s assistant after an alleged assault in a Prince William County preschool center on Wednesday. Officers were called to the Washington-Reid Preschool Center in Dumfries to investigate the alleged assault, which happened on Tuesday. They said that a 5-year-old boy and the accused were in the […]
PRINCE WILLIAM COUNTY, VA・23 HOURS AGO
DC News Now

MOUNT VERNON, Va. (DC News Now) — Police said that a dog that had been chained to a fence in Fairfax County was shot. Officers were called to the area of Bedford Terrace and Beekman Place around 3:35 a.m. after receiving reports of a dog that was chained to a fence. When police arrived, they […]
FAIRFAX COUNTY, VA・3 HOURS AGO
DC News Now

ASHBURN, Va. (DC News Now) — Two suspects stole 10 handguns from a shooting range in Ashburn on Monday, police said. Police said that the burglary happened between 3:45 and 4:50 a.m. at the Silver Eagle Group on Beaumeade Circle. Both people were wearing zip-up jackets or sweatshirts with hoods, face masks and gloves. The […]
ASHBURN, VA・2 DAYS AGO
DC News Now

17-year-old boy charged, accused of grabbing woman’s back side on Arlington trail

ARLINGTON COUNTY, Va. (DC News Now) — Police said a boy is facing a charge of Assault and Battery after he grabbed a woman’s buttocks as she was running along the Arlington Boulevard trail. The Arlington County Police Department said the incident took place on Nov. 29, 2022 around 3:05 p.m. The woman, who was […]
ARLINGTON COUNTY, VA・2 DAYS AGO
DC News Now

KENSINGTON, Md. (DC News Now) — Police released surveillance footage of a man stealing a gorilla statue from an antique store in Kensington earlier this month. A statement said that the theft happened around 3:18 a.m. on January 4 at Design Emporium Antiques on Howard Avenue. The act was caught by a nearby surveillance camera, […]
KENSINGTON, MD・2 DAYS AGO
DC News Now

WASHINGTON (DC News Now) –The Metropolitan Police Department was on the scene of a barricade situation in Northwest Thursday morning. MPD said that at about 8 a.m., they responded to the 3600 block of 38th St. NW for a domestic violence call involving a person who may have been being held against her will. When […]
WASHINGTON, DC・1 DAY AGO
DC News Now

Men wanted for stealing packages from UPS truck in Rockville

ROCKVILLE, Md. (DC News Now) — Investigators asked for help in finding three people accused of taking packages from a delivery truck. The Montgomery County Department of Police said the theft took place around 10:50 a.m. on Jan. 10 in the 5700 block of Bou Ave. The department released images of the people whom they […]
ROCKVILLE, MD・1 DAY AGO
DC News Now

Search for suspects involved in string of burglaries across Frederick County, Md.

FREDERICK COUNTY, Md. (DC News Now) — The Frederick County Sheriff’s Office is searching for suspects who they said have conducted several burglaries throughout the county since December 28, 2022. According to the Sherriff’s Office Facebook page, there have been multiple burglaries involving the subjects shown in the video above. The white minivan in the […]
FREDERICK COUNTY, MD・2 DAYS AGO
DC News Now

GREENBELT, Md. (DC News Now) — Police were investigating a shooting that injured one man in Greenbelt on Tuesday evening. Police said they were called to the 5800 block of Cherrywood Lane around 6:17 p.m. The victim, a 25-year-old man, had been shot several times. He was transported to a local hospital. Police did not […]
GREENBELT, MD・3 DAYS AGO
DC News Now

‘dadbodbob’ from Loudoun County charged in connection to Capitol riot

WASHINGTON (DC News Now) — Federal investigators said a man from Loudoun County, Va., whose Twitter handle is @dadbodbob, was charged in connection to the riot at the U.S. Capitol that took place on Jan. 6, 2020. A criminal complaint filed in U.S. District Court for the District of Columbia by a special agent with […]
LOUDOUN COUNTY, VA・2 DAYS AGO
DC News Now

Pedestrian injured in crash in Bethesda

BETHESDA, Md. (DC News Now) — A pedestrian was hit by a car in Bethesda on Wednesday afternoon. At about 3:13 p.m., officers responded to the 4700 block of Elm Street for the report of a pedestrian who was hit. The victim was transported to a hospital in the area in serious condition, first responders […]
BETHESDA, MD・2 DAYS AGO
DC News Now

No injuries after house fire in Leesburg

LEESBURG, Va. (DC News Now) — Fire and Rescue were called to a house fire in Leesburg on Thursday afternoon. The fire took place on Royal Street. There were several road closures during the response: First responders said that nobody was injured in the fire, but crews were still on the scene for salvage and […]
LEESBURG, VA・1 DAY AGO
DC News Now

MANTUA, Va. (DC News Now) — Investigators determined that the fire that killed an 86-year-old woman the day after Christmas was accidental. The fire destroyed a home on Goodview Court on the evening of December 26. Officials said that it started on a natural Christmas tree and “involved the incandescent ornament lighting.” 86-year-old Christa Mensh […]
MANTUA, VA・2 DAYS AGO
DC News Now

Virginia's second-largest school district is working to make sure the risks to student safety are as low as possible by discussing past safety efforts and potential reforms in the near future.
PRINCE WILLIAM COUNTY, VA・1 DAY AGO
DC News Now