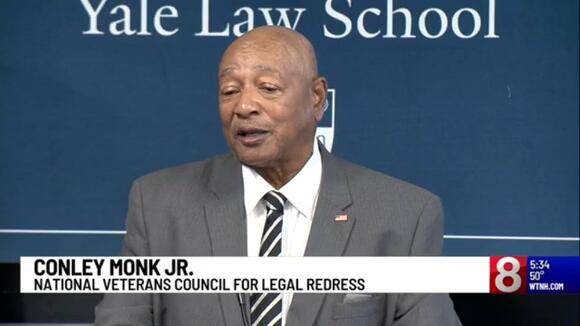 NEW HAVEN, Conn. (WTNH) — A lawsuit filed Monday in federal court in Connecticut accuses the U.S. Department of Veterans Affairs of perpetuating a history of racial disparities in how it handles benefit program claims.

Conley Monk, Jr., who served in the Vietnam War, said that his applications for educating, housing and disability benefits had been denied for decades, according to an announcement. Then, in December 2020, he learned he’d been eligible the entire time.

“A Black veteran who served honorably, could walk into the VA, file a disability claim and be at a significantly higher likelihood of having that claim denied,” said Adam Henderson, a Yale law student.

Yale law students are acting as his lawyers in the case, which he hopes extends beyond himself. Monk’s father was denied benefits in the 1940s after fighting at Normandy in World War II.

Monk’s legal team said that he’s received records from the VA showing a “significant difference” between Black and white veterans, with Black veterans being denied at higher rates.

“We’re hoping and praying that we’re successful in our fight because, once again, it’s not only for me and my father,” Monk said. “It’s for thousands of other veterans.”

A written statement from Terrence Hayes, the VA press secretary, said that there have been “unacceptable disparities” with military discharge status that can be attributed to racism.

“We are actively working to right these wrongs, and we will stop at night to ensure that all Black Veterans get the VA services they have earned and deserve,” the written statement reads. “We are currently studying racial disparities in benefits claims decisions, and we will publish the results of that study as soon as they are available — but we are not waiting on the results of the study to take action.”

The VA Center for Minority Veterans created Veteran Experience Action Centers across the country, which makes one-on-one help available to Black veterans navigating the claims process. Between April and June of 2022, more than 650 Black veterans have received aid, giving the process an 80% “trust score.”

“Additionally, we are taking steps to ensure that our claims process combats institutional racism, rather than perpetuating it; re-evaluating our policies to equitably serve Veterans who were wrongly given Other Than Honorable discharges; and proactively reaching out to Veterans with Other Than Honorable discharges to make sure they know that they may be able to access VA benefits and health care,” the statement reads.

Lawmakers at the state Capitol are debating the idea of a "safe harbor fund," which would pay for abortion services and travel for women living outside of Connecticut, where abortion is banned.
CONNECTICUT STATE・2 DAYS AGO
WTNH

HARTFORD, Conn. (WTNH) — The cost of higher education is always increasing. But now, Connecticut officials are making an effort to keep costs affordable for families across the state. New funding from Congress is expected to increase aid for students that receive Pell Grants, as these students often experience greater financial burdens. Federal Pell Grants […]
CONNECTICUT STATE・10 HOURS AGO
WTNH

(WTNH) – This week in Connecticut history, a mammoth fire changed a Connecticut city. March 1, 1975, overnight in Shelton, explosions and raging fire at the BF Goodrich Sponge Rubber Factory blew out windows and shook the neighborhood. The fire raged until the next day. No one was killed, but the fire was no accident. […]
SHELTON, CT・4 HOURS AGO
WTNH

UNION, Conn. (WTNH) — Living in one of Connecticut’s smallest towns means knowing your neighbors — all 1,000 or so of them. The Constitution State has four municipalities with populations exceeding 100,000 people, and four with populations under 1,500, according to population estimates from the Connecticut Department of Public Health. The state tracks data for […]
CONNECTICUT STATE・23 HOURS AGO
WTNH

HARTFORD, Conn. (WTNH) – The opioid epidemic is a crisis across the country, including in Connecticut. The state’s Department of Health says there were more than 1,200 confirmed overdose deaths last year, with 93% involving opioids. Now, two women in Hartford are making a grassroots effort to save lives. Community activist Kamora Herrington and licensed […]
HARTFORD, CT・2 DAYS AGO
WTNH

(WTNH) – While lawmakers in Connecticut are considering a new batch of gun laws proposed by Governor Ned Lamont, Connecticut’s U.S. Senators introduced a bill that would ban the manufacture and sale of assault weapons nationwide. Assault weapons were banned in Connecticut a decade ago shortly after Sandy Hook. On Friday, Senators Chris Murphy and […]
CONNECTICUT STATE・3 DAYS AGO
WTNH

WEST HARTFORD, Conn. (WTNH) — In 2005, the United Nations General Assemblydesignated Jan. 27 as International Holocaust Remembrance Day, the same day the liberation of Auschwitz-Birkenau took place in 1945. On Holocaust Remembrance Day each state is encouraged to honor the 6 million Jewish victims and millions of others while developing programs to help prevent […]
CONNECTICUT STATE・2 DAYS AGO
WTNH

NEW HAVEN, Conn. (WTNH) — The Connecticut Coalition to End Homelessness is out with its legislative agenda for the year. It wants lawmakers to invest 50 million dollars into the homeless response system. The group says the system is overburdened – underfunded – and facing a workforce shortage because providers cannot afford to pay employees […]
CONNECTICUT STATE・3 DAYS AGO
WTNH

Conn. (WTNH) — Connecticut officials are responding to the violent arrest and fatal beating of a Memphis man earlier this month following recently-released video footage. The man, 29-year-old Tyre Nichols, died three days after he was beaten by police in a traffic stop on Jan. 7. On Friday, the city of Memphis released both body […]
MEMPHIS, TN・2 DAYS AGO
WTNH

Hardest college to get into Connecticut, other states

(STACKER) – It is conventional wisdom that having a college education can be an enormous advantage in terms of furthering your career. With a college degree, you’re likely to make more money, get improved health and retirement benefits, and may find better career opportunities. Going to a selective school is considered by many to be […]
CONNECTICUT STATE・4 DAYS AGO
WTNH

EAST LYME, Conn. (WTNH) — The state could implement a cap on capacity at state parks in response to a jump in visitors at Connecticut State Parks. There were 17 million visits to the parks last year — six million more than in 2019. “You know the environment can only handle so much, and then […]
CONNECTICUT STATE・3 DAYS AGO
WTNH

WETHERSFIELD, Conn. (WTNH) — The Connecticut Department of Labor ordered its unemployment appeals filing feature to shut down this week after a technical error made it so data was available to one other filer, according to an announcement Thursday. The issue in ReEmployCT, which led to the system giving the same docket number to two […]
CONNECTICUT STATE・3 DAYS AGO
WTNH

A student's death on the University of Connecticut's Storrs campus is not being treated as suspicious, school officials said Friday.
STORRS, CT・3 DAYS AGO
WTNH

The best wings for Super Bowl Sunday in Connecticut: report

(WTNH) — The Super Bowl match is set. On Sunday, Feb. 12, the Philadelphia Eagles will go head-to-head with the Kansas City Chiefs in Super Bowl LVII. Whether you’re a Chiefs or Eagles fan, there’s one thing everyone can agree on: wings. In households across the country, people will be chowing down on their favorite […]
CONNECTICUT STATE・7 HOURS AGO
WTNH

Brother of lt. governor recovering after being hit by a car, having leg amputated

(WTNH) – The victim of a hit-and-run on the shoreline is battling back after life-changing injuries. It’s a story that made headlines across the state. The brother of Lieutenant Governor Susan Bysiewicz was hit while biking in Guilford and the driver took off. The injuries were so bad that John Bysiewicz had to have part […]
GUILFORD, CT・2 DAYS AGO
WTNH

Two conjoined twin girls who shared a liver were successfully separated Monday in a Texas hospital.
FORT WORTH, TX・4 DAYS AGO