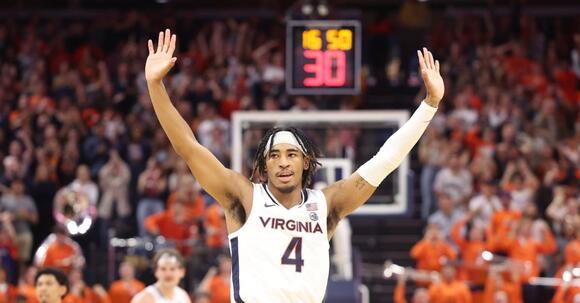 In the 24th and final edition of the ACC/Big Ten Challenge, Virginia heads to Ann Arbor for a tough road challenge at Michigan on Tuesday night. The Wolverines have a new, but talented roster centered around All-American center Hunter Dickinson. Beating them on the road will require a solid performance from the Cavaliers, who are now the No. 3-ranked team in the nation.

Read on for a full preview of Virginia at Michigan, including details on the game, an opponent scouting report, game notes, and a score prediction.

How to watch: ESPN

How to stream: fuboTV ( Start your free trial )

All-time series: The series between Virginia and Michigan is tied at 2-2

Michigan made the Sweet Sixteen last season, but returns only one starter from that team. That one returner is a big one, though, as 7'1" center Hunter Dickinson leads the way for the Wolverines. A consensus All-American as a freshman and a two-time All-Big Ten selection, Dickinson is a double-double machine and has great ball skills to go along with his size and strength. He is averaging a near double-double with 18.5 points and 9.5 rebounds per game, is shooting 60% from the floor, and is good to step outside for the occasional three, as he is 2/6 on three-pointers on the season. This will be a pivotal matchup for Kadin Shedrick, whose improvements from a strength standpoint will truly be tested as he tries to keep Dickinson away from the basket and off the boards on both ends of the floor.

The other key matchup will be whichever Cavalier is guarding Jett Howard, the 6'8" freshman guard and son of Michigan head coach Juwan Howard. Jett Howard is averaging 15.2 points per game on 50% shooting from the floor and 43.9% three-point shooting to go along with just under three assists per game. As Michigan's most prolific perimeter and guard threat, UVA would be inclined to put one of the best on-ball defenders in the country in Reece Beekman on Howard. But at 6'3", Beekman might struggle with the size advantage Howard would have over him. If Virginia tries to put a taller player like Jayden Gardner or Ben Vander Plas on Howard, they might have problems keeping Howard in front of them given his athleticism and ball-handling skills. There's no guarantee this will happen, but this could be a scenario in which Tony Bennett inserts Ryan Dunn into the game and sees how well the 6'8" freshman can neutralize Jett Howard. Either way, how Virginia decides to guard Howard will be a key factor in this game.

Michigan has gotten some solid contributions from junior forward Terrance Williams II, who is currently averaging 8.5 points and 6.8 rebounds per game, although he has struggled to shoot the ball from the perimeter to start the season. Princeton transfer Jaelin Llewellyn (7.7 ppg) and 6'4" sophomore guard Kobe Bufkin (9.2 ppg) round out the starting five.

Freshmen Dug McDaniel and Tarris Reed as well as 6'7" junior Jace Howard, also the son of Juwan Howard and older brother of Jett, have given the Wolverines some good minutes off the bench. Virginia will also see a familiar face in Duke transfer Joey Baker, who has been very valuable as a sharpshooter off the bench shooting 47.4% from three, an area in which Michigan has struggled as a team, shooting just 31.8% from the beyond the arc this season.

Michigan began the season ranked No. 22 and rose to No. 20 after the first week of the season, but the Wolverines have since dropped out of the AP Top 25 entirely. Michigan struggled in uninspiring and close wins over Eastern Michigan, Ohio, and Jackson State and suffered a blowout loss to Arizona State by 25 points on a neutral court. This will be a big week for the Wolverines, as they'll have two big opportunities to prove themselves with UVA coming to town on Tuesday night and then a showdown with Kentucky on Sunday in the London Showcase.

The Wolverines will have a chip on their shoulders as they look to prove themselves after some early-season struggles. Michigan will also have a significant home court advantage. Against a team with less experience, that would be a recipe for a Michigan win. But almost all of UVA's key rotation players are veterans who have experience playing and winning in hostile environments. This is Virginia's first true road game of the season and Michigan is a talented team, but this is a test UVA should be able to pass.

Virginia Up to No. 6 in Latest AP Top 25 Men's Basketball Poll

The Cavaliers rose one spot to No. 6 after dismantling Boston College on Saturday
CHARLOTTESVILLE, VA・1 DAY AGO
Cavaliers Now

Jayden Gardner Leads No. 6 Virginia to Gritty 67-62 Win at Syracuse

Gardner scored 17 points and made a couple of clutch plays late in the game to help the Cavaliers extend their winning streak to seven games
CHARLOTTESVILLE, VA・1 DAY AGO
Cavaliers Now

The Cavaliers added a talented and athletic safety to their 2023 recruiting class just before National Signing Day
CHARLOTTESVILLE, VA・2 DAYS AGO
Cavaliers Now

The Cavaliers swept the Tigers on Sunday to clinch a spot in the ITA National Team Indoor Championships
CHARLOTTESVILLE, VA・2 DAYS AGO
Cavaliers Now

Virginia Falls to No. 12 Virginia Tech 72-60 in Hard-Fought Battle

The Cavaliers kept pace with the Hokies until late in the fourth quarter, but ultimately came up short in the Commonwealth Clash
BLACKSBURG, VA・2 DAYS AGO
Cavaliers Now

Murphy will be the first former UVA basketball player to participate in the NBA Dunk Contest since Ralph Sampson in 1984
CHARLOTTESVILLE, VA・2 DAYS AGO