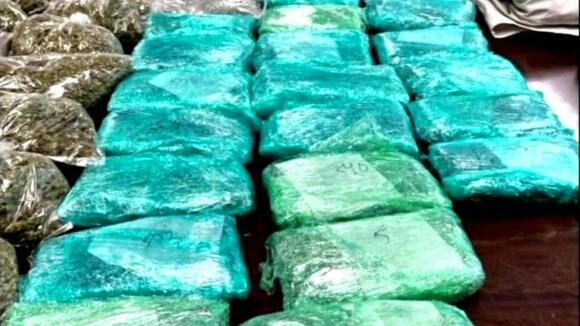 Though some nearby states have legalized the drug, federal law prohibits sending marijuana through the mail system.

Despite this, postal inspectors say they’ve seen tons of marijuana in the mail, which is a federal offense.

“Often, we’ll get calls from our carriers or a postmaster at a post office that gets a package that they suspect is narcotics,” said Rick Johnsten with the U.S. Postal Inspection Service.

A search warrant is needed to open the package, which is usually tipped off by a notable smell, a lot of packing tape, and with an origin address from a state with lax drug laws.

Ron Stucker with the Metropolitan Bureau of Investigation spoke about the process.

“Drug traffickers are running a business, like a legitimate business, and they have to figure out how to get their product from point A to point B,” said Stucker.

While the practice is becoming more common, it’s not likely that those mailing the drug will be prosecuted.

Criminal defense attorney Mark O’Mara says people who have packages of marijuana seized are rarely prosecuted unless they are also dealing in harder drugs, like cocaine and heroin.

Because of this, inspectors focus on cases like Devonne Walker. Investigators say Walker and his co-conspirators ran a large scale drug operation between central Florida and Arizona.

Investigators tied 100 pounds of marijuana to Walker, along with larger shipments of meth, cocaine, and heroin. He’s now serving 25 years in federal prison.

“We’re looking to prevent any damage being done or harming society with these dangerous drugs,” said Johnsten. “So, we get as many as we can as often as we can off the street. That’s our main priority.”

More than two dozen states have legalized or decriminalized marijuana, making it easier to get locally.

Shawn Denning, the top officer in Greensburg, Pennsylvania, used the app Wickr to run drug deals because he thought it was safe, prosecutors said.
GREENSBURG, PA・17 HOURS AGO
KRMG

TULSA COUNTY — The Tulsa County Sheriff’s Office (TCSO) arrested a man accused of stealing another man’s car and service dog. According to an court documents, on Nov. 7, 2022 a man reported to the the Tulsa Police Department that his car, a white 2015 BMW, was stolen.
TULSA COUNTY, OK・2 DAYS AGO
KRMG

Prosecutor: After killing 8 on bike path, motorist was happy

NEW YORK — (AP) — The man who killed eight people on a Manhattan bike path five years ago in a bid to impress a terrorist group was happy and proud when he met FBI agents later that day, a prosecutor told jurors in a closing argument on Tuesday.
MANHATTAN, NY・2 DAYS AGO
KRMG

MONTEREY PARK, Calif. — (AP) — The 72-year-old gunman who sprayed bullets into a Southern California ballroom dance hall, killing 11 people, had no known connection with the victims and investigators were still trying to determine a motive for the massacre, the Los Angeles County sheriff said Wednesday.
MONTEREY PARK, CA・1 DAY AGO
KRMG

BERLIN — (AP) — A 33-year-old man arrested on suspicion of fatally stabbing two teenagers and injuring five other passengers on a train in northern Germany had been released from pretrial detention a week ago and had previous criminal convictions, investigating officials said Thursday. The man, who was...
20 HOURS AGO
WSB Channel 2 Atlanta

Remains recovered in a rural Oklahoma county have been positively identified as 4-year-old Athena Brownfield, authorities said Thursday. Brownfield, of Cyril, had been missing for several weeks. In a brief news release, the Oklahoma State Bureau of Investigation said that the state’s office of the chief medical examiner positively identified the remains recovered on Jan. 17 as Brownfield. The remains were found in Grady County near Rush Springs.
GRADY COUNTY, OK・44 MINUTES AGO
CBS LA

Friends and family of Elliot Blair gathered in Orange on Thursday to remember their loved one who was found dead in Mexico last weekend. While Mexican authorities maintain that Blair, 33, died after falling from the balcony of his hotel room in Rosarito, Baja Mexico, on Jan. 14, his family believes that the Orange County-based public defender was killed while vacationing for his first wedding anniversary. They gathered at the Plaza Square in Old Towne Orange to pay their respects to Blair, but also to continue their determined search for answers into the truth behind his death. Blair's family has said that Rosarito...
ORANGE COUNTY, CA・1 HOUR AGO
KRMG

HOUSTON — (AP) — A group of death row inmates filed a federal lawsuit Thursday against the Texas prison system over its policy of mandatory and indefinite solitary confinement for all prisoners who are awaiting execution, saying it causes severe physical and psychological harm. The suit alleges that...
TEXAS STATE・8 HOURS AGO