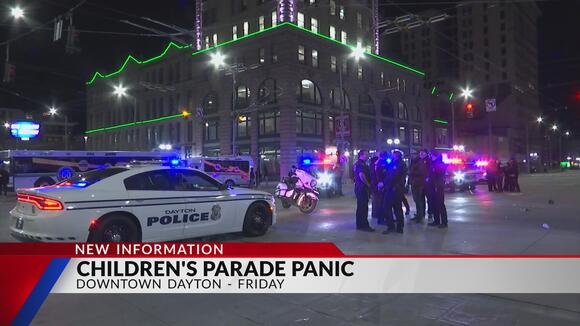 DAYTON, Ohio ( WDTN ) — 4 juveniles have been charged after a shot was fired into the air during the annual Downtown Dayton Children’s Parade last Friday , according to Dayton Police.

Police say they believe a fight broke out between two girls. Police believe a boy then pulled out a gun and fired it into the air. The shot sent the crowd scrambling as people began running from the scene.

No injuries after shot fired near Dayton Children’s Parade

In a statement, police said the investigation is ongoing. The full statement can be read below:

“Dayton Police are continuing to investigate the disturbance during the Dayton Children’s Parade where one shot was fired. DPD is still seeking the person who fired the shot. If anyone was injured as a result of this incident or if you have any additional information about the fight or the gunshot, we ask that you please call the Violent Offenders Unit at (937) 333-1232.

In a related incident , there were 4 juveniles charged with disorderly conduct as well as accompanying charges. Downtown Dayton has a much lower frequency of crime compared to the rest of the city. There have been 9 combined simple and aggravated assaults with a firearm in our central district since January of this year, and not all included a shot being fired. Significant resources are dedicated to downtown too, currently there are 22 officers assigned to downtown Dayton.”

If you have additional information about the fight or the gunshot, call the Violent Offenders Unit at 937-333-1232.

DAYTON, Ohio (WDTN) — A man was taken to the hospital after being shot in Dayton Sunday night. According to Montgomery County Regional Dispatch, someone called 911 shortly before 11 p.m. on Sunday, Jan. 29 reporting that a man had been shot on Home Avenue. The caller was driving...
DAYTON, OH・13 HOURS AGO
WDTN

According to Maj. Brian Johns with the Dayton Police Department, a man later identified as Tyshaun Wilson left a bar in the Oregon district to go to a food truck at the corner of Fifth Street and Pine Street.
DAYTON, OH・4 HOURS AGO
WDTN

2 juveniles in custody after 2 homes shot in Dayton

Police said two homes were struck by gunfire, however, no one inside the residences was injured.
DAYTON, OH・8 HOURS AGO
WDTN

Dayton police details vehicle thefts for the week of Jan. 23

Police again urged owners of these kinds of vehicles to consider getting an anti-theft device such as a vehicle immobilization device, a steering wheel lock, glass-break sensors or battery disconnect switches. They also recommended parking in well-lit areas or in a parking garage if possible.
DAYTON, OH・7 HOURS AGO
WDTN

DAYTON, Ohio (WDTN) — The man accused of causing a fatal crash in Huber Heights while fleeing from police in a stolen BMW pleaded not guilty in court Monday. Cory Harbarger pleaded not guilty on several charges including Aggravated Vehicular Assault and Receiving Stolen Property. Police say Harbarger was fleeing from authorities in a stolen […]
HUBER HEIGHTS, OH・3 HOURS AGO
WDTN

DAYTON, Ohio (WDTN) — Dayton Police have responded to a reported shooting in a Dayton neighborhood. According to Montgomery County Regional Dispatch, police were dispatched to the 300 block of Fernwood Avenue at 1:51 p.m. for a reported shooting into a house. It is not known at this time if anyone was injured. Our 2 […]
DAYTON, OH・1 DAY AGO
WDTN

Man in critical condition after officer-involved shooting in Wyoming

Officials reported that two people were found in the back of the residence and ignored officers when told to stop.
WYOMING, OH・6 HOURS AGO
WDTN

According to the Miami Township Police Department, Shawntia Barnes allegedly stole from 21 residents at The Wellington at Dayton Senior Living Community. These thefts occurred from May until August of 2021 and included jewelry and other personal belongings.
DAYTON, OH・3 HOURS AGO
WDTN

Crews tackled the fire from inside the apartment and searched the building. According to the release, most of the fire came from the crawlspace and garage. At this time, the cause of the fire remains under investigation by the Sidney Fire Department.
SIDNEY, OH・7 HOURS AGO
WDTN

Man sentenced to 56 years in 2020 Ohio shootout with police

“I believe you are dangerous. I believe you are manipulative,” Judge Tim Tepe told Hubbard, who could serve an additional 5.5 years if he misbehaves in prison. Hubbard declined to speak on the advice of his attorney, who has vowed an appeal.
SOMERVILLE, OH・12 HOURS AGO
WDTN

49-year-old Noel Coles, Jr. withdrew a plea of not guilty and pleaded guilty to Voluntary Manslaughter and Aggravated Burglary for the death of his girlfriend 43-year-old Jackie Coles, who was found dead in her home on Weinland Drive in Aug. 2021.
CLARK COUNTY, OH・4 HOURS AGO
WDTN

DAYTON, Ohio (WDTN) — People from across the Dayton area are reacting following the release of the graphic footage showing the arrest of Tyre Nichols. Area resident Jamal Green reacted to the video of Tyre Nichols being severely beaten, and later dying by the hands of five Memphis police officers. “When I initially watched the […]
DAYTON, OH・1 DAY AGO
WDTN

DAYTON, Ohio (WDTN) — One person is dead after a single-vehicle crash on Saturday. According to the Springfield Post of Ohio State Highway Patrol (OSP), 49-year-old Ray Henderson was driving a 1997 Harley Davidson motorcycle in the 1000 block of Scarff Road in New Carlisle around 7:50 p.m. OSP says the preliminary investigation shows Henderson […]
DAYTON, OH・1 DAY AGO
WDTN

DAYTON, Ohio (WDTN) — Law enforcement agencies from across the Miami Valley have began speaking out after graphic footage was released by the Memphis Police Department showing the arrest of Tyre Nichols. Nichols was reportedly pulled over by Memphis Police for a traffic stop on Saturday, Jan. 7 and died 3-days later. Wearing the uniform […]
MEMPHIS, TN・2 DAYS AGO
WDTN

Morgan Steinle, 27, was taken into custody Friday morning for questioning and was then charged with robbery, according to a release from Middletown Police.
MIDDLETOWN, OH・3 DAYS AGO
WDTN

DAYTON, Ohio (WDTN) — Fire crews were called to a Dayton neighborhood for a reported building on fire. According to Montgomery County Regional Dispatch, the Dayton Fire Department responded to Woodside Avenue in Dayton for a fire. No injuries were reported at the time 2 NEWS spoke with authorities. Our 2 NEWS crew on scene […]
DAYTON, OH・2 DAYS AGO
WDTN

When event attendees get to the show this year, they will arrive with parking in-hand, instead of paying to park upon arrival, which creates long lines, according to Franklin.
DAYTON, OH・3 HOURS AGO