JaguarReport is a FanNation channel dedicated to covering the Jacksonville Jaguars 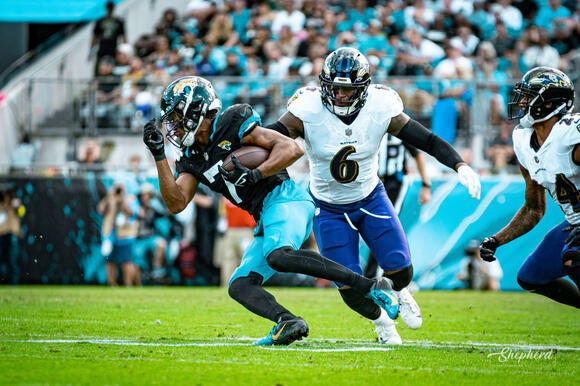 Which Jaguars played the most snaps vs. the Ravens and why?

While watching a game live can give you one impression of a player's usage, looking at the actual amount of snaps they played compared to their teammates can also give insight into the team's strategy and outlook.

When looking at the snap counts for the Jacksonville Jaguars after their 28-27 win over the Baltimore Ravens, it is clear to see what kind of plan the Jaguars went into the game with, and what limitations they had from a personnel standpoint.

Who played a lot, and why? Did the snaps mean anything or nothing? We examine below:

With the annual all-star week drawing to a close, it is worth examining just how often the Jaguars have drafted players from the event in recent years.
JACKSONVILLE, FL・2 DAYS AGO
JaguarReport

With Tee Higgins rumors flying in recent days, Jaguars running back and former Clemson Tiger teammate Travis Etienne made his own subtle pitch to the star wideout.
JACKSONVILLE, FL・22 HOURS AGO
JaguarReport

The Jaguars are adding to their coaching staff in the former of a long-time offensive line assistant.
JACKSONVILLE, FL・2 DAYS AGO
JaguarReport

On the one-year anniversary of Pederson being hired by the Jaguars, it is time to reflect on his first 365 days on the job.
JACKSONVILLE, FL・1 DAY AGO
JaguarReport

What We Learned About the Jaguars in 2022: Special Teams Review

What did the Jaguars' special teams unit show us in Heath Farwell's first year at the helm?
JACKSONVILLE, FL・20 HOURS AGO

JaguarReport is a FanNation channel dedicated to covering the Jacksonville Jaguars