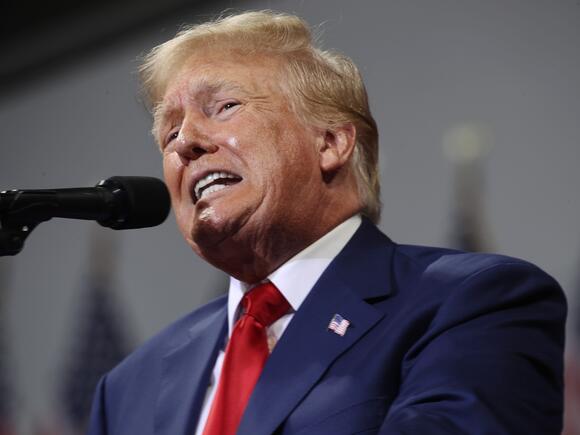 Several GOP leaders, including some potential 2024 rivals, are explicitly condemning embattled former President Donald Trump for meeting with Nick Fuentes, who is widely known as a white supremacist and anti-Semite.

Former Vice President Mike Pence, who is eyeing a 2024 run, called on Trump to apologize for his actions. Even though Pence and Trump have a virtually non-existent relationship following January 6, Pence has sparingly criticized the former president.

"President Trump was wrong to give a white nationalist, an anti-Semite and a Holocaust denier a seat at the table. And I think he should apologize for it," Pence told News Nation host Leland Vittert on Monday.

Trump has claimed that he has no idea who Fuentes was. He has claimed that he tried to give advice to the rapper Ye, formerly known as Kanye West, who was also at the dinner. Ye has made a number of antisemitic comments in recent months, which led multiple companies, including Adidas, to break ties with him. The trio had dinner at Trump's Mar-a-Lago resort last week.

"Ye, formerly known as Kanye West, was asking me for advice concerning some of his difficulties, in particular having to do with his business. We also discussed, to a lesser extent, politics, where I told him he should definitely not run for President ...," Trump wrote on his social media platform, Truth Social. Trump added that West "expressed no anti-Semitism" during the dinner.

Fuentes, a 24-year-old widely known as a white nationalist, has a long history of blatantly racist and anti-Semitic comments. Far-right Reps. Marjorie Taylor Greene of Georgia and Paul Gosar of Arizona spoke at a conference of a Fuentes-founded organization prompting uproar among lawmakers. House Minority Leader Kevin McCarthy called their attendance "unacceptable."

Here's the list of Republicans who have condemned Trump thus far:

"President Trump was wrong to give a white nationalist, an anti-Semite and a Holocaust denier a seat at the table. And I think he should apologize for it," Pence told News Nation host Leland Vittert on Monday.

"There is no room in the Republican Party for anti-Semitism or white supremacy. And anyone meeting with people advocating that point of view, in my judgement, are highly unlikely to ever be elected President of the United States," McConnell said at a press conference on Tuesday.

Sen. John Thune of South Dakota, the No. 2 Senate Republican:

"Well, that's just a bad idea on every level," Thune told NBC News . "I don't know who is—who's advising him on his staff, but I hope that whoever that person was got fired."

"President Trump hosting racist antisemites for dinner encourages other racist antisemites,"  Cassidy wrote on Twitter. "These attitudes are immoral and should not be entertained. This is not the Republican Party."

"It was wrong & inappropriate to have that meeting, white supremacy has no place in our nation's culture & it's antithetical to anything we stand for as Americans," Portman told reporters, per NBC News. Portman is retiring and will be replaced by author JD Vance, Trump's hand-picked successor for the seat.

Republican National Committee chair Ronna McDaniel did not mention Trump specifically while rejecting Fuentes' ideology. "As I had repeatedly said, white supremacy, neo-Nazism, hate speech and bigotry are disgusting and do not have a home in the Republican Party," she said in a prepared statement.

Scott, who is reportedly eyeing a 2024 campaign, did not mention Trump directly. "There's no room in the Republican Party for white supremacist anti semitism, so it's wrong," Scott told reporters, per NBC News.

Sen. Steve Daines, who will join the party's leadership, did not mention Trump specifically in his comments to reporters. "We cannot tolerate antisemitism, period," Daines said, per NBC News.

"I don't think it's a good idea for a leader that's setting an example for the country or the party to meet with [an] avowed racist or antisemite," Hutchinson told CNN on Sunday. Hutchinson, a two-term governor who will soon be leaving office. He has said he is "very seriously" considering a 2024 presidential campaign.

"This is just another example of an awful lack of judgment from Donald Trump, which, combined with his past poor judgments, make him an untenable general election candidate for the Republican Party in 2024," the one-time Trump ally and likely 2024 presidential contender told The New York Times.

"First, @RepMTG and now, @realDonaldTrump hanging around with this anti-Semitic, pro-Putin, white supremacist. This isn't complicated. It's indefensible," Cheney, the top Republican on the House January 6 committee, wrote on Twitter. Cheney ran for re-election, but lost her Wyoming seat to attorney Harriet Hageman, a Trump-endorsed newcomer.

"The brown shirts shouldn't intimidate you," Kinzinger, the only other Republican on the January 6 committee, wrote on Twitter. "They are all incels with no self esteem. Hey @GOPLeader, @RepMTG had spent some time with Nick here, how does that sit with you?  You cool with holocaust denial etc?  Probably right?" Kinzinger is retiring at the end of the current congressional session.

'You're An Embarrassment': Kimberly Guilfoyle Gets Backlash For Making Fun Of The FBI's Skills When Raiding President Joe Biden's Home For Documents

Kimberly Guilfoyle tried to crack a joke, but it didn't go over well with some of her followers. On Thursday, January 26, the TV personality, 53, uploaded a photo of two kids in play cards with the caption, "THE FBI PREPARING TO RAID THE BIDEN RESIDENCE." Guilfoyle, who is engaged...
2 DAYS AGO
CNN

Fewer than one-third of Americans believe that House GOP leaders are prioritizing the country's most important issues, according to a new CNN Poll conducted by SSRS. Neither party's congressional leadership earns majority approval, and Republicans are particularly likely to express discontent with their own party leadership.
3 DAYS AGO
Business Insider

Trump, who referred to Putin as a "genius" the week Russia invaded Ukraine, was once impeached over his dealings with Kyiv.
3 DAYS AGO
Benzinga

A top Russian diplomat warned the U.S. in July 2022 against proceeding with efforts to bring the country before an international war court. 'Wrath Of God:' Dmitry Medvedev, the deputy secretary of Russia's Security Council, said the U.S. may have to face the "wrath of God" if it helps set up an international tribunal to investigate Russia's action in Ukraine, the Associated Press reported.
13 HOURS AGO
Business Insider

Musk's apology came a day after the release of bodycam footage showing the attack on the husband of former House Speaker Nancy Pelosi.
SANTA MONICA, CA・20 HOURS AGO
Business Insider

Rep. George Santos' campaign for Congress in 2022 was ultimately successful, but people who worked with him do not remember it fondly.
1 DAY AGO
Toby Hazlewood

On January 26, the House of Representatives voted on an amendment proposed by Georgia's most controversial and divisive Republican - Marjorie Taylor-Greene. The proposal was intended to prevent the Biden Administration from selling oil from the Strategic Petroleum Reserve.
GEORGIA STATE・2 DAYS AGO
Business Insider

'Trump Organization' is branding shorthand, so it can't be sued, the defendants said repeatedly in the lengthy court filing.
WASHINGTON STATE・2 DAYS AGO
The Independent

Rollan Roberts II’s longshot bid the White House got off to an inauspicious start when his wife collapsed on to the floor in the middle of his kickoff speech. Ms Roberts, who is pregnant with the couple’s first child, was standing by as Mr Roberts detailed why Americans might consider him for the presidency in 2024, until she wobbled slightly and fell to the ground. Rollan Roberts II announces he is running for president this week, when his five-months pregnant wife passes out. She was fine, and Roberts was obviously highly concerned. Hell of a start to Rollan Roberts 2024!...
WEST VIRGINIA STATE・3 DAYS AGO
Business Insider

"So somehow, the only people who are not allowed to know what was in there are congressional oversight committees," Rubio said.
FLORIDA STATE・13 HOURS AGO
Business Insider

"There's been conversations, but nothing's been finalized," Rep. Ocasio-Cortez told Politico of potentially becoming the No. 2 Democrat on Oversight.
MARYLAND STATE・1 DAY AGO
Business Insider

"There's been this attack on law enforcement, and you're not getting the best of the best," Jordan said of the state of many police departments.
MEMPHIS, TN・12 HOURS AGO
Business Insider

"We are not deliberating or considering any other kind of alternative approach," a White House official told reporters on student-debt cancellation.
2 DAYS AGO
Business Insider

"He is obsessed with retaking Ukraine," former Secretary Gates said of Putin, who launched the war in Ukraine last February. "He will hang in there."
11 HOURS AGO
Business Insider

Pelosi attack suspect says he was motivated by politics, telling police that Democrats had been 'persecuting' Trump

The ex-DHS secretary provided services to the Supreme Court before he was tasked with independently reviewing the leak investigation, CNN reported.
2 DAYS AGO
Business Insider

Matt Gaetz says it's fine that fellow Kevin McCarthy speaker vote rebels got plum gigs and he seemingly got nothing else out of the leadership tussle.
FLORIDA STATE・2 DAYS AGO
Business Insider

Some donations from George Santos' failed 2020 campaign are attributed to addresses that don't exist, report says

More than a dozen donations listed in the New York congressman's 2020 campaign filings could not be verified, Mother Jones reported.
CALIFORNIA STATE・2 DAYS AGO