No. 3 Virginia prepared for Michigan’s ‘quality’ 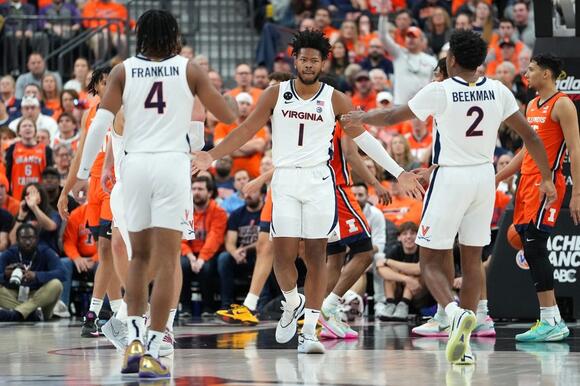 No. 3 Virginia already has victories over a pair of ranked teams yet sees Tuesday’s road matchup against unranked Michigan as perhaps the biggest obstacle to date.

The teams will square off in the annual ACC/Big Ten Challenge at Ann Arbor, Mich.

“Every game will present different challenges,” Virginia head coach Tony Bennett said. “Now you’ll go in a hostile environment against a high-quality team with size and ability, and you’ll have to do the same and outlast ‘em.”

The Cavaliers (5-0) defeated then-No. 5 Baylor and then-No. 19 Illinois in a three-day span at Las Vegas before their latest victory, a 72-45 home triumph Friday over Maryland-Eastern Shore.

Forward Jayden Gardner had 26 points in 25 minutes against the undersized Hawks. Gardner averaged 15.3 points last season but was averaging just 7.8 points this season before his outburst.

“That was good to see,” Bennett said. “I think he’s been a little bit rushed at times, but we’re going to need that offensive punch that he gives us, because when he’s aggressive, but not rushing, that’s when he’s at his best and I think that really helps us.”

The Wolverines (5-1) haven’t played since Wednesday, when they defeated Jackson State at home 78-68. Michigan led by 21 with 8:49 to go and held off the Tigers’ late charge.

“The last five minutes, they made some shots and there were a couple of turnovers by us which were uncharacteristic turnovers,” Michigan coach Juwan Howard said. “We’ll grow from it.”

Michigan’s Hunter Dickinson had a quiet offensive night with nine points. He was a force in other areas, grabbing 12 rebounds and blocking four shots.

Virginia’s Kadin Shedrick (11.2 points, 5.2 rebounds) will match up against Dickinson on Tuesday.

The Wolverines swatted 13 shots on Wednesday, tying the second-most blocks in a single game in program history.

“We have guys that are very competitive,’ Howard said. “They take the one-on-one challenge, and they also do a very good job of contesting shots.”

Howard’s son Jett had a team-high 19 points along with three blocks.

In the previous two games, the Wolverines were blown out by Arizona State 87-62 on a neutral court at New York and needed overtime to subdue Ohio at home 70-66.

The team is having its issues from 3-point range (31.8 percent) and from the free-throw line (66.9). The Wolverines showed improvement in those areas against Jackson State, making 40 percent of their 3-pointers and 84.2 percent of their foul shots.

“When you get open looks, our young men are smart enough to be able to take what the defense gives them,” Howard said. “We shot 30 (3-pointers). I don’t find anything wrong with that. Forty percent? I’ll take that any day.”

Tuesday’s game will be Michigan’s first against a ranked opponent. The Wolverines will match up against another ranked team, No. 19 Kentucky at London on Sunday.

“It’s early in the season. I’m sure a lot of teams like us are not playing their best basketball,” Howard said. “We will get better and better, game-by-game. I look at every game that we play as high-profile opponents.”

Michigan hasn’t faced Virginia since an ACC/Big Ten Challenge game in November 2011, which ended in a 70-58 Cavaliers victory.

A key lineup change, the improved health of its best player and an explosive wild card playing an increased role
CHARLOTTESVILLE, VA・1 DAY AGO
Sportsnaut

Purdue enters its Thursday visit to Michigan on a six-game winning streak and back in possession of the top spot
WEST LAFAYETTE, IN・2 DAYS AGO
Sportsnaut

Iowa has won its last three matchups against Michigan State. The Hawkeyes will look to extend that streak when they
IOWA CITY, IA・2 DAYS AGO
Sportsnaut

The leading contenders for the top pick in this year’s draft cross paths in Detroit on Saturday night. It’s the
DETROIT, MI・10 HOURS AGO