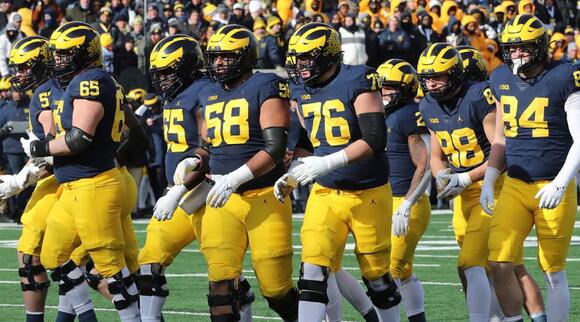 Plus more notes on Week 13 of the college football season, including thoughts on whether Jim Harbaugh would return to the NFL, players skipping bowl games and more.

More MMQB: For Jacoby Brissett, a Day of Rain, Tears and One Last Win With the Browns | Three Deep: Inside Justin Jefferson’s Milestone Day Against the Patriots | Ten Takeaways: Eagles Run Over Packers; Saleh Right to Bench Wilson

The last few years, my Six From Saturday notes have been included at the bottom of my MMQB column on Monday mornings. This year, they’ll be published as a separate post each week. Here are my thoughts on this weekend’s college action, geared mostly toward what should be of interest to NFL fans.

1) A lot will be made of the coach and quarterback and running back, and all of that, after Michigan’s 45–23 win over Ohio State , and rightfully so. But being in the stadium Saturday, one thing that seemed obvious was that the Wolverines are really built around their physical, grinding offensive line. And the amazing thing is that it’s actually not the result of roping in a bunch of five-star recruits. They have a sixth-year center, a fifth-year left tackle, a fourth-year left guard and right tackle, and a third-year right guard, all of whom came into this season with at least a full season’s worth of starts under their belts. And it’s worked to their advantage, for the most part, that there are good but maybe not great NFL prospects in the group. One veteran evaluator told me Sunday that the left tackle, Ryan Hayes, is probably an early–Day 3 pick, and opinions vary on center Olu Oluwatimi, with the likelihood being he’s a Day 3 pick, too. What that’s done is keep the guys in school and allow for continued development, and the result is the sort of identity Jim Harbaugh’s hung his hat on when he’s been at his best at Stanford, with the 49ers and earlier in his time at Michigan. And that identity travels, is all-weather and took out a team full of second- and third-year guys who’ll wind up being top-100 picks (with a host of future first-rounders).

2) It’ll be interesting to see what happens with Harbaugh after this season. On one hand, he’s got Michigan in a really good place right now. On the other, his feeling that he has unfinished business in the NFL goes all the way to when he left the league, in early 2015. He’ll turn 59 in December, and he’d be the ninth-oldest head coach in the league if he jumped now—which is to say the clock is probably ticking on his going back to the pros. His first couple of years at Michigan, teams relatively routinely checked in on his availability, but interest cooled significantly when the Wolverines’ program dipped a few years back. Last year interest was more from Harbaugh than teams, as he fished around before his contract to stay at Michigan was done. Will there be more interest now? It’s an interesting question. In an NFL context, I always viewed him a little like Bill Parcells. He can come in and effect change right away, but, at least in San Francisco, he wound up wearing people around him out (it’s a little easier to avoid that in college because of the natural roster and staff turnover that occurs). So if someone is looking for an instant kick in the pants, knowing it might not be a 10-year answer, then I can see such a team making that call.

3) This week, we’ll start to see kids declaring for the draft and announcing they’ll skip their bowl games to go to Florida, Texas, Arizona or California to prepare for the draft. I’d guess Texas RB Bijan Robinson will be one of those guys, and he’s got at least a chance to be the first back to go in the top 20 in a half decade (Saquon Barkley was the last one). And the reason for that is that he, like Barkley, Zeke Elliott and Todd Gurley, is the rare 230-pound back who can effectively be both your workhorse inside runner and your versatile third-down back. “He’s a three-down, Day 1 starting running back,” said an NFC exec. “Strong and powerful with good balance, attacks the edges of a defense well, good on third down, good in protection and catches the ball well out of the backfield. Most scouts will comp him to Saquon, but he runs physical like Zeke.” The expectation in Austin, per this scout, is that Robinson will run in the 4.45 range, which would put his number right around Elliott’s. His case will be an interesting one, of course.

4) Nebraska’s going to be an interesting challenge for Matt Rhule. The Huskers haven’t won with any consistency in 20 years. Their geography is a problem (three hours from Kansas City, five and a half from Oklahoma City and further from bigger cities). So is the fact that their old formula (physical, option-based run game) isn’t exactly conducive to attracting recruits who are more and more focused on finding a way to the NFL. Which is why, to me, at least, hiring Rhule was the right idea. He showed an ability to figure it out in a high-pressure environment, with conditions more adverse than the ones in Lincoln, over three years at Baylor, following a major scandal. Of course, I also thought Scott Frost was the idea hire for a program that’s now going on two decades of failing to meet, or come close to, the impossibly high standard Tom Osborne once set. So we’ll see what happens.

5) It’ll be interesting to see whether Bryce Young, C.J. Stroud and/or Will Levis decide to sit out their bowl games (assuming Young’s and Stroud’s teams miss the College Football Playoff). We’ve seen plenty of guys opt out of playing in the holiday exhibitions since Christian McCaffrey and Leonard Fournette broke the seal on that sort of thing six years ago. But with a quarterback, it’s a little different, because his absence can destabilize a team. That said, last year’s lone first-round quarterback, Kenny Pickett, did it, and I doubt he’ll be the last one to.

6) My playoff field: Georgia, Michigan, TCU and USC. Nice and clean, so long as things hold next week. And if they don’t? Between an Ohio State team that collapsed in the fourth quarter of its biggest game and two-loss Alabama, there’s a lot of talent, but it’d be hard to say either earned its way into the Playoff.

Patrick Mahomes' wife, Brittany, wants all the smoke.  Brittany, who's never been afraid to speak her mind on social media, just posted a message for the Bengals.  Hint: It's not very friendly.  "Cancun on 3," she said on Twitter.  "Cancun on 3" has become a trendy phrase in the ...
CINCINNATI, OH・2 DAYS AGO
The Spun

It’s the sound of hearts breaking across Philadelphia and the state of Pennsylvania… and let’s be honest, everywhere else in the country, too. Eagles quarterback Jalen Hurts made a very rare public appearance with his girlfriend Bryonna “Bry” Burrows after the NFC Championship game this past Sunday, which is a surprise to many fans, as he is extremely private about his life outside of football.
PHILADELPHIA, PA・19 HOURS AGO
Yardbarker

The Pittsburgh Steelers and Philadelphia Eagles have been in the NFL since its inception. The two teams even briefly combined forces during World War II and called themselves the Steagles. The players and coaches didn’t like it then and the two fan bases don’t like each other now. Fans from the same state rarely get along and the vitriol was on display after the Eagles made their second Super Bowl in five seasons.
PHILADELPHIA, PA・1 DAY AGO
Sports Illustrated

With tears in his eyes, the Cincinnati defensive end addressed what he was thinking on the play.
CINCINNATI, OH・1 DAY AGO
OnlyHomers

Once again, the Dallas Cowboys failed to make a deep playoff run as they fell short losing to the San Francisco 49ers 19-12 last Sunday in the divisional round of the playoffs. The elite offense of the Dallas Cowboys sputtered and struggled, which lead to Jerry Jones and head coach Mike McCarthy to make a tough decision.
DALLAS, TX・1 DAY AGO
Sports Illustrated

It wasn’t the ruling (which was correct) or the rule (which makes sense) that bothers us. No, what bothered us was the punishment the Bengals received late in Sunday’s game.
CINCINNATI, OH・1 DAY AGO
Sports Illustrated

The Denver Broncos wanted to make a splash when hiring their next head coach, and they have done just that. Sean Payton has reached an agreement to become the head coach of the Broncos, according to multiple reports. The Broncos have agreed to a compensation package with the New Orleans Saints, who previously held Payton’s... The post Sean Payton lands head coach job appeared first on Larry Brown Sports.
DENVER, CO・14 HOURS AGO
Sports Illustrated

The Chiefs tight end called the Cincinnati mayor a ‘jabroni’ after the team’s win.
CINCINNATI, OH・20 HOURS AGO
Sports Illustrated

The two-time MVP’s move to the reigning champs in Las Vegas means she has the chance to close out her storied career with a third WNBA title.
LAS VEGAS, NV・2 DAYS AGO
Sports Illustrated

The former Cowboys offensive coordinator is heading to the AFC.
1 DAY AGO
Sports Illustrated

The hiring comes after Denver fired Nathaniel Hackett after 15 games in his first season.
DENVER, CO・15 HOURS AGO
Sports Illustrated

The quarterback is still contemplating whether he will return for his 19th NFL season or not.
GREEN BAY, WI・16 HOURS AGO
Sports Illustrated

Jimmy Garoppolo was having a great year—until he wasn't. He may find greener pastures via free agency.
17 HOURS AGO
Sports Illustrated

Denver does not have a long-term solution at quarterback, has traded away future draft capital and may have expensive decisions ahead. That sounds a lot like New Orleans.
DENVER, CO・13 HOURS AGO
Sports Illustrated

This men’s season hasn’t been defined by the usual bluebloods. Plus, notes on the bubble, the Big 12’s dominance and more.
ALABAMA STATE・1 DAY AGO