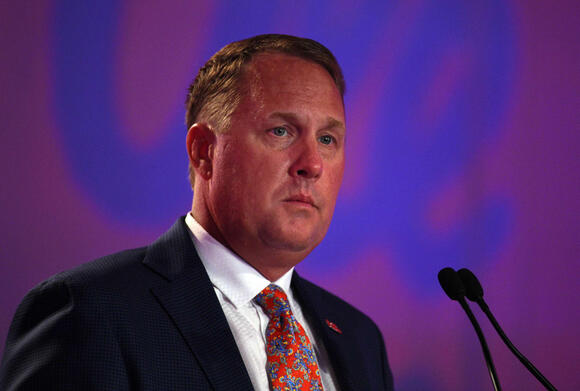 "After a thoughtful, thorough, and well-vetted search, we ended where we started, with Hugh Freeze," Auburn athletic director John Cohen said.

"Of all the candidates we considered, Hugh was the best fit. Fit has several meanings, but the most important factors were student-athlete development, football strategy, recruiting and SEC experience."

Auburn says that Freeze was its first option, but multiple reports contend that the school planned to hire Lane Kiffin to replace Bryan Harsin, but Kiffin elected to stay at Ole Miss, forcing Auburn to move to what reports called its "Plan B" instead, tabbing the former Liberty and Ole Miss coach.

Freeze amassed a 34-15 record in three seasons with the Flames program and has experience in the SEC after leading Ole Miss to a 10-3 campaign and a second-place finish in the SEC West in the 2015 football season.

That history appears to be the main attraction from Auburn's side. Freeze had an overall 39-25 record, including eventual vacated wins, with the Rebels from 2012 to 2016 and, perhaps most importantly, beat Alabama in back-to-back seasons in 2014 and 2015.

Auburn has lost the previous three games against its arch-rival in the Iron Bowl and four of the last six.

That 2015 season resulted in the Rebels earning a berth in the Sugar Bowl and a No. 9 position in the top 25 rankings, a season that didn't involve any of the program's eventual vacated wins.

Ole Miss dismissed Freeze prior to the 2017 season after reports discovered that he made inappropriate phone calls from his school-issued cell phone.

An NCAA investigation then uncovered a lack of institutional control, after which Ole Miss was penalized with a two-year bowl ban and a two-game conference suspension if Freeze was hired by an SEC school prior to November of 2018.

Freeze spent two years away from college football before being hired by Liberty in 2019, and he went on to win at least eight games in each season, including three straight bowl games, and a 10-1 mark in the 2020 season.