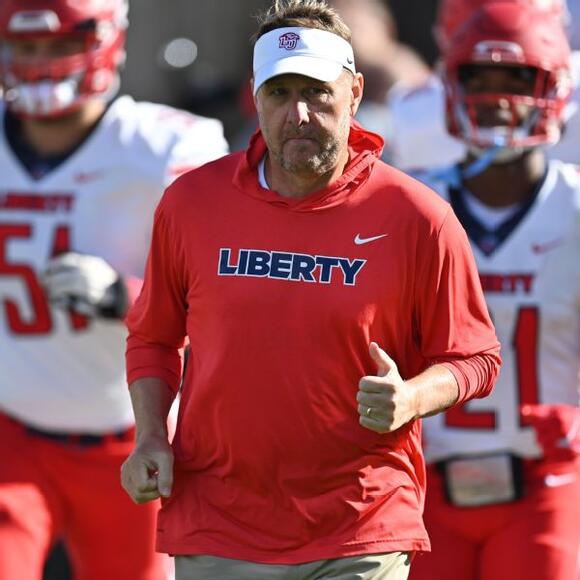 Hugh Freeze has agreed to a deal to become Auburn 's next head football coach, the school announced Monday.

Auburn administrators, including athletic director John Cohen, met with football staff members earlier in the day to tell them about Freeze's hiring. They were planning to meet with the players at 6 p.m. ET, and Freeze was scheduled to arrive on campus later Monday evening, sources told ESPN.

"After a thoughtful, thorough, and well-vetted search, we ended where we started, with Hugh Freeze," Cohen said in a news release. "Of all the candidates we considered, Hugh was the best fit. Fit has several meanings, but the most important factors were student-athlete development, football strategy, recruiting and SEC experience."

Freeze has spent the past four seasons at Liberty, where he took the Flames to unprecedented heights. He's widely regarded as one of the top offensive minds in the game. This will be Freeze's second head-coaching stint in the SEC, as he led Ole Miss' program from 2012 to 2016. He beat Alabama and Nick Saban in back-to-back seasons in 2014 and 2015 and capped the 2015 season with the Rebels' first Sugar Bowl victory since 1970.

"First, I want to acknowledge Cadillac Williams for the incredible job he did as interim head coach," Freeze said in the release. "The impact he made is immeasurable and cannot be overstated. Secondly, Auburn is one of the preeminent programs in college football and I'm very appreciative of President [Chris] Roberts and John Cohen for this opportunity at Auburn.

"I've been fortunate to witness first-hand how special Auburn is during my time as a head coach in the SEC and while visiting my daughter Jordan who attended Auburn and currently lives in the community. I can't wait to work with our student-athletes and the Auburn family to bring championships back to the Plains."

In the weeks leading up to the start of Ole Miss' preseason practice in 2017, Freeze resigned after university officials discovered he had made a series of calls to multiple numbers associated with an escort service. Ole Miss was placed on NCAA probation in 2017 for violations that occurred in part under Freeze, and the sanctions included a two-year bowl ban.

Freeze, while cited by the NCAA Division I Committee on Infractions for failure to monitor his assistant coaches and the school's boosters, did not receive a show-cause penalty and "promoted an atmosphere of compliance," according to the NCAA report.

New Auburn athletic director Cohen, who was hired Oct. 31, had narrowed his search to Ole Miss' Lane Kiffin and Freeze. Kiffin said Saturday that he was staying at Ole Miss and signing a new deal worth $9 million per year.

Freeze, 53, replaces Bryan Harsin, who was fired Oct. 31, two days after Auburn's 41-27 home loss to Arkansas. Harsin was 9-12 overall in less than two seasons at Auburn, which experienced repeated struggles on offense under him and had difficulty sustaining success on the recruiting trail.

Former athletic director Allen Greene, who hired Harsin, negotiated a settlement with the university to leave in August. Greene was entering the final five months of his contract, and sources told ESPN his deal was not going to be renewed after the season.

Harsin looked as if he might be out after Year 1 and survived a university-directed investigation in January after a mass exodus of players and assistant coaches. He was retained after then-school president Jay Gogue said the process "did not yield information that should change the status of our coaching staff or football program." Harsin came to Auburn from Boise State and had never previously coached in the SEC. He finished 4-11 against Power 5 opponents at Auburn.

Auburn owes Harsin a $15.5 million buyout, and 50% of that is due within 30 days of his termination.

Freeze agreed to a new eight-year deal at Liberty in October with an average salary of just under $5 million annually, making him one of the highest-paid Group of 5 coaches in the country. Liberty football accomplished several firsts on Freeze's watch, including its first AP national ranking and the program's first wins over an ACC and an SEC school.

Freeze becomes Auburn's third head coach in the past four years. Gus Malzahn, currently at UCF, was fired at the end of the 2020 season. Harsin lasted parts of two seasons before being fired. The Tigers last won an SEC championship in 2013, Malzahn's first season as head coach; they also played in the BCS title game that season, losing to Florida State.

In the past 12 seasons, Auburn has won a national championship (2010) and played for one (2013). Only five other schools in college football can make that claim during that span -- Alabama, Clemson, Georgia, LSU and Ohio State.

Get ready Auburn, after suffering through 1 1/2 years of a bad hire…Harsin. You just made another fatal error that will haunt you soon. Be ready to be on probation in less than 18 months. Then will you not only fire a coach and pay more millions, but you will lose scholarships and be banned from post season play a few seasons. That is if you can even win enough games to be bowl eligible, right now the money and probation are your largest concerns.

The mid-January series affects NCAA tournament résumés, provides a break from hectic conference play and showcases some of the best talent in men's college basketball.
KANSAS STATE・2 DAYS AGO
ESPN

Ryan Nielsen, who coached the defensive line for the Saints since 2017, has been hired by the Falcons as the team's new defensive coordinator.
ATLANTA, GA・2 DAYS AGO
The Big Lead

Caesars Sportsbook and others opened the line on Super Bowl LVII at pick 'em Sunday night before the Eagles emerged as 2-point favorites over the Chiefs within 30 minutes of the line posting.
KANSAS CITY, MO・17 MINUTES AGO
ESPN

Jalen Hurts reflected on his journey from being a controversial draft pick in 2020 to leading the Eagles to a Super Bowl in his second year as the full-time starting quarterback.
PHILADELPHIA, PA・1 HOUR AGO
ESPN

Steve Wilks, who went 6-6 as interim coach of the Panthers, was "disappointed but not defeated" after Frank Reich was hired for the full-time job.
CHARLOTTE, NC・2 DAYS AGO
ESPN

Keyontae Johnson had 13 points and 11 rebounds in a sentimental matchup with the Gators, helping No. 5 Kansas State to a dominant 64-50 victory in the Big 12-SEC Challenge.
MANHATTAN, KS・1 DAY AGO
ESPN

Our experts give their instant reaction to the opening spread and total for Super Bowl LVII between the Philadelphia Eagles (14-3) and the Kansas City Chiefs (14-3).
KANSAS CITY, MO・25 MINUTES AGO
ESPN

The Tigers shine against Lindenwood and Texas Woman's, sealing the victory with a road score of 196.800, the highest road score of the season.
COLUMBIA, MO・2 HOURS AGO
ESPN

Vic Fangio has agreed with the Dolphins to become the team's defensive coordinator, a source confirmed to ESPN.
DENVER, CO・8 HOURS AGO
ESPN

Joe Burrow and the Cincinnati Bengals are a win away from the Super Bowl. With their Cartier and Gucci-wearing, trash-talking QB leading the way, they're doing it in style.
CINCINNATI, OH・1 DAY AGO
ESPN

The Cincinnati Bengals and Kansas City Chiefs met once again in the AFC Championship Game. Here are the best moments and takeaways from Sunday's action.
CINCINNATI, OH・51 MINUTES AGO
ESPN

Doug explains the impact of the uncertainty surrounding Patrick Mahomes, as well as his favorite plays for the NFL's Conference Championship weekend.
16 HOURS AGO
ESPN

The Dolphins are not expected to pursue Tom Brady should the star QB decide he wants to return for the 2023 season, league sources told ESPN's Adam Schefter.
15 HOURS AGO
ESPN

No. 2 Ohio State dropped its third game in a row, a 73-65 loss to unranked Purdue in women's basketball.
COLUMBUS, OH・5 HOURS AGO
ESPN

Stanford star Cameron Brink recorded the second triple-double with blocks in Pac-12 history, helping to propel the Cardinal to a 62-54 victory Sunday over the Oregon Ducks at Maples Pavilion.
STANFORD, CA・3 HOURS AGO
ESPN

Broncos owner Greg Penner and Michigan coach Jim Harbaugh went through with a follow-up meeting about Denver's head-coaching position last week but it did not materialize in a deal, sources told ESPN.
DENVER, CO・1 DAY AGO