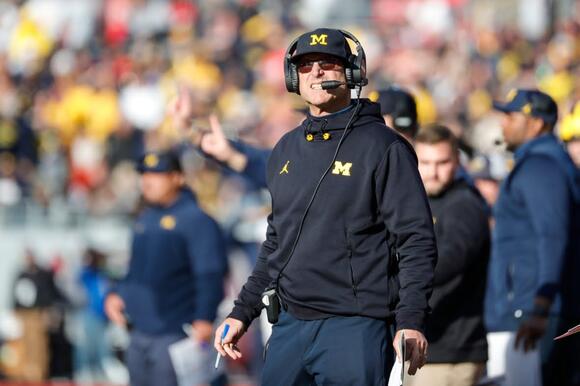 We’re approaching bowl season across college football, which means NFL teams are starting to tense up as they compete for one of 14 playoff spots. For Michigan Wolverines head coach Jim Harbaugh, he nearly found himself in the latter group, fighting his way through a 17-game season leading an NFL team.

After flirting with the Minnesota Vikings , where many felt Harbaugh’s hiring was inevitable , the former NFL QB realized it would be best if he simply returned to Michigan to finish what he started. While some of that may have had to do with the fact that the Vikings were apparently already zeroed in on hiring Kevin O’Connell , it appears all parties made the right choice.

Harbaugh can look back and laugh at it all now, with his Wolverines going undefeated at 12-0, in position for the College Football Playoff . What happens if Michigan wins the National Championship? Then what?

We’ve heard in the past about Harbaugh’s desire to win a Super Bowl, something his older brother, John, accomplished with the Baltimore Ravens in 2012 by beating Jim and the San Francisco 49ers. While Jim later brushed off this burning desire to win a ring at the NFL level, it’s hard to imagine the urge has dissipated entirely.

As we said, what happens if Michigan wins the College Football National Championship? What else would the coach have to accomplish in Ann Arbor? Better yet, what better time to campaign for another NFL head coaching gig, where he’d likely be the top candidate available in the 2022/23 hiring cycle?

If Harbaugh started getting sweet on the NFL again, which teams might have an interest in the former NFL QB and head coach?

No matter what, if Michigan’s season ends on a sour note or a positive one, NFL teams will be back at Harbaugh’s door, trying to recruit him, instead of the other way around.

Harbaugh’s proven his mettle not only back during his days with the 49ers, where he held a .695 win percentage across four seasons, including two NFC Conference Championship appearances but now he’s also knocked the Michigan job out of the park. Harbaugh also holds a career .694 win percentage across 12 seasons coaching at Stanford and now Michigan.

In other words, we know who Harbaugh is, and he seems to have a win rate of 69%, no matter what level he’s at.

Of course NFL teams want a taste of that success.

Now, according to The Athletic’s Mike Sando’s sources , Harbaugh could even be a fit for the current head coaching vacancy with the Indianapolis Colts, who he played four seasons with from 1994-1997.

Making this fit all the more fascinating are his ties to current owner Jim Irsay, who has been with the team in some capacity since 1984.

While Jeff Saturday is serving as head coach on an interim basis, how could the Colts say no to Harbaugh? One AFC executive believes it’s a perfect fit.

“I lean toward yes on Indy. It’s gotta be a spot where there is affection for him. He is quirky. I think Irsay has affection for him. You are getting a guy who has won in the league, went to a Super Bowl, has done it all. And he has won there in Indy as a quarterback. I would think Denver could make sense as well, that Harbaugh had some affinity for (Russell) Wilson.”

Unnamed AFC executive, speaking to Mike Sando of The Athletic

Interestingly enough, the AFC exec also included the Broncos, who hired Nathaniel Hackett just a season ago. While that experiment isn’t working out , it’s possible the new ownership decides they want a big name, like Harbaugh, instead and would be willing to pay a king’s ransom for his services.

While we’re still a couple of months away, expect Harbaugh to be a top candidate considered for any NFL head coaching gig that may pop up this offseason.

Related: Who is the highest-paid NFL coach? (Today and All-Time)

The Hall of Fame quarterback was not happy with the officials during the last of Sunday’s three flag football games.
19 HOURS AGO
Sportsnaut

Houston Texans head coach DeMeco Ryans could be on the verge of making his first significant additions to the coaching
HOUSTON, TX・1 HOUR AGO
The Comeback

Shocking and frankly terrifying news broke regarding Memphis Grizzlies superstar Ja Morant on Sunday afternoon. The story doesn’t quite paint the 2022 Most Improved Player or his associates in the most positive of lights either. The Athletic delivered a bombshell report that detailed the shocking incident. It occurred last month after a game between Morant’s Grizzlies Read more... The post NBA world reacts to absolutely shocking Ja Morant news appeared first on The Comeback: Today’s Top Sports Stories & Reactions.
MEMPHIS, TN・21 HOURS AGO
Sportsnaut

The Kansas City Chiefs are set to play in their fifth Super Bowl on Sunday and their third since 2019.
KANSAS CITY, MO・7 HOURS AGO
Sportsnaut

Tom Brady states he will not start his broadcasting career with FOX Sports until the fall of 2024 after speaking to network executives last week.
FLORIDA STATE・52 MINUTES AGO
Sportsnaut

The Kansas City Chiefs and Philadelphia Eagles will be competing for the Lombardi Trophy on Sunday, but Super Bowl LVII
PHILADELPHIA, PA・2 HOURS AGO
Sportsnaut

The Madden NFL 23 video game is predicting a change to the recent run of competitive Super Bowls — the
KANSAS CITY, MO・2 HOURS AGO
Sportsnaut

Tom Brady not joining FOX until 2024

Tom Brady will take the 2023 football season off, delaying his debut as a FOX Sports analyst until the 2024
1 HOUR AGO
Sportsnaut

While there is hope among the Denver Broncos organization that incoming head coach Sean Payton can fix the issues in
DENVER, CO・2 DAYS AGO
Sportsnaut

Most of the focus heading into Super Bowl LVII between the Philadelphia Eagles and Kansas City Chiefs has been on
KANSAS CITY, MO・2 HOURS AGO
Sportsnaut

Despite a loss to in-state rival Indiana, Purdue remains No. 1 team in the latest Associated Press Top 25 poll
WEST LAFAYETTE, IN・1 HOUR AGO
Sportsnaut